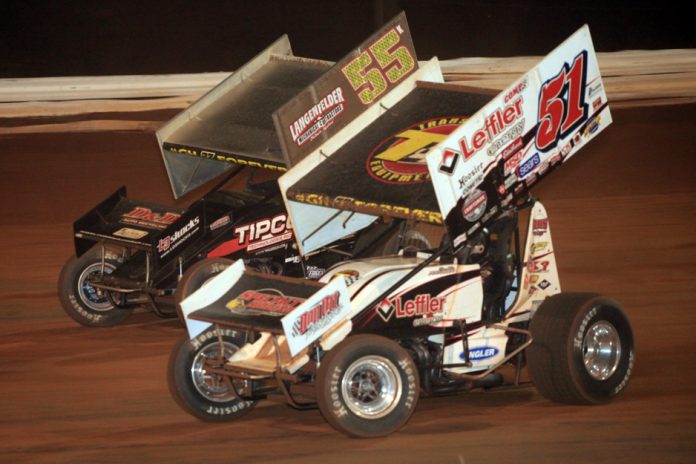 MECHANICSBURG, PA – Freddie Rahmer scored his second win of the season Friday night at Williams Grove Speedway, earning $4,080 for the sprint car win that was the eighth of his career at the speedway.

In the Tri-Track Late Model Challenge Series for super lates, York’s Rick Eckert scored his second oval win of the season as well, making a clean sweep of his events by setting fast time, winning his heat and then the main event.

Chad Trout started second in the 25-lap 410 sprint car main and took the lead over polesitter Rodney Westhafer when action began as Rahmer came to second from fourth on the opening lap.

Rahmer raced in Trout’s shadow for the first six laps before finally getting the lead.

Prior to taking control, he raced to Trout’s outside repeatedly in the third and first turns only to be forced to fall back in line just behind the leader.


But he was finally able to get far enough around Trout to complete the pass in the first and second turns on the seventh tour.

“I just moved up a half lane and had a little better exit,” Rahmer said of how he got the lead.

“Once you get by yourself you can really focus on hitting your marks and managing your wheel spin,” he said of getting out front and setting the pace.

Rahmer hit the rear of the field with nine away but then saw his pace slowed, and his 1.7 second lead erased on the 12th lap when the only caution flag of the race unfurled for a stopped Troy Fraker.

Rahmer jetted away on the restart as Danny Dietrich raced with Trout for second.

With five laps to go Rahmer had a 3.8 second lead that dropped off a bit, to 3.578 seconds at the finish.

Dietrich finally got by Trout on the 24th circuit.

Heats went to Westhafer and Trout.

Eckert started on the pole and led every lap of the 30-lap special for super late models to earn $3,000 for the win that was the eighth of his career at Williams Grove.

His pace was slowed by four caution periods but each time with Dan Stone and Coleby Frye lining up just behind, Eckert was up to the challenge and pulled away from the field.

Stone and Frye exchanged second spot more than once before Stone finally kept the spot to the finish.

Eckert’s margin of victory was 5.396 seconds.

Frye was third followed by Jerry Bard and Jim Bernheisel.

Haus earned the hard charger award after starting 16th in the field.