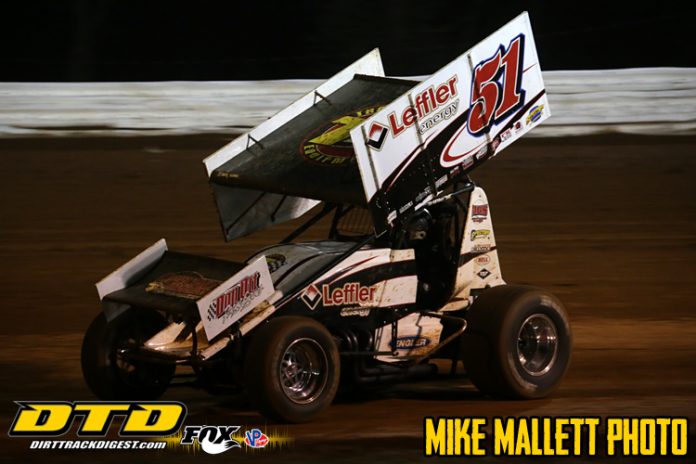 MECHANICSBURG, PA – Freddie Rahmer of Salfordville made it back to back wins in 410 sprint competition at Williams Grove Speedway on Friday night, taking $4,080 for his third oval win of the season.

Rahmer had to recover from a wheelie on a lap 10 restart that cost him two spots in order to get the 25-lap victory.

Oklahoma’s Brady Bacon took the 100-lap USAC Silver Crown main after what was a late-race bout of drama that saw one leader taken out of the event by his challenger from behind.


Enola’s Kody Lehman started on the pole of the 410 sprint car main and held sway over Rodney Westhafer when action began.

Fourth starter Anthony Macri moved into second on the fifth lap and began making his bid(s) for the win.

Macri was quickly followed by Rahmer on his way to the front.

Lehman was doing his best to keep control of the race with 10 laps completed despite Macri’s repeated attempts at snaring the lead when the first caution flag of the race unfurled.

Macri was continually working the outside on Lehman to get the lead and in fact, just moments before the yellow, he had taken the point in the race only to see the move negated by the yellow.

Rahmer seemed poised to pounce on the restart but instead lifted the front end high up off of the ground as the car crossed the stripe and instead of moving forward, he fell backward two spots as he tried to muscle the car back under his control while slipping from side to side.

Meanwhile, Macri was again working Lehman for control as Lucas Wolfe worked from the third spot after getting by Rahmer during his wheel-stand.

A second caution flag appeared with five laps to go and again Macri saw a move for the lead called back after this time having gotten around Lehman in the first and second turns while Wolfe slipped by on the bottom.

Macri then slowed to a stop on the track while under caution.

Rahmer drove through the middle of the track on the restart in the first and second turns to motor by Wolfe and then quickly used the same lane in turns three and four to move from third to the lead in one lap before driving off for the victory.

Lehman then fought to hold on to second, which he lost to Wolfe with three laps to go.

Lehman would finish a career-best third followed by Brian Montieth and Danny Dietrich.

Rahmer talked about his wheelie, “I wheelied like terrible.  That was ugly,” he said.

“I didn’t have any drive in it ‘til about five laps after that.”

The 100-lap USAC Silver Crown main saw seven caution flags slow the race pace with Illinois driver Chris Windom taking the early lead from the outside of the front row.

Windom was chased by polesitter Justin Grant of California for the first 37 laps before Pennsylvania USAC’er Steve Buckwalter of Royersford motored into second after running a slow and steady pace to the front from the eighth starting spot.

Buckwalter followed Windom until a lap 47 restart when he was able to bolt underneath for control.

Buckwalter was able to pull away from Windom during the ensuing laps as USAC point leader Kody Swanson came to second on lap 82 with the leader over two seconds ahead.

After a restart with 11 laps to go, Swanson made a bid for the win only to come up short while also jumbling the field in the second turn that saw Brady Bacon zip through the cluster for the second spot while Windom got by Swanson for third.

Windom then jumped past Bacon to reassume second and apply pressure to the leader but Buckwalter had the race in hand with four laps to go.

However Windom proved rather ungraceful in his bid to steal the win with under a lap to go as he attempted to drive through the leader in the first turn.

The result saw Buckwalter spin out, forcing a green-white-checker run to the finish in which Windom ended up popping a tire just after taking the white flag.

This allowed Bacon to blast by and take his first-ever career USAC Silver Crown victory, worth $8,000.

It would have also been Buckwalter’s first career USAC Silver Crown win.

Kody Swanson ended up second, .612 seconds behind while third went to Justin Grant.

Grant set fast time over the field with a lap of 21.799 seconds.