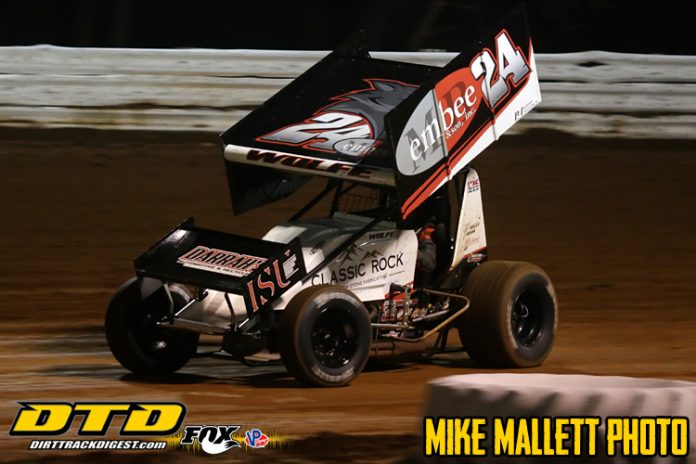 MECHANICSBURG, PA – Lucas Wolfe led from start to finish in the 25-lap sprint car main at Williams Grove Speedway on Friday night but he actually won the race on the opening lap of his heat race earlier in the night.

It was a run up the middle going into the first turn on the initial start of his heat that produced a three-wide move that netted Wolfe the lead in the qualifier and that set him on the pole for the feature thanks to a heads-up format.

And even Wolfe knew the move was key to his victory, his second of the season at the track.

“It was a very critical part of the night in the heat race,” he said.

Mechanicsburg’s Wolfe used the pole to earn the feature victory in the 410 sprint main, chased by Rick Lafferty for the first eight laps before Danny Dietrich got the spot in the midst of a battle with Freddie Rahmer.

Rahmer and Dietrich swapped the spot a few times on lap 10 before Rahmer took the spot for good as the race entered the rear of the field with 10 laps to go.

A restart with nine laps to go put Rahmer on Wolfe’s tail and Rahmer kept pace with Wolfe, biting into his lead while using the low side in turns three and four but eventually Wolfe was able to inch away to get outside of striking distance to the finish.

Traffic again entered the picture on the final lap but Wolfe took the victory by .504 seconds ahead of Rahmer.

Dietrich fought off a challenge from Brian Montieth during the closing laps to record third while Montieth and Mark Smith completed the top five finishers.

The win was the 21st of Wolfe’s career at the track.

Buckwalter and Shultz had the front row for the start of the URC sprint main and Buckwalter got the drop when the green flag appeared.

Shultz assumed second and hounded Buckwalter all during the first eight laps before a red flag appeared for a turned over Derek Locke in the fourth corner.

Mark Smith lined up third for the restart but failed to challenge instead it was back to Shultz and Buckwalter battling for the win with Shultz sticking to the top lane while Buckwalter worked the inside.

And Shultz finally got far enough around in turns three and four with seven laps to go in order to be scored the leader.

Once in front, Shultz pulled away to a 2.095 second lead to pick up his first career 360 sprint car win at Williams Grove.

Smith lost power on the final lap of the feature as the checkered flag unfurled.