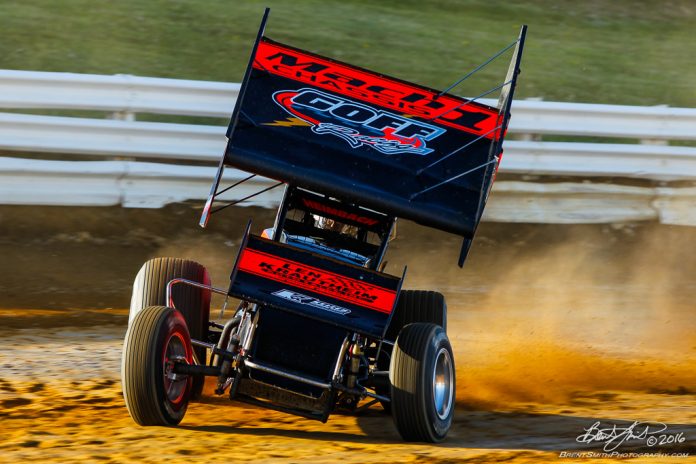 SELINSGROVE, PA – Blane Heimbach drove across town for a rare appearance at his home track and picked up the 19th Annual Mach 1 Chassis National Open for 360 sprint cars after a thrilling duel with Mark Smith of Sunbury.

The $5,000 win in the 30-lap championship event was Heimbach’s fourth career in the race at the wheel of the Creasy Signs/Goff Racing No. 12.

Jim Bernheisel of Lebanon returned to Victory Lane when he wired the field for his fifth career win in the 25-lap super late model race. Bernheisel became the division’s ninth different winner this season.

Shaun Lawton of Bloomsburg made it five feature wins in a row in the 15-lap pro stock race.

Selinsgrove Speedway will be back in action at 7:30 p.m. Saturday, July 27, with an open wheel doubleheader featuring the 360 sprint cars, PASS/IMCA 305 sprint cars plus limited late models and roadrunners. Gates will open at 5 p.m.

The speedway will not be racing Saturday, July 17, for summer break.

Carberry dogged Heimbach until lap three when Smith moved to second.  One of the early race favorites, Chad Layton’s engine started to show heavy smoke and he retired to the pits early.

As Heimbach negotiated the heavy traffic, Smith drew to his tail.  Smith used a lapped car to shoot by Heimbach for the lead on lap 11 but Heimbach came right back.

By the middle part of the race Kyle Reinhardt started his charge from the back, taking over fifth place and continued to move forward.

Smith started to open a lead as Heimbach again drove through traffic but as laps wound down, Heimbach was back on Smith’s nerf bar.  Heimbach retook the lead on lap 26 and started to pull away.

A spin by third running Derek Locke on lap 29 brought out the caution flag and gave Smith one last shot in a battle of former track champions.

Reinhardt tried to slingshot by Smith on the restart but Smith held him off.  This allowed Heimbach to pull away and win by just .7 seconds over Smith, Locke, Reinhardt and Carberry.

Sprint car heats were won by Keller, Smith and Heimbach.

The two veterans Bernheisel and Schick with scores of wins between them started to pull away from the rest of the field.

By the midway point Bernheisel was running with a comfortable lead as Brouse started to close on Schick.

Bernheisel led the rest of the distance winning by 3.11 seconds over Schick, Brouse, Kenny Trevitz and Snyder.

Five cars made an early bid for the pro stock lead with Corey Long just nosing ahead of Brandon Moser, Tommy Dawson, Kyle Bachman and Shaun Lawton.  Moser took the lead in the first turn but a melee collected Dawson bringing out the caution.

On the restart, Lawton got by Bachman for second.  Lori Croop found the second turn wall on lap four, requiring a wrecker.

Moser and Lawton battled side by side for the lead.  Moser up top and Lawton on the low side.  The battle for the lead put Bachman right on Lawton’s tail in third when the yellow flag came out again on lap nine.

Lawton again used the restart to duck low and go side by side and was able to get by on lap 10.  Once in the lead Lawton started to open some daylight while Bachman pressured Moser.

Lawton led the rest of the way, winning his fifth consecutive race by 1.276 seconds over Moser, Bachman, AJ Stroup and Long. 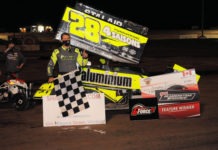