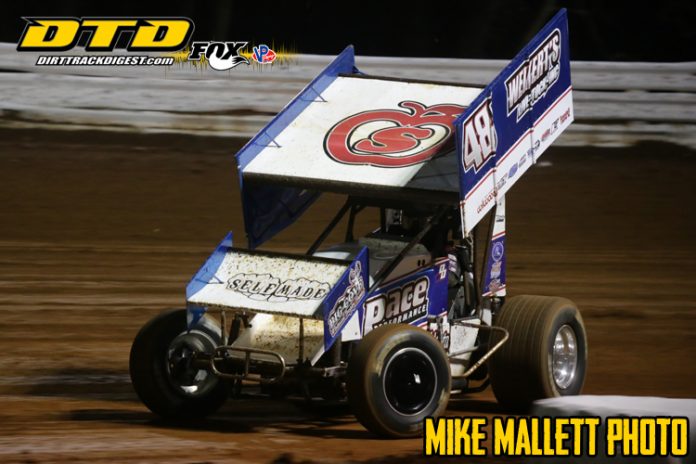 MECHANICSBURG, PA – Danny Dietrich of Gettysburg struck for the third Mitch Smith Memorial victory of his career at Williams Grove Speedway on Friday night, walking away with $8,080.80 for what was his fourth sprint car win of the season at the track in a World of Outlaws tune up race.

Dietrich took the win ahead of a furious battle for positions in the top five that took place between Freddie Rahmer, Anthony Macri, Chad Trout, Brian Montieth and eventually, Lance Dewease.

The 20-lap 358 sprint main went to Kevin Nouse for his second oval win of the year but only after a marathaon event.

Polesitter Chad Trout tried to get the drop on Dietrich when action began in the 30-lap, 31st annual Mitch Smith Memorial but as quick as Trout took off at the drop of the green, Dietrich blasted to his outside in the first corner to drag race the speedster down the backchute.

The drag race then ended in the blink of an eye as the pair raced into the third and fourth corners with Dietrich taking the lead using the cushion.


Dietrich’s pace was slowed for spins on laps four and six and both times Trout tested the inside on Dietrich but to no avail.

As the leader hit the rear of the field on the 12th tour, Montieth and Rahmer began battling for the third spot with Rahmer eventually besting the match to also get around Trout for second with 16 laps to go.

Dietrich saw a 4.263 second lead erased with 13 laps to go when Kyle Moody backed into the outside first turn rail.

The restart saw Rahmer, Trout and Macri battle for second with Macri finally getting third from Trout with five laps to go while gaining on Rahmer.

Meanwhile, 18th starter Lance Dewease moved into fifth and was up to fourth by the time a final caution flag unfurled with just two laps left.

The return to action saw Rahmer attempt an outside move in the first turn but the bottom was just too quick with Dietrich pulling out to a .732 second lead at the finish.

“We’re very happy to be standing here on the frontstretch honoring such a great man,” Dietrich said of taking the prestigious checkered flag.

“Little Freddie fires in there and he’s doin’ everything he can to win, I’m doin everything I can to slow down to set the car into one so I can beat him off the second turn,” Dietrich said of the final restart when Rahmer tried to steal the win.

Heats went to Dietrich, Trout and Stutts with Trout winning the dash.

Dietrich set fast time over the field with a lap of 17.004 seconds.

The 358 sprint feature was plagued by eight yellow flag periods including one that turned red for refueling with three laps to go.

Veteran Rich Eichelberger led the first lap before Tyler Breahm scooted him off the inside line in the first turn to take control.

The restarts worked to Kevin Nouse’s advantage as the defending track champion began the race from the 10th starting spot while current point leader Doug Hammaker started out in 13th.

At the halfway point, Nouse was up to fourth behind Breahm Eichelberger and Dylan Norris.

Nouse used the outside lip in the third and fourth turns to make his big moves during the second half of the race, using it to get by all the lead cars until he was the one out front, with five laps to go.

Hammker took worked his way front and got by Breahm for second on the final restart to finish bridesmaid.

Breahm settled for third followed by Glenndon Forsythe and Norris.

Heats went to Eichelberger and Breahm.