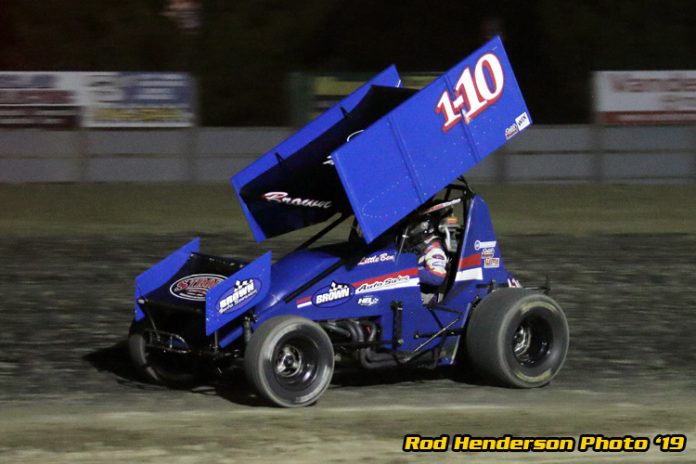 BRIGHTON, ONT – The Southern Ontario Sprints invaded Brighton Speedway for Round 4 of the 2019 tour Saturday night.

The 17 sprint car and 89 stock cars in attendance raced before a crowd of eager fans at the one-third mile oval on Rapid Rad, Classic 107.9 and John West Construction night.

Brantford, Ontario native Jake Brown led the field of Southern Ontario Sprints to green in his No. 1-10 machine and he never relinquished the point during the 25-lap feature. After multiple cautions were given within the first three laps Brown put the hammer down and all his competitors saw was dust in his wake. Cory Turner battled hard trying to secure his third straight win at Brighton this season but there was no catching Brown and the No. 13 would have to settle for second. No. 10 Mitch Brown would work his way up from his fifth starting position to score a hard earned third place finish. Fourth place finisher and points leader No. 91 Ryan Turner took little time navigating his way up from his 8th starting position where he waged a wild war against Mitch Brown. Aaron Turkey charged hard in his No. 68 from 11th to a fifth place finish.

“It was a fun race,” Brown said thanking Brighton for welcoming the sprints following the race. “It was a great track, really slicked up with a nice top.”


In a thrilling dash for cash No. 22 Shawn Sliter drove hard against five fellow sprints for as many laps to take home a prize purse.

No. 55 Bradley Rayner was on rails Saturday night. The Codrington driver took off at the drop of the green flag in the 30-lap Vanderlaan Building Products Late Model feature and quickly worked his way into the lead from his fourth starting position. Rayner was hooked up as he stomped on the gas determined to secure his fourth win of the season. No. 09 Robbie Wilson and No. 77 Caley Weese gave Rayner an exhilarating chase as No. 57 Charlie Sandercock No. 5 Steve Baldwin muscled their way into the top five the back of the pack. By the time Sandercock slid into second Rayner was so far gone that the 57 was sure he was the lead car. The pair had a good chuckle about it in victory lane before Rayner waved his fourth checkered flag of the season. Sandercock earned second, Wilson took a well earned third, Weese fourth and Baldwin fifth.

As soon as the green flag flew, so did No. 07 Curtis King. He stomped on the gas and scooped up the lead on the first lap of the 30-lap Canadian Modified ABC Taxi Triple Crown Race 3. A big wreck on lap three quickly slowed the pace but it didn’t stop King from leading the majority of the race uncontested. No. 87 Andrew Hennessy would prove to be King’s biggest contender of the night as he maneuvered his way up from his 10th starting position to settle in behind runner up No. 32 Doug O’Blenis. Hennessy used a lap car to sling shot into second. With seven laps to go, another caution reset the field pitting the 07 and 87 against one another on the restart. The pair exchanged the lead for one lap but with the taste of victory already within his grasp, King bit down on the inside and soared to his first season win. Hennessy took second, O’Blenis third, No. 14 Brandt Graham fourth and No. 12 Adam Whaley fifth.

From his pole position, No. 48 Adam Wells led the pack of 24 Brighton Automotive Thunder Stocks to green. He led for more than half of the 20-lap main event that saw the division treat race fans to three-wide racing as its finest. No. 2 Leslie Turcotte-Mowat, No. 74 Mike Lucas and No. 92 Adam Turner ran hard in Purchase’s rear-view as No. 03 Justin Ramsay and No. 72 Doug Anderson used the cushion to try to leap to the advantage. In a sick move, Purchase drove his 53 up the middle into second. A caution slowed the field and try as he might, Wells couldn’t keep the pace with Purchase. The 2018 champ took off and captured his first win of the season with Wells scoring a hard fought second. Ramsay placed third, Turner fourth and Anderson fifth.

No. 25 Lawrence Evenden and No. 52 Doug Galt led the field of Bill John’s Comp 4 to green in the 15-lap feature. Galt looked like he was well on his way to securing his second win of the season, but on the sixth time by No. 11 Adam Flieler snatched up the lead and never looked back. Flieler went on to secure his second season win with Galt taking home second. No. 44 Tommy Bailey took third, No 13 Joel Dempster fourth and No. 43 Devon Kipped fifth.

In an emotional and loving tribute No. 25 Lawerence Evenden dedicated his first min-stock career win to his dearly departed sister.

No. 37 Terry Blight secured his first career win in the Quinte Septic Junior Stinger 12-lap feature while No. 1 Kyle Gregory picked up his second Quinte Septic Senior win of 2019.

Coming next Saturday, August 3rd CANEX presents the Salute to our Forces Night at the track. There are free tickets available for the Canadian Armed Forces community from the CANEX building located on RCAF Road in Quinte West. Present your ID when you grab up your tickets and enjoy the Vanderlaan Building Products Ltd., Bainer’s OilGARD Anti Rust Canadian Modifieds, Brighton Automotive Thunder Stocks, Bill’s Johns Comp 4/Mini Stocks and Gord’s Water Vantastics. Front Gates open at 5:30 PM, Hot Laps begin at 6:00 PM and the green flag drops at 7:00 PM. Grandstand Admission is $12.00 for Adults, $10.00 for Youths & Seniors, $3.00 for Children 7 to 12 and a Family Pass is $28.00.

IMG 9050 Keeping the fans on the edge of their seats at Brighton Speedway Brantford, Ontario native Jake Brown led the field of Southern Ontario Sprints to green in his No. 1-10 machine and he never relinquished the point during the 25-lap feature.