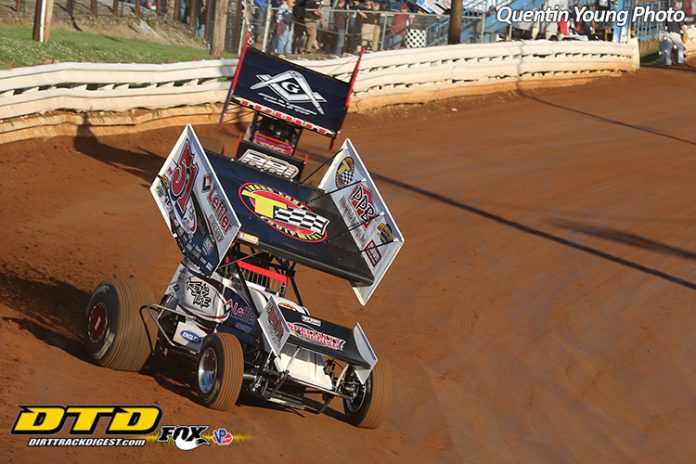 MECHANICSBURG, PA – Freddie Rahmer of Salfordville won the Billy Kimmel Memorial for 410 sprint cars at Williams Grove Speedway on Friday night, taking $3,800 for his fourth oval win of the season.

Alan Krimes and Chad Trout won the heat races and shared the front row for the 25-lap main event.

Trout grabbed the lead at the drop of the green but Krimes shot by him off of turn two, taking over the top spot.

Freddie Rahmer then moved into second and Cory Haas into third.

The yellow flag flew with four laps completed for track point leader Danny Dietrich as his car was sitting the wrong direction against the third turn fence with a flat left rear tire and other damage.


Dietrich was towed to the pits and he was done for the night.

Rahmer ducked inside of Krimes in turn one on the restart but Krimes’momentum off of the cushion kept him out front and then Cory Haas challenged Rahmer for second in the third corner but to no avail.

Krimes again controlled the restart and pulled away from Rahmer, Haas and Kyle Moody as they blasted around the cushion.

In traffic, Krimes had to duck off of the cushion to miss the slower car of Barry Shearer entering turn three and Rahmer was then able to close at the halfway point.

Krimes then again had to go low to lap a car in turns three and four as did Rahmer while still keeping pace with the leader with eight laps to go.

Rahmer tried the low side in turns three and four on lap 18 and apparently liked what he found in the low groove because at the other end of the track on lap 19 he ducked low on Krimes entering turn one and slid in front of him to take the lead.

Once in front, Rahmer quickly pulled away to a comfortable advantage and was firmly in control when a two-car tangle on the frontstretch between Anthony Macri and Robbie Kendall as they raced for position inside the top 10 brought out the red flag.

Due to the severity of the accident, the race was called official with 23 laps complete and Rahmer was declared the winner over Krimes, Cory Haas, Brian Montieth and Kyle Moody.

The 25-lap 358 sprint feature was postponed and will be rescheduled for a later date.