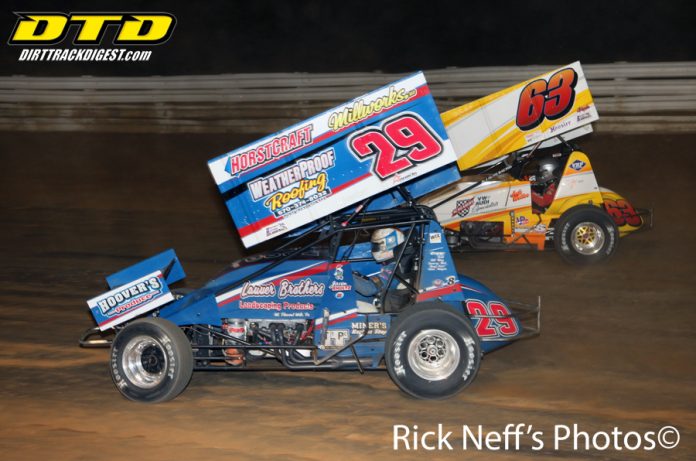 SELINGROVE, PA – Selinsgrove Speedway will present the final points races of the 2019 season at 7:30 p.m. this Saturday, Aug. 24, as part of Foss Jewelers Championship Night.

Track titles for the Keller’s Auto Body & Towing 360 sprint cars, Jeff’s Auto Body & Recycling Center super late models, A&A Auto Stores pro stocks and roadrunners will be decided on the track with two of the four titles coming down to the wire!

Representatives from the Ronald McDonald House will also be on hand and race car drivers are tentatively scheduled to participate in a helmet collection to benefit the Danville facility that provides a home away from home for families with ill children.

The closest points chase coming into this Saturday’s showdown is in the super late model division with just 40 points between two-time winner Coleby Frye of Dover and one-time winner and defending champion Bryan Bernheisel of Lebanon.

This Saturday will also be a Grit House Route 35 Challenge Series race for the super late models paying $2,500 to win. After three events (two at Port Royal and one at Selinsgrove), Dylan Yoder of Selinsgrove has a slim six-point lead over Bernheisel in the challenge series standings.


In the 360 sprint car division, four-time winner Kyle Reinhardt of Neptune City, N.J., is seeking his first career title with only 90 points separating him from three-time winner and former two-time champion Jason Shultz of Carlisle.

Shaun Lawton of Bloomsburg will take the green flag Saturday in hopes of clinching his first career title in the pro stock division with a 170-point advantage over six-time winner Brandon Moser of Middleburg.

21-year-old driver Jake Jones of Hunlock Creek, with four wins this season, holds a convincing 335-point lead over two-time winner and former one-time champion Will Brunson of Middleburg in the roadrunner division.

During Saturday’s intermission, Jim Bernheisel of Bernheisel Race Cars in Jonestown will be giving several fans rides around the half-mile oval in the specially-designed two-seater late model.

Race sponsor Foss Jewelers, located on Route 522 in Selinsgrove, has been providing customers with affordable, high-quality jewelry backed by unsurpassed service since 1949. For more than 20 years Dan Foss has sponsored the gold championship rings for the divisional track champions at Selinsgrove Speedway.

The championship rings will be presented at the annual awards banquet Saturday, Nov. 9, at the Genetti Hotel in Williamsport.

For a complete speedway event schedule, the latest news, results, and race status, visit selinsgrovespeedway.com or follow us Twitter and Facebook. The track office can be reached at 570.374.2266.