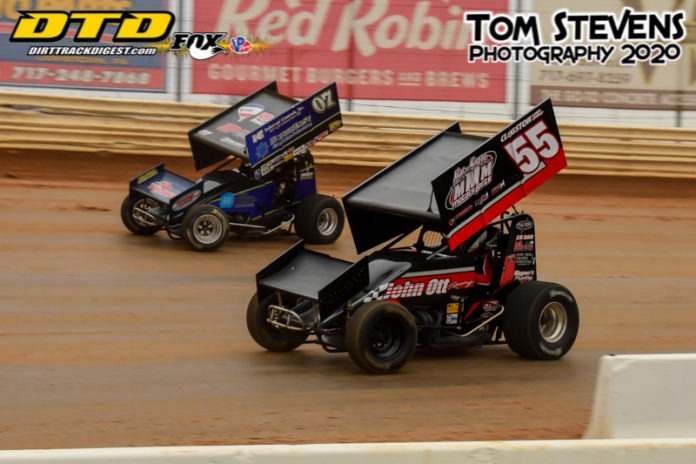 PORT ROYAL, PA –  Mike Wagner capped off a return to racing for the Port Royal Speedway by picking up his first Weikert’s Livestock 410 Sprint Car win at the Speedway since 2014, leading all 25 laps enroot to a $5000 payday courtesy of Packer Concessions LLC.

While the race fans have waited 91 days as a result of COVID-19 for racecars to grace ‘The Speed Palace’ clay, Wagner had been waiting nearly six years to find his way back to victory lane in what the Harrisonville, Pa driver described as one of the longest droughts of his career.

“Man we needed that. This is probably the longest I’ve went without winning in quite a while,” said Wagner in front of friends, family and crew. “I got a new sponsor this year in Mc Mcgee and he believes in me and put money into the car. I needed to win for him and all of these guys who work on the car and this is just really cool.”

Wagner drew the pole for the feature and got the early jump at the green flag, pulling away from New York native Paulie Colagiovanni and Speedway regular TJ Stutts.


As he set the early pace on the outside of the track, his son and defending Speedway track champion Logan Wagner, was making it known that he’d be a contender as he pulled a slide job entering turn three to move from sixth to fourth on lap two.

With Wagner holding a nearly two second lead by lap six, all eyes were on the next three cars as they battled under a blanket for the runner up position. Logan seized his opportunity on lap nine as he slid both Colagiovanni and Stutts entering turn three to take second.

However, the father and son podium hopes would be dashed as Logan Wagner blew a right rear tire in turn 1 two circuits later, sending him to the pits and bunching up the cars again. He would rejoin the field after replacing the tire under caution.

On the restart, Stutts showed his muscle as he slid under Colagiovanni entering turn 1 and pulled alongside of Wagner for the lead, only for Wagner to pull back ahead down the backstretch. Stutts tried the move again in turns three and four two laps later, but Wagner once again showed he wasn’t going to be denied as he pulled away to lead.

Fifth-place starter Jeff Halligan, a rookie in the Sprint Car division this season, had moved into third on lap 11 and he passed Stutts coming to the white flag to take the runner up spot. However it was too late as Wagner crossed the finish line with a 2.060 second advantage for his 12th career victory at the Speedway.

“It sure feels good. I’d just like to do it for these guys,” said Wagner, in what was a popular win for fans. “Starting up front, we were just going stay there until we had to move and hopefully we can do it more this year.”

For Halligan, it was a career best finish at the Speedway for the young gun who in recent seasons made his name in the 358 Sprint Car division. He believed he had a car capable of winning, but knew that track position was going to be important.

“I really felt like if we would’ve had a better start or even five more laps we might have had something for them,” said Halligan. “This means a lot to us and we’re getting around here pretty good so hopefully next time we can be sitting on that stage one spot better.”

“I honestly couldn’t tell you the last time we won here, but it feels like it’s been a while,” said Satterlee. “You have got to be good here to win, so it says we are doing something right and I’m pretty proud of this one.”

Scott Flickinger and Marvin Winters led the field to green with Flickinger jumping out to early lead. Satterlee, who started fourth, had moved into second by the completion of lap one and he slid under Flickinger entering turn 1 and exited turn 2 with the lead before the caution flew for a slowing Kyle Lee, negating the pass.

On the restart though, Satterlee would not be denied as he pulled under Flickinger exiting turn 2 and powered down the backstretch to lead lap two. Feathers, who started fifth moved into the third position on lap three and seventh starting Eckert followed to fourth.

One lap later Eckert slid under Feathers to take third and by lap five he slid into the runner up position, bringing Feathers along for the ride.

Meanwhile, Satterlee was out to a half straightaway lead. He approached lapped traffic on lap 13 and was having issues getting by the lap cars, allowing Eckert and Feathers to close the gap in half.

Knowing he couldn’t afford to be patient much longer, Satterlee got creative in passing the lap cars, moving all over the track in search of room. With five laps to go he held a 1.697 second lead over Eckert and it would never get closer.

“We haven’t gotten to race much here lately, so I feel like we haven’t been all that good really,” said Satterlee. “I was kind of just riding behind those lap cars and I knew Rick was coming and I needed to start moving. If I was going to lose, it wasn’t going to be sitting behind lap cars waiting for sure.”

For Eckert, he knew track position would be key and that with limited cautions he’d need some help to get the win.

“We were really good all night but the re-draw just didn’t work out for us in terms of starting spot.” said Eckert. “I think Gregg was just as good as us and maybe even better, so I can’t really complain. We’ll take a podium finish and move onto the next one.”

Andrew Yoder picked right off where he left off 2019 as he picked up the win in Selinsgrove Ford Limited Late Model action in commanding fashion over Dillan Stake and Ryan Zook.

The win was his eighth career in the division and continues a dominance of the division that saw him pick up the track championship last season.

“I just love this place so much and I can’t really explain things other than we have a really great set-up and car,” said Yoder. “Sometimes it’s almost unbelievable how great this car is and I’m excited to keep going this year.”

Devin Frey and Shawn Shoemaker led the 21-car field to the green flag with Frey taking the early lead over third place starter Stake. Meanwhile Yoder, who started sixth moved into third at the completion of lap one.

Still using the high side, Yoder next overtook Stake and then Frey to take the lead exiting turn four to lead lap two. By lap four, Stake was back into the second spot and Zook had advanced from his ninth starting spot to take third.

Stake tried to pull a slide job on Yoder on lap three, however he couldn’t make it stick and settled back into second. The first of two cautions came out on lap four as Chase Bowsman got turned around in turn three.

On the restart Yoder once again powered off into the lead and by lap 12 when he reached lap traffic, he held a nearly full straightaway lead on Stake. The final caution came out one lap later as Brad McGinnis came to a stop on the front stretch.

On what would be the final restart of the night, Yoder once again took off and Stake and Zook would be left to battle it out for second. Yoder took the checkered flag by 3.996 second over Stake, Zook, Devin Hart and Todd Snook.

“We could run all over the track which is great after two features already ran and speaks loudly of the surface here,” said Yoder. “Whether it was on the top or the bottom, there wasn’t anywhere where I felt like I couldn’t go.”

For Stake, he thought his best shot was the slide job early in the race and felt once Yoder found the bottom of the track he was racing for runner up.

“I had one shot at him with the slider attempt and I just couldn’t stick it and he was gone after that,” said Stake. “He kind of snookered us all going to the top on te intial start and I thought we might be able tyo get back by him on the bottom, but he moved won on us on that restart and it was over. He’s the reason we’re trying to get better and I guess we’re not there yet.”