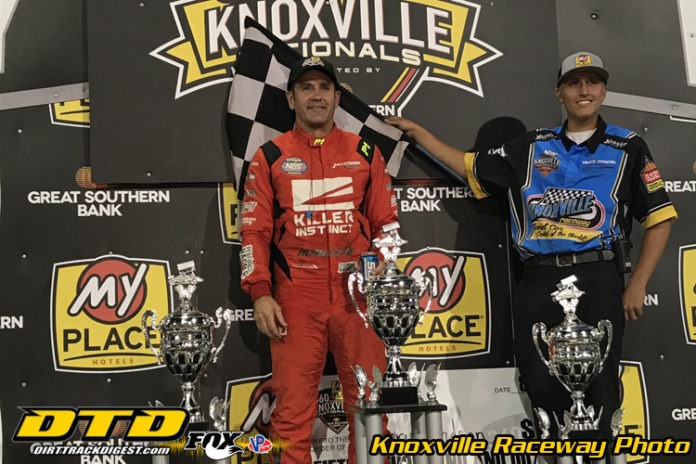 Things got off to a rough start in the 25-lap main event for Matt Juhl, who flipped violently after contact with Calvin Landis in turn three. He was o.k.

Madsen led Golobic, Saldana, Shaffer and Brown back to green. Brown shot from fifth to third quickly. Zearfoss was on the move as well, passing a pair of McCarl’s, Carson and Austin to go from eighth to sixth. He took fifth from Shaffer on lap 11.

Madsen entered lapped traffic on lap 13. Zearfoss picked off Saldana for fourth on lap 14. Cory Eliason was also on a charge from row eight. He entered the top five on lap 16.

Brown reeled in Golobic and got by him for second on lap 19. Madsen’s lead was over four seconds heading to the late stages. Bad luck would strike Brown on the last lap, as he went up in smoke and ducked into the infield.

In the end, Madsen had everyone ferhoodled! Golobic regained second 4.7 seconds behind Madsen. He was followed by the hard-charger Eliason, Zearfoss and Austin McCarl. Saldana, Shaffer, Aaron Reutzel, Dominic Scelzi and Carson McCarl rounded out the top ten.

Carson McCarl earned $1,000 from the Knoxville 360 Booster Club by being the highest finishing Knoxville 360 regular. Zearfoss earned $200 from Jetco as Rookie of the Year. Jeffrey earned $360 from DGRD for the best appearing car.

Lance Norick opened the night with a win in the E main, Jamie Ball took the D main, Harli White claimed the C main and Juhl snagged the B. Garret Williamson flipped hard after the conclusion of the C main. Kyle Offill flipped in turn one during the B. Both walked away.

“Cody Jacobs got me a fantastic racecar there,” said Madsen in Victory Lane. “It was pretty smooth. I made a couple of minor mistakes, but it seemed like everywhere I went, it would respond. It was fun to drive. We’ve been knocking on the door so much this year…it was just great to give this to (the team). We had a different car for next week, but I might tell them to bring that one back. It was good.”

“(Kerry) was awfully fast,” said Golobic of his ride aboard the Elk Grove Ford #17wx. “He just got out and left us. I thought maybe on the restart, I may be able to shoot the bottom. I kind of hung with him for a lap, but once we got rolling, he was on another level. He’s one of the best at this place, and has a lot of laps. For us to compete and have a good battle with Brian Brown before he blew up…I’m proud of this team. We’ve had some struggles at this place in the past, but we’ve tried to get back here as much as we could and it’s begun to pay off. I just have a whole different comfort level and our car is really fast.”

“We just needed a yellow or two,” said Eliason of his drive in the Rudeen #26. “That would have gave us a chance to dice it up with the leaders. I could see Shane and Kerry out in front. It was kind of fortunate that we were able to get to the podium, but we learned something for next weekend. We definitely picked up the pace in the last two weeks.”

The companion 15-lap Pro Sprints feature saw veteran Jeff Wilke lead early from his pole position ahead of Chris Walraven and Devin Kline. A spin by Scotty Johnson a lap in, set up a restart that saw a four-wide battle for the lead.

Wilke still emerged with the advantage, but Devin Wignall was streaking on the high side and took the point on lap three. Matthew Stelzer, who started twelfth saw the advantage of the cushion as well, and used it to jet from sixth to fourth on lap five.

Wignall entered lapped traffic, just before contact between Mike Mayberry and Evan Epperson sent the latter into a spin towards the infield. Mayberry also had a right rear tire to replace. Wignall shot out to the lead again, while Walraven worked the low side to gain second from Wilke with six to go. On lap 11, Kline battled back by Stelzer for fourth, and then claimed the third spot from Wilke with three to go.

Wignall began to lose his power plant with a few laps to go, but he never let off the gas and just held on for his first career win here. Walraven was second, ahead of Kline, Wilke and Stelzer. Matthew Johnson, Chase Young, Brandon Worthington, Joel Thorpe and Matt Allen completed the top ten. Wignall and Young were heat winners.

“That motor’s definitely done for sure,” said Wignall in Victory Lane. “I can’t thank my team enough for putting me in this position. I just never thought this moment would come. With about four to go, I pegged the temperature gauge, but I wasn’t going to let up any!”

The “One and Only” commences August 13-15. Saturday marks the $50,000 to win Capitani Classic. For tickets and other information, visit www.WorldofOutlaws.com. For more information on the Knoxville Raceway, visit www.KnoxvilleRaceway.com and follow on Facebook and Twitter.