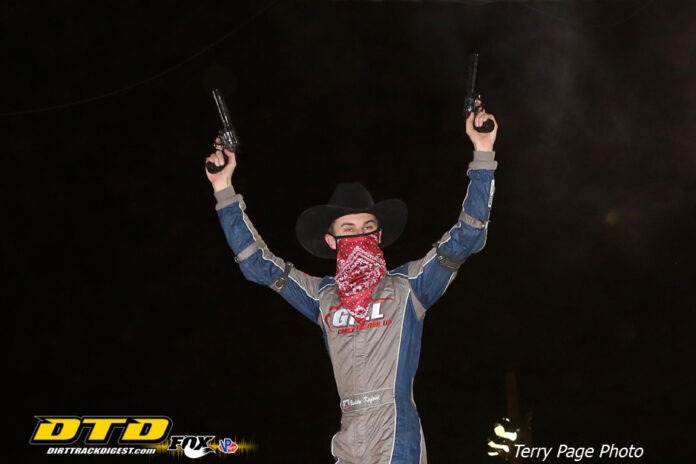 SAN TAN VALLEY, AZ – Friday night history was made at FK Rod Ends Arizona Speedway, as the curtain was raised on the long-awaited inaugural running of the Schaeffer’s Oil Wild Wing Shootout pres. By O’Reilly Auto Parts. In Sprint Car action it was all about California hot shoe, Buddy Kofoid who led wire to wire to score the feature event win, while North Dakota’s Casey Arneson was methodical in his charge from sixth to score the Modified win.

Leading the field to the C&B Bonding Green Flag, Kofoid would flex his muscle early as he grabbed the early lead over the new pilot of the Roth Motorsports entry, Aaron Reutzel.

Kofoid’s early lead would be short lived as the race went red on the second stanza for an overturned Sammy Swindell. While Swindell was unscathed, his night would come to an early end.

The ensuing green flag would see Reutzel take a big shot at Kofoid for the early lead, but the youngster was able to counter the advance and keep his entry out front as he soon began to distance himself from the field.

As Kofoid ripped the top, behind him Donny Schatz would take to the bottom groove of the speedway as he was able to move into the third position on the fourth lap.

Kofoid would continue to lead the way, though action behind him would pick up at the race’s halfway point as Schatz would use traffic overtake Reutzel for the second position on the 14th lap, as Carson Macedo followed suit which dropped Reutzel back to fourth.

Following a caution on the 23rd lap for debris, Kofoid was again able to power away from the field, but the final two positions on the podiums were up for grabs and turned into an intriguing battle between Schatz and Macedo.

The last trio of laps saw Macedo and Schatz slice and dice for the runner up position with Schatz narrowly nipping Macedo at the line for the spot.

Kofoid would pick up the win in convincing fashion with the aforementioned Schatz grabbing the second position as he was flanked by Macedo, Reutzel, and Pennsylvania standout, Lance Dewease rounding out the Top-Five.

A total of 26 Winged 410ci Sprint Cars checked in for the Schaeffer’s Oil Wild Wing Shootout pres. By O’Reilly Auto Parts, and the night was kicked off with Donny Schatz earning WKD Electric Fast Time honors.

The final event of the night would be an exciting 25-lap Modified feature event that saw Collen Winebarger and Riley Simmons lead the field to the C&B Bonding Green Flag.

Simmons would get the early jump and began to set a nice pace on the slicked off FK Rod Ends Arizona Speedway surface.

The early battle for second was hotly contested between DJ Shannon, Winebarger, and Bricen James, with Shannon ultimately getting the best of his two counterparts. While in second, Shannon who started the night off by earning IMCA CA Speedweek Fast Time Honors, would start to pressure for the lead on lap five, but Simmons was able to keep him at bay and keep his machine out front.

As laps clicked off at a torrid pace, Casey Arneson would come to life from his sixth starting position as he would work into the fourth position on the 14th lap, before moving into third on the 15th lap.

Continuing to get stronger as the laps clicked off, Arneson would move into second on the 17th lap and quickly closed in on Simmons.

Closing the gap on Simmons out of the fourth turn on the 18th lap, Arneson would make his race winning move as he snuck under Simmons in turns one and two on the 19th lap.

Out in front, Arneson would set sail as he was able to race his way to a very convincing win to open the Modified portion of the Schaeffer’s Oil Wild Wing Shootout pres. By O’Reilly Auto Parts.

Simmons would hang on to finish second and Shannon would round out the podium. James would finish fourth, Winebarger fifth, as Ethan Dotson, Zach Madrid, Tim Ward, Grey Ferrando, and Chaz Baca rounded out the Top-10.

A total of six heat races were ran with wins going to Madrid, Simmons, Arneson, Shannon, Winebarger, and James, while Casey Skyberg and Austin Kuehl each won ‘B’ Mains.

For anyone unable to attend, all three nights of racing can be viewed live at FloRacing.com.