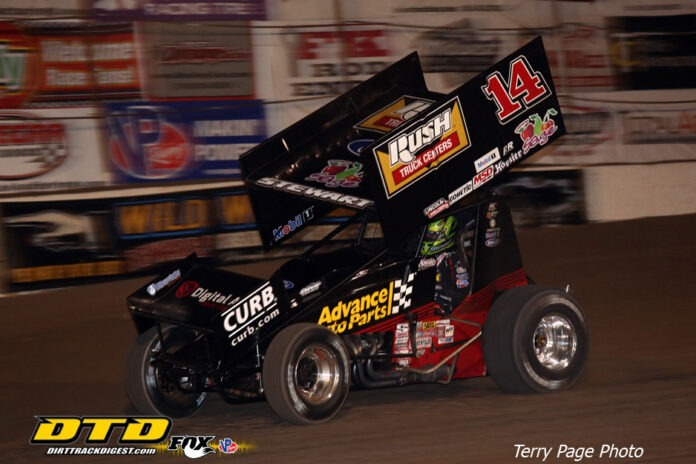 San Tan Valley, AZ- While Mother Nature tried to derail the finale of the Inaugural Schaeffer’s Oil Wild Wing Shootout pres. by O’Reilly Auto Parts, she would be unsuccessful as the show was ran in its entirety with Tony Stewart and Chaz Baca, Jr each emerging victorious.

For Stewart, the weekend came full circle. Leading the way during Thursday night’s Practice Session, the decorated veteran driver would not be denied on this night as he led the field to the C&D Bonding Green Flag.

Despite the initial start being waived off due to an incident in three and four, ‘Smoke’ would be hard on the throttle when the action resumed as he led the way early over DJ Netto, Dominic Scelzi, Rico Abreu, and Aaron Reutzel.

“Smoke” would work the high side of the speedway to perfection as he had his right rear just inches from the wall as he encountered traffic by just the eighth circuit.

While Stewart was dominant out front, Netto would hold down second and Scelzi third, as Rico Abreu would move into fourth on the 25th lap as Aaron Reutzel banged off the turn one and two wall.

With Buddy Kofoid slowing with nine to go, the field would bunch back up, but Stewart would prove to be too strong on this night. While he was able to pull away, Scelzi was able to get by Netto overtake the second position, while Reutzel was able to move back into fourth, and Carson Macedo began to inch his way toward the Top-Five after being involved in an altercation on the start.

Up front, Stewart would cruise to the popular win, while Scelzi hung on for second, Netto third, Abreu fourth, and Cory Eliason was able to make a late move to round out the Top-5.

The Modified finale saw Bricen James and Chaz Baca on the front row as they would lead the field to the C&D Bonding Green Flag. While the duo would race side by side for the opening lap, James would get the initial jump before a push in turns one and two allowed Baca to take over the race’s top spot.

While Baca took over the top spot, Tanner Black would jump into second on the fifth lap. While Baca continued to pull away, IMCA CA Speedweek Fast Qualified Brandon Schmitt would start to make some moves as he jumped up into the second position on the 11th lap before the race was halted on the 12th marker.

The restart saw Baca drive away from the field, but opening night winner, Casey Arneson made a nice move to slip into the 4th position as Black was able to return to second.

As Bacca pulled away to earn the big win during the final night of racing, Black would hang on to finish second with Schmitt finishing third, Arneson fourth, and Cody Laney rounding out the Top-Five.