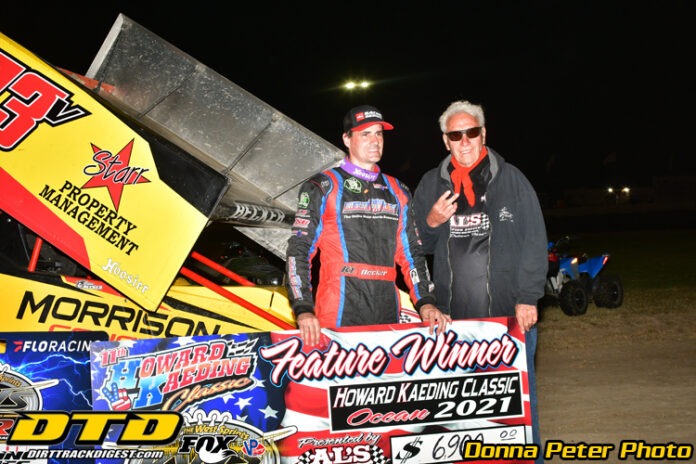 This premier headliner was loaded with mayhem that effectively reeled in and damaged half the 24-car field in one form or another during three red flag and five caution periods. Luckily nobody was injured.

Australian Jessie Attard set the tone on the initial green flag pursued by Becker, Shane Golobic and fast qualifier Tim Kaeding who were battling position. The action came to a halt just as things were getting interesting when the caution came out on the sixth circuit for a stopped car. When action resumed, Golobic got past Attard and paced the field for two laps before the yellow flag appeared once again for another stalled car. On the ensuing restart, things went bad when Golobic’s right rear gave way causing a massive pile up in the second turn. Among those involved were Willie Croft, Tim Kaeding, Justin Sanders, Dominic Scelzi, Kyle Hirst, and Ryan Bernal, and DJ Netto. Most teams scrambled to make makeshift repairs and returned to action. Unfortunately, Tim Kaeding would bring out the red again on the restart when he flipped hard into the front straightaway concrete. He was shaken but walked away under his own power.

It was Becker’s turn to lead and he didn’t waste the opportunity, jumping out to a healthy advantage as Attard, Sunnyvalley Dash winner Corey Day, and Mitchell Faccinto traded jabs behind him. Another caution appeared on lap 14 when JJ Ringo turned over in the first corner while Attard, Joey Ancona, Sanders and series point leader Bud Kaeding crashed in another turn two tangle. Those five cars were done for the night.

Becker once again shot out into the lead, now chased by ninth starter Tanner Carrick and Mitchell Faccinto. The frontrunners reached slower traffic on lap 21 and Becker’s advantage began to shrink as Carrick began to reel him in. However, Becker expertly negotiated his was through slower cars and held on for a three-car length victory. It was his 11th King of the West win for the 2005 champion.

“I’m so excited to finally win one for this team,” said a fired-up Sean Becker after jumping out of his car and climbing the front straightaway fence much to the delight of the capacity crowd. “We’ve worked really hard and I’m glad they didn’t give up on me.”

It was car owner Dave Vertullo’s first King of the West win since 2012.

Carrick was $3000 richer in second aboard his CVC Concrete Sprinter, with Faccinto filling up the rest of the podium in the Stan Greenberg Western Metal Company ride. Eighteenth starter Blake Carrick survived the mid-pack carnage to finish fourth and collect the $650 Swift Metal Finishing Hardcharger Award. Ryan Bernal rebounded from his earlier accident to score fifth in the NOS Energy sprint car.