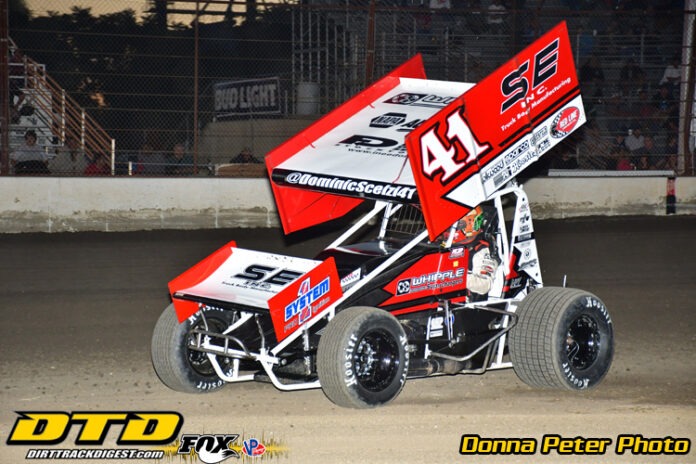 TULARE, CA – Dominic Scelzi continued his 2021 domination of Tulare Friday night at the Chris and Brian Faria Memorial with his second consecutive NARC-King of the West Fujitsu Sprint Car victory at the Thunderbowl, and he capped it off with a Kings of Thunder 360 win, making it six straight Tulare triumphs overall.

The win didn’t come easy, though. Scelzi lined up sixth on the grid for the start of the 30-lap Fujitsu Feature. Prior to tonight, the farthest back a driver had come to win in 2021 was fifth. The pilot of the Scelzi Enterprises/Red Rose Transportation 41 also had to endure a race-long battle with a pair of the west coast’s best, DJ Netto and Shane Golobic.

“I’m beat,” an exhausted Scelzi said. “I ran thirty laps as hard as I possibly could. The way the cushion was I was really hustling my butt off. I haven’t fallen out of the seat in a long time, but I did tonight. DJ is so good around this place. Shane’s won just about everything there is to win here.”

The win also held some extra significance for not just Scelzi, but the Scelzi family that recently grew by one.


“This is so cool,” Scelzi said. “My baby girl was born last Friday, and this is the first win being a dad, so I’m just kind of soaking it all in.”

The field took the green with DJ Netto and Shane Golobic leading the way. Golobic got the jump in his NOS Energy Drink/Elk Grove Ford 17W from the inside and stretched the early lead while Scelzi worked his way by a few cars early on to jump from sixth to third. A caution with six laps complete bunched the field back up.

Netto returned Golobic’s lap one favor by snagging the top spot in his Netto Ag/Penny Newman Grain 88N from the inside lane on the ensuing restart. Another yellow on lap nine and a red flag for Sean Watts on lap twelve brought the leaders back together, but the top three remained the same until the closing laps brought excitement.

As the lead trio navigated traffic with less than ten to go, Scelzi first picked off Golobic by rolling the bottom, and then snuck into the lead with a similar maneuver the next lap when Netto got trapped behind a slower car running the top.

“Sometimes its better to be second or actually third in that position,” Scelzi explained. “I don’t feel like I was better than either of these guys. That’s the cool thing about racing here, when it does get to the fence like that the top usually is the fastest place around here. When Shane got to him and they started racing, I was like ‘man I ran the bottom earlier in the night, and I felt really good, but nobody around me had done that. I knew I needed to stick the bottom because you only get one chance with these guys.”

A late red came out with six to go for Corey Day, but once racing resumed Scelzi went unchallenged the final few laps to claim his third Fujitsu Feature of 2021 and the twelfth of his career, but not without the notoriously tough Thunderbowl taking a toll on him. Day was unhurt in the accident.

“I’m gassed,” Scelzi said. “I’m going to have to get back to the gym on Monday.”