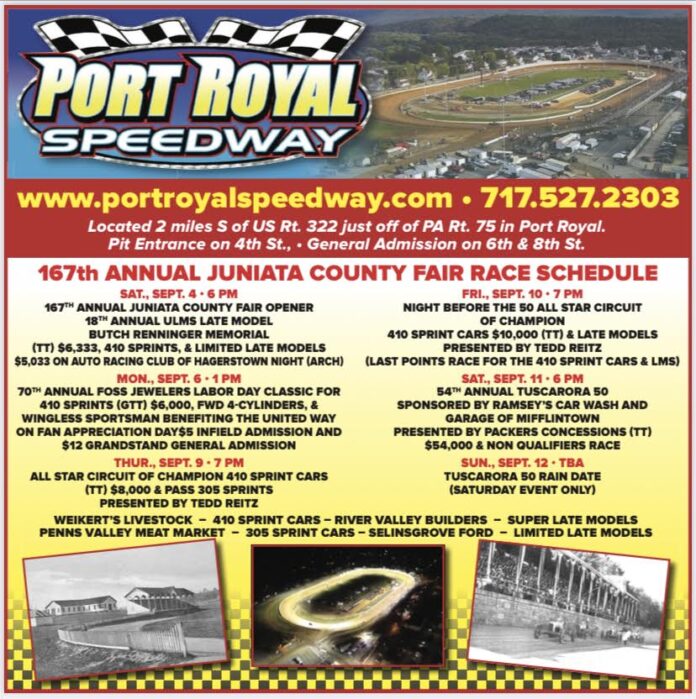 PORT ROYAL, PA – It’s that time of year again! Soon the smell of delicious fair food and the shrieks of excitement from children riding rides will fill the Juniata County air surrounding the Port Royal Speedway.

It’s the 167th Annual Juniata County Fair! As tradition has it, racing will again be a prime attraction during the fair. Racing will kick off during opening night of the fair on Saturday, Sept. 4th with the 18th Annual Butch Renninger Memorial Race featuring the ULMS Racing Series Late Models, the Selinsgrove Ford Limited Late Models and the Weikert’s Livestock 410 Sprint Cars.

The event honors the legendary Butch Renninger, who sits fourth on the all-time winners list in the Super Late model division with 41 career victories and three track championships to his name. Renninger also served diligently on the board of the speedway for decades and oversaw track preparation and concessions during that time.

Specific to the limited late model division, this will be the largest paying race for them in the history of the division and quite possibly the state. Not only will this add prestige and excitement to the event, it shows the continued growth of the Speedway and it’s support of all the divisions that compete at it regularly.

Crate motors will not be permitted to participate in the Limited Late Model portion of the event.

The 410 Sprint Cars will race for their regular $4000 to win in preparation for a big week of racing for the division.

To make this event happen, several key sponsors have come on board in support of it and the Renninger family legacy. Packer’s Concessions, LLC., Weikert’s Livestock, Mifflin Hill Beverage, Beerhill Gang TV, Mike Cleck Paving & Sealcoating, Inc., RV 4 Wheel Drive & Performance Automotive Inc and an anonymous friend of the Speedway have all chipped in various amounts to push the purses to new heights.

Also up for grabs for the drivers in competition will be several contingency awards presented by several more sponsors. Both the Super Late Models and the Limited Late Models will receive lap sponsor bonuses that will pay $33 per lap courtesy of fans and various sponsors.

In the Super Late Model division, heat race winners will receive $333 courtesy of Tedd Reitz, while fast time in qualifying will receive $133 courtesy of Snyder’s Radiator Shop.. There will also be a $133 hard luck award for the first non-qualifier courtesy of Gullwing Aviation, LLC and Pellman Trade.

For the Limited Late Model division, heat race winners will receive $100 each courtesy of Garman Concrete & Construction, while the Fast-Time Award winner will receive $133 courtesy of the The Gridiron Pub-New Page. Gullwing Aviation will present a hard-luck award of $133 to the first non-qualifier, while Pellman Trade will offer $33 extra to the highest finishing Juniata County driver in the field.

Admission for the event will be $25 for General Admission, $10 for Students and $35 for Pits Admission. Gates will open at 3:00pm EST, while racing is scheduled to kick off at 6:00pm EST.

All of this will lead into Monday, Sept. 6 for the 70th Annual Foss Jewelers, Inc. Labor Day Classic featuring the Weikert’s Livestock 410 Sprint Cars, the 4-cylinders and the Path Valley Wingless Sportsman division. Thanks to an anonymous donor, the 410 Sprint Car event will pay $6000 to win instead of the regular $5000 winner’s share.

Closing out the week will be the 54th Annual Tuscarora 50 sanctioned by the FloRacing All Star Circuit of Champions and presented by Ramsey’s Car Wash and Garage and Packer’s Concessions.

The three-day crown-jewel event will kick off on Thursday, Sept 9 and run until Saturday, Sept. 11. There will be rain date of Sunday Sept. 12 for Saturday’s portion only.

Finally, Saturday is the granddaddy of them all, the 54th Annual Tuscarora 50. As tradition, the event will pay $54,000 to win in accordance with the 54th running of the event. There will be a full-paying non qualifiers purse as well.

Saturday’s event will feature $200 to win heat races and $450 spread out among the top three in qualifying courtesy of Tedd Reitz. There will be several other contingency prizes throughout the weekend that are yet to be announced as well.

Prices for the weekend are as follows-

Stay tuned to our various social media outlets and our website www.portrpoyalspeedway.comfor more info and we thank you for your continued support during the 2021 racing season!