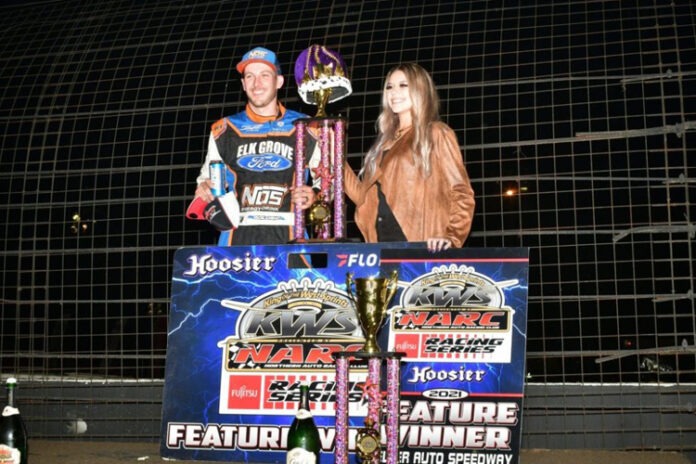 HANFORD, CA – Though he prides himself on being one of sprint car racing’s most consistent drivers, Shane Golobic doesn’t come to the racetrack to run second.

Heading into Friday night’s Anthony Simone Classic at Hanford’s Keller Auto Speedway, Golobic had finished in the runner-up spot five times in 410-competition since his last 410 win in November of 2019 with the NARC-King of the West Fujitsu Sprint Cars.

The Fremont native appeared headed for yet another second-place result at the Kings County track, but a determined Golobic refused to settle and earned both his 13th career victory and 50th career podium with NARC-King of the West in the Anthony Simone Classic.

“It’s pretty cool to win in honor of Anthony,” Golobic said in victory lane. “I didn’t have the chance to be really good buddies with him, but anytime we parked near him in the pit area he was nothing but cool to me. I always remember him as one of the coolest, most unique guys in the pits. It really means a lot to get this win in honor of him.”

The 30-lap Fujitsu Feature kicked off with Sean Becker on pole and Golobic to his outside. Becker paced the field early in his Starr Property Management/Morrison Concrete No. 83V on a hooked-up Hanford surface as Golobic and Bud Kaeding loomed behind him.

The leaders hammered around the tacky bottom groove and quickly approached traffic, but the yellow flag flew just as the front of the field was about to enter slower cars as Sean Watts stopped on the back stretch.

When racing resumed hometown hero DJ Netto ripped around Kaeding to climb onto the podium but then got out of shape on the next circuit, dropping him to sixth. Shortly after Netto’s mishap the caution came out again, this time for a stopped Justin Sanders in turn three.

The ensuing restart saw Golobic briefly take the lead from Becker, but the pass was negated by the reg flag coming out for a vicious flip in turn one from Michael Faccinto. Faccinto climbed from the car uninjured. The wreck prompted an open red as officials wanted teams to have to opportunity to adjust on their cars for safety purposes considering the lightning-fast track conditions.

Becker learned from the previous start and didn’t allow Golobic to grab the top spot on the restart. Golobic, piloting the NOS Energy Drink/Elk Grove Ford No. 17W hung right with Becker as the pair again neared the tail of the field.

Just as it appeared Becker would get some breathing room when Golobic bobbled out of turn two, Becker went a little too high in turn four on lap 13, allowing Golobic to slip by for the lead, one he would not relinquish.

“That front row starting spot was huge,” Golobic said of what helped him get the lead. “I didn’t get a very good start. Sean (Becker) actually got a really good launch on the outside there at the beginning, so I knew it was going to come down to traffic, and luckily he made a mistake in traffic and I was able to sneak by.”

After taking over the lead, Golobic didn’t let up. He built a comfortable advantage, picking off slower cars while Becker, Kaeding, Cory Eliason and Joel Myers Jr. all ran close together but stuck behind traffic.

Ultimately Golobic cruised to the victory with a huge lead and the $10,000 payday thanks to his expertise navigating the slower cars.

“Coming through lap traffic is huge on a racetrack like this,” Golobic said. “I had a couple close calls and obviously that’s how I was able to get Sean. It’s all about bouncing the right way and trying to position yourself as best as possible. Those guys that are racing back there are racing hard too.”

Cory Eliason climbed onto the podium on the final lap in his Rudeen Racing No. 26 after Bud Kaeding’s left-rear tire went down just short of the finish.