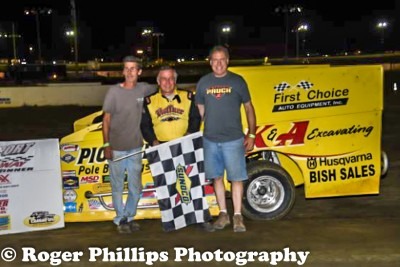 Kiely Construction will present the Lawrence Chevrolet 410 sprints in the speedweek opener going 30 laps in distance and paying $7,001 to win.

The HJ Towing and Recovery 358 sprint cars will also be in action for the speedweek opener.

The race is another in the 2022 Hoosier Diamond Series of races at the oval.

The Pennsylvania Speedweek Series runs June 24 through July 3 at area ovals with Williams Grove’s second race of the series on July 1 boasting the largest payout to win at $15,000 for the Mitch Smith Memorial.

Legendary modified and sprint car driver Billy Pauch of Frenchtown, New Jersey will be a special guest at the speedweek opener.

Pauch recently put his career on hold in April after getting the season underway and picking up a modified win.

And while stopping short of announcing his full retirement; the now 65-year old pilot has just released his biography.

With over 740 total career wins to his credit since his first in 1975, Pauch put up his biggest numbers in the modified ranks over the seasons.

But his numbers in a sprint car stand at 62 alone and it’s that portion of his career that Williams Grove will honor at the speedweek lidlifter.

Pauch is perhaps best known for his near decade spent in the potent Zemco No. 1 sprint car during the 1990s.

And to help pay tribute to Pauch’s career, Zemco car owner John Zemaitis and his current driver Logan Wagner will be in attendance for the speedweek opener.

The Zemco No. 1 will be on display in the Williams Grove infield beginning at 5:30 before while Pauch and three of his former car owners gather at the stage from 6 to 6:30 pm for interviews and autographs.

The acclaimed driver will then host a book signing of his biography, “THE LAST COWBOY: The Life and Times of Billy Pauch,”

Joining Pauch for the event will be Zemco owner Zemaitis along with No. 126 car owner Glen Hyneman and No. 55 car owner Gene Jenkins of Milton.

A plaque presentation honoring Pauch’s sprint car career will be presented following time trials and Pauch will again sign books in the infield immediately after the speedweek B Main.

Known to many as “Billy The Kid” during his career, Pauch put up 15 sprint car wins during his tenure at Williams Grove while overall laying claim to victories over the World of Outlaws, All Stars, USAC, CRA, SCRA and KARS.

Last year in speedweek action at Williams Grove, Lance Dewease swept both shows while on his way to the track title.