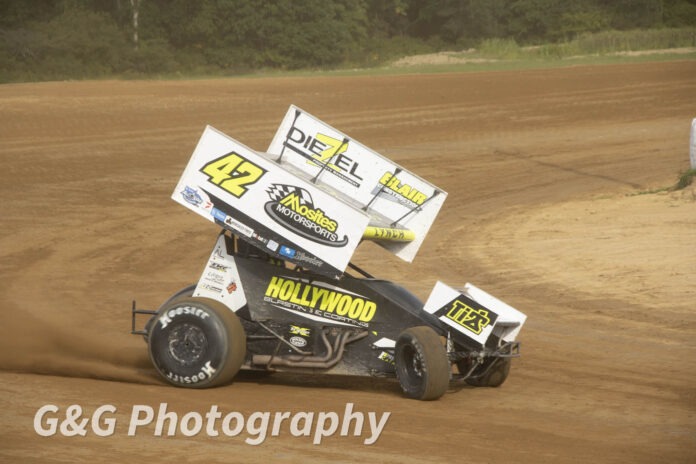 KNOX, PA – Mother Nature messed with the track crew at Knox Raceway on Sunday, but their determination paid off as they were able to complete the show with no rain in the area or at the speedway all afternoon and evening.  Sye Lynch from Apollo, PA had never been to Knox Raceway or Sportsman’s Speedway back in the day, so the track was new to him.  That did not stop his dominance of the 410 Sprint Car race though as he took home the top prize money of $4,000 and the first 410 Sprint Car feature win under the ownership of Brian and Brianna Steinman.  Brandon Conner picked up the win in the Penn-Ohio Pro Stock feature with Andy Priest taking home the checkers in the RUSH Wingless Sprint feature.  The Open Jr. Sprint feature was won by Kalen Jackson with Logen Lockhart winning the Stock Jr. Sprint feature.  The great-grandson of the late track owners, Sam and Bonnie Colwell was injured in a go-kart accident on Thursday night and the kids in the JR. Sprints brought their helmets to the stands and collected $1,676 for the Colwell family to help Kole mend and get back to the track.  Get Well wishes go to Kole Colwell and his father Kyle who suffered a leg injury trying to get to the accident scene.

Knox Raceway started off with 4-car qualifying for the 410 Sprint Cars and Logan McCandless was the fastest with a time of 14.689 seconds.  Sye Lynch held second fastest time with 14.912 seconds.  When feature time came the 13-car field of 410 Sprints found Brandon Matus and Sye Lynch leading the field to the drop of the green.  A caution flag waved after the first lap was completed for Leyton Wagner who spun in turn four.  After the restart, Matus led the first two laps of the feature before Lynch took over the top position coming off of turn four.  Lynch started lapping traffic by lap six and continued to extend his lead before the caution was displayed for Gale Ruth, Jr. who spun in turn three on lap thirteen.  On the final restart it was all Lynch as went on to pick up the win by a quarter of a straightaway ahead of Brandon Spithaler, Brandon Matus, Cody Bova and Jack Sodeman, Jr.  Heats were won by Logan McCandless and Sye Lynch.

The Penn-Ohio Pro Stocks were next on the track and Andrew Gordon and Hunter Exley brought the field to the drop of starter Bryan Wagner’s green flag.  Brandon Conner took the lead coming off turn four from his third starting position on lap one, but the caution was displayed before the second lap could be recorded in the books for Tyler Wyant who spun and collected Jay Blum and Josh Seippel in the melee.  Wyant and Seippel were done for the night, but Blum was able to continue.  Once back under green it was all Brandon Conner as he led from green to checkered in the 20-lap event to collect the win.  Finishing a close second was Bobby Whitling followed by Hunter Exley in third.  Fourth place went to Andrew Gordon with Jackson Humanic fifth.  Heats were won by Hunter Exley and Andrew Gordon.

The RUSH Wingless Sprint Cars saw Joe Buccola and Gale Ruth, Jr. bring the field to the start of the 15-lap event and it was fourth place starter, Andy Priest who took the lead on lap one.  The race went green until lap twelve with Priest in command of the field and Ruth, Jr. in close second before the caution was displayed for Tyler Clark who spun in turn three.  With three laps to go Priest brought the field back to the green and went the distance to pick up his first win of the season at Knox Raceway.  Finishing second was Ruth, Jr. with Arnie Kent coming from sixth to finish third.  Fourth went to Joe Buccola with Blaze Myers rounding out the top five.  Heats were won by Andy Priest and Blaze Myers.

The next event at Knox Raceway will be held on Sunday, September 11th with the return of the 410 Sprints, Penn-Ohio Pro Stocks, and the RUSH Wingless Sprints.  Racing is to start at 6pm.

Knox Raceway, a 3/8 mile clay oval owned by Brian and Brianna Steinman was purchased late in 2021 and has opened for the season in 2022 to provide entertainment for the local community by hosting Demolition Derbies, Truck and Tractor Pulls, Circle Track Racing and in the future Rodeos, Concerts, and many other fun events.