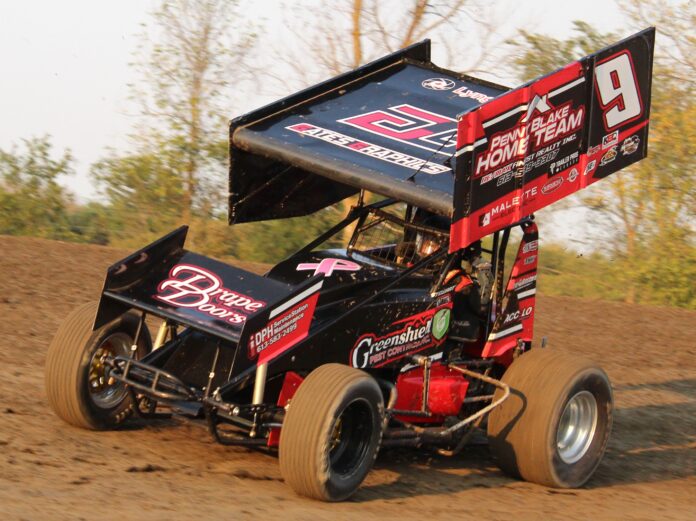 AMELIASBURG, ON-Throughout his career, Adam Turner has wheeled several different racing machines on some of the sport’s legendary dirt tracks on both sides of the border.

The second-generation speedster from Ameliasburg, Ontario – who will celebrate his 40th birthday just over a month before the start of the upcoming season – used a 9th place finish in his second-ever Sprint Car start as the stepping stone to landing a seat in equipment that could see the 2023 schedule as one of the most active of his vocation. Turner has joined forces with Luke Stewart Motorsports to campaign the team’s No. 9 machine during the year.

“I really have to thank Luke and Glenn Stewart and the team for the chance to wheel this top-shelf equipment,” said Adam Turner. “We still need to sit down and talk about the full season’s line-up, but it will be a very busy year with a lot of travelling. I’ve always been the type of racer who’ll run anything, anywhere I can, so I’m really looking forward to getting the season started.”

In addition to the Sprint Car, Adam Turner says he’s looking to campaign his No. 92 Late Model as often as possible during the 2023 season. Once the tracks release their schedules, they’ll have a better idea of which car to load into the hauler and which direction to head to get to the next race. Depending on his work schedule, the driver says he could end-up running as many as 3 shows in a weekend.

“This has the potential to be a strong year,” Turner said. “After my seasons racing my Street Stock, Sportsman and 358 Mod rides at Brockville, my guys know the group of people that looks after the Sprint Car and everyone works well together. There aren’t enough words to describe the support and encouragement I’ve received from my sponsors, fans, family and friends as I head into this fresh adventure.

Even with snow still on the ground and a couple of months or more to go before the local racing season gets underway, Adam Turner and his race teams are working hard to get things ready for the first green flags of the new schedule.