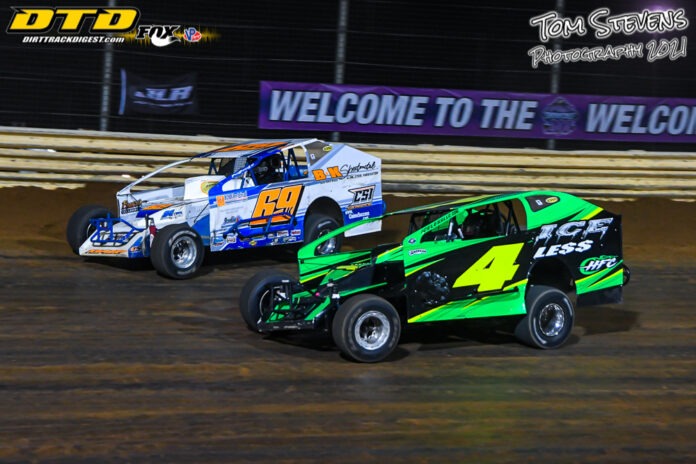 Sean Metz and Steve Kemery lead the 36 car starting field to the green flag with Metz jumping out to the early lead on the start, but it was Kemery who lead the first lap using the top side of the speedway but action was quickly slowed as Logan Watt tangled with Doug Kline which sent him spinning in the middle of the backstretch.  Unfortunately for Watt, he went off on the hook after the 78 of Grand Hilfiger made heavy contact with the 4m while he was stopped on the backstretch.

When the race restarted it was Kemery who lead the field to the green. However the race was slowed again for a yellow flag after Brad Brightbill made heavy contact with the turn four wall.

As the race got going once again it was Brian Krummel who was making moves from his third starting spot, making his way by the 05 of Sean Metz taking away the runner up spot.

From there Krummel set his sights on the 69k of Kemery with Krummel working the low side of the speedway and Kemery working the extreme outside.  Kemery was able to hold off the challenges of Krummel as the field completed the 10th circuit.

Behind the leaders it was Fonda Speedway Track Champion Chad Edwards who was making moves, battling with Tanner Van Dohren and Doug Kline for the 6th position.

Just as the leaders were about to hit lapped traffic on lap 14 the yellow flag flew once again as Dakota Kohler lost a right rear wheel and hit the outside wall in turn 2.

On the restart it was Krummel who worked the middle of the speedway trying to make a move on the Kemery machine but momentum for Kemery helped him keep the position as the field completed lap 20.

Behind the leaders the 20C of Cole Stangle and the 14T of Payton Talbot, made their way into the top 10 after both started deep in the field.

As the race reached halfway Stephen Kemery had found a rhythm and had opened up over a 1 second lead on the 4K of Krummel, who had nearly a 2 second lead on Joe Toth and Chad Edwards.

With leader Stephen Kemery in lapped traffic, Brian Krummel started to reel in the 69K machine and closed the gap to only .5 seconds as the leaders completed lap 30.  Meanwhile, Cole Stangle and Payton Talbot were both continuing their charge to the font as Stangle found is way to 6th with Talbot 7th after starting 27th.

A close call with a lapped vehicle allowed the 4k of Krummel to close right up on the Kemery machine throwing a slide job in turns 3 and 4 but it was Kemery who was able to maintain the lead.

With only 8 laps remaining it was still Kemery holding off Krummel for the lead, with Krummel trying to do whatever he could to gain an advantage on the 69k machine as they both sliced through lapped traffic.

Unfortunately for Krummel, Stephen Kemery was on his game in lapped traffic and did not give the 4K machine another shot at the lead, earning the victory after leading all 50 laps in the main event.

In victory lane, Kemery was quick to praise Krummel for their race throughout the 50 lap feature event.  “Brian ran me clean, we never touched.  I got on top of the cushion a couple times because he was pinching me but it’s all hard racing.  I’d do the same thing for $4,000 so I give Brian a lot of credit.”

“I kinda never saw Krummel again after we traded sliders, but I was making some moves through the lap cars.  I didn’t care if I was coming across their nose or not.  It was for $4,000 and I was either gonna checker or wrecker it” said Kemery in victory lane after being asked about making his way through the heavy lapped traffic.

Brian Krummel finished in the second position with Joe Toth, Cole Stangle and Tanner VanDohren rounding out the top five.