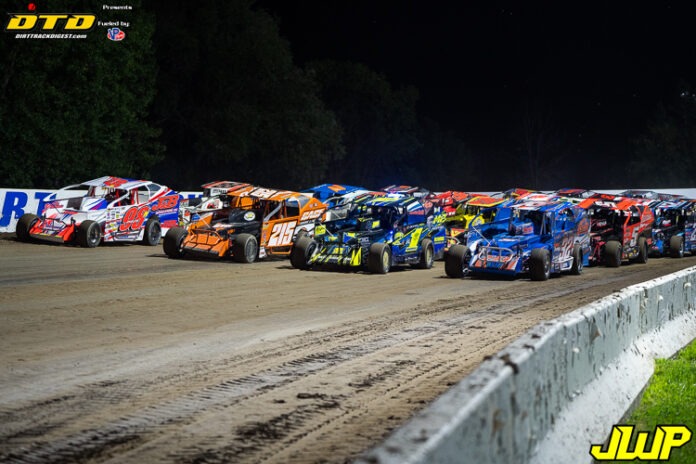 SummerFAST is officially underway and night one presented its share of surprises as the Super DIRTcar Series launches an endurance tour of four consecutive nights on Central New York race tracks.

Jimmy Phelps provided his fans with a generous opportunity to cheer as he passed pole-sitter Ronnie Davis III on the eighth lap to finish 2.7 seconds ahead of Mike Mahaney.

Matt Sheppard finished third while small-block competitor Dave Marcuccilli surprised many with his ability to remain toward the front of the field throughout the 100 laps of the Hall of Fame event. Chris Hile ran a steady race to finish fifth.

Phelps last won a Super DIRTcar Series race at the Weedsport Speedway back in 2010 and a dozen years later he made his return.

Afterwards, Jim told Dirt Track Digest, “This is just huge. It’s been a decade since I won my last series race here. I think we got the ball rolling a couple weeks ago in the 358 win here during the Outlaws shows. This (big-block) is the real deal and this is what we do it for. It feels really good right now.”

Phelps wasn’t good to start the night, but made the redraw and started on the outside of the front row for the main.

“When the night started we had an okay time trial, but in the heat I wasn’t comfortable at all,” said Phelps. “The guys tweaked it and hit it. Our goal was to roll the middle and we did it. We simply didn’t have a car that was capable of winning during hot laps tonight. However, I have to admit the redraw was huge for us.”

Mahaney, drew seventh, and remained as far back as eighth thru the 53rd lap. He found his way to sixth on the 67th, to fifth on the 74th and then passing Hile three laps later he was in fourth.

With 14 to go he got under Marcuccilli coming out of four for third and with nine laps to go went outside of then runner-up Sheppard for second.

Mike explained, “I had to work for every spot out there tonight. I feel good. The car came in a little late. It was strong at the end of the race. If I could have dialed it in earlier it might have helped.”

It explained it was a ride and wait situation early on, but when the car started to come around he was able to pick up valuable spots.

He had a good battle with Marcuccilli and noted, “Dave is a good racer. This is almost like a home track for him. He is really a good guy to race with.”

Mahaney chased him for quite some time before picking up a key podium finishing spot.
Sheppard, who had won the last two series races, appeared a bit philosophical, saying, ”I guess we were a little too good too early. It was a good run, but it died a little at the end. We were a little off tonight, but it was a good points night.”

Marcuccilli was all smiles pit side, telling DTD, about his fourth place run.

Hile started fifth and finished fifth, but he said, “It’s good. There was one restart late that I thought maybe I could roll the middle and pick up some spots, but I couldn’t carry the momentum I needed. We were off a little and we will keep tweaking. The tires are still good.”

And so the Super DIRTcar Series will roll on to night number two at the Brewerton Speedway as the SummerFAST celebration continues.