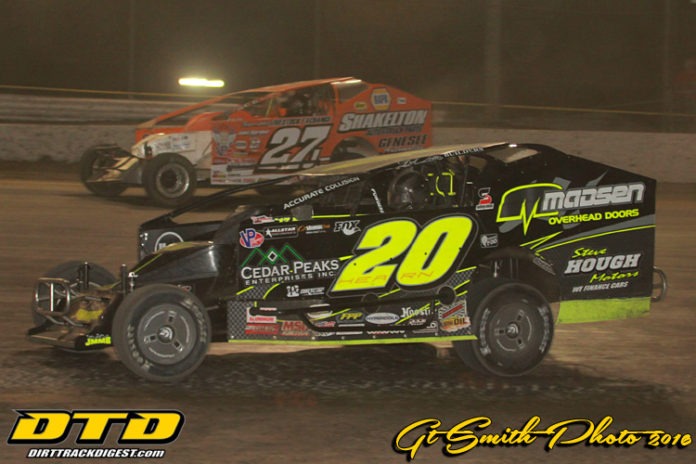 CONCORD, NC – Over the course of the 117-day off-season, a lot can change – some of it surprising, and some far too predictable. One thing is for sure, the Super DIRTcar Series offseason has been abuzz.

The 2017 schedule will have a slightly different feel to it from previous seasons. The Super DIRTcar Series will cover 25 tracks, spanning over six states and two Canadian provinces. The Series will make its return to the 5/8 high-banked dirt oval Bridgeport (N.J.) Speedway and the 3/8 semi-banked clay oval Oshweken (Ont. Canada) Speedway. For the first time, the Big-Block Modifieds will take on the newly converted dirt track of Airborne Speedway (Plattsburg, N.Y.) and the fast four-tenths-mile Outlaw Speedway (Dundee, N.Y.).

The 2016 season was dominated by none other than the now five-time Super DIRTcar Series Champion Matt Sheppard. Sheppard collected 12 Series wins, breaking the Series record for the most wins in a season. The previous mark was set at 10 by Billy Decker.

The Waterloo native was recently recognized for his accomplishments with top honors as the Richie Evans Memorial Northeast Driver of the Year at the Eastern Motorsport Press Association (EMPA) Hall of Fame Banquet.

While drivers and crews have been working hard on their machines over the winter break, a look ahead on what to expect surrounding the 2017 Super DIRTcar Series season.

Big-Block Modified personality, Peter Britten, was recently released from HBR Racing in late-December. Britten was not without a ride for long as he landed a ride with veteran racer Andy Romano. Britten will make the haul south for DIRTcar Nationals to run with the Super DIRTcar Series in February, but thereon plans to race at Albany-Saratoga Speedway’s weekly shows under the Friday night lights

One of the biggest Super DIRTcar Series standouts will be turning a new key. Earlier this week, last year’s Bud Light 300 Champion Stewart Friesen announced that he plans to race full-time in the NASCAR Camping World Truck Series for the 2017 season. Friesen, the runner-up in last season’s point rankings, was quoted in a recent article that he still plans to race at least two nights of DIRTcar Nationals with hopes of running a third depending on his NASCAR schedule. With new Big-Block Modifieds currently being built, do not expect Friesen to shy too far away from the Super DIRTcar Series in 2017.

The offseason allows teams to regroup and prepare for the upcoming season. While drivers and teams make their changes, two notable drivers will be joining the illustrious Super DIRTcar Series team this season.

The young gun from Fayetteville, N.Y., Mike Maresca, ran more than half of the Super DIRTcar Series races last year and is now looking to join the national tour.

“We visited a lot of the tracks last year in our first year with the Big Block and decided that it was time to compete on the highest level and try to get our program together,” Maresca said.

Maresca’s best finish with the Series came in October during Super DIRT Week as he collected an eighth place finish in the Bud Light 300 at Oswego Speedway.

The driver of the No. 96 Big Block Modified, J.F. Corriveau, will also be making the leap into the Series as he will be joining Maresca and other returning teams for the 2017 season.

Super DIRTcar Series Rookie of the Year, Max McLaughlin, will be one to keep your eyes on as he heads into his second full season with HBR Racing and the Super DIRTcar Series. The 16-year-old McLaughlin was recently awarded the John Blewett III Young Guns Award at the EMPA Awards Banquet for his efforts. The second-generation driver – the son of ‘Magic-Shoes’ Mike McLaughlin – is based out of Mooresville, N.C. came off of his first season with a strong 13th-place finish in the point’s championship. McLaughlin’s best finish of 2016 came in July at Sharon Speedway with a sixth-place finish.

Another challenger on the Series out of King Ferry, N.Y., Mike Mahaney, finished his first season on the tour with an 11th-place finish in the series championship point standings. The driver of the No. 88 Buzz Chew Racing has several Big-Block Modified wins under his belt but has his sites set on his first ever Super DIRTcar Series victory.

For the first time in 20 years, the Super DIRTcar Series winningest driver went winless in 2016. Despite Brett Hearn’s unusual season, the Super DIRTcar Series eight-time champion is no stranger to victory lane. Hearn is just eightwinsaway from reaching the remarkable milestone of 900 career wins across his racing career. Hearn’s first shot at adding to his win total will come at DIRTcar Nationals in February.

The Super DIRTcar Series regular, Larry Wight, is making his second appearance at the annual Lucas Oil Chili Bowl Nationals this week and is making it known where his racing roots are from.

“Me and (Tim) McCreadie are the only modified guys from the northeast,” Wight said. “We’re kind of hidden up there with our slick tracks and this is when it helps us. Normally we don’t race until Volusia (DIRTcar Nationals) so to break the dust off the fire suit and the helmet in the beginning of the year helps get the ball rolling for the momentum.”

Five nights of qualifying, more than 370 drivers competing in arguably one of the biggest dirt races of the year and Super DIRTcar Series regular, “Lightning” Larry Wight has locked it into Saturday Nights A-Main.

The Super DIRTcar Series first race of the season will kickoff at Volusia Speedway Park in February for the DIRTcar Nationals as Series regulars will take on invaders from all across the Northeast in hopes to bring home the coveted “Big Gator” trophy. The DIRTcar Nationals offers four nights of ground pounding, earth shaking, window rattling, Big Block Modified action-packed racing at the fast half-mile on February 22-25th.