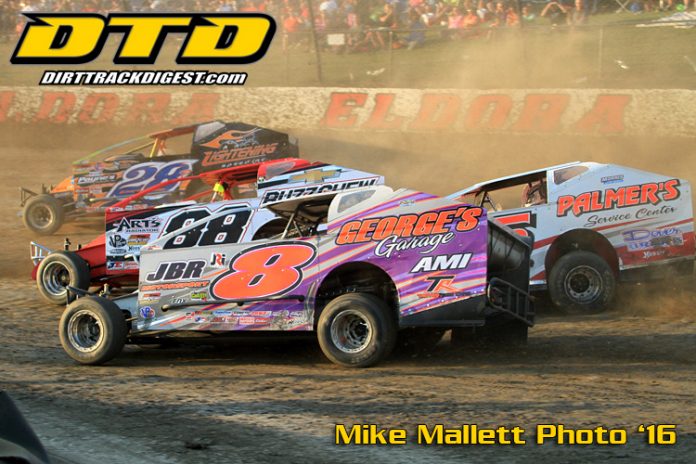 CONCORD, NC – The Super DIRTcar Series is gearing up for one of the most exciting weeks of the season later this month. The Series heads to Eldora Speedway for a pair of dates at the Rossburg, OH track with the Tuesday Night Tailgate on July 18 and All-Star Invitational on July 19 alongside the NASCAR Camping World Truck Series. The Series will then make a return trip to Sharon Speedway in Hartford, OH for the Buckeye Ground-Pounder 100 on July 20.
The Series made a triumphant return to Eldora last season after a 10-year absence. A total of 58 Big-Block Modifieds arrived for action at The World’s Greatest Dirt Track® last year, but when the checkered flag waved, it was Tim Fuller who stood in Victory Lane. Fuller had the advantage last season at Eldora with his previous Dirt Late Model experiencing helping him best the rest of the field.
“It definitely didn’t hurt me,” Fuller said of his Eldora experience at last year’s event. “We had a pretty good car going in there and, actually, after that we were running pretty well everywhere. It’s a bit of a unique place and it runs a little bit differently than others.”
This year’s Tuesday Night Tailgate will see the Super DIRTcar Series stars battle for 75 laps at the Big Ohio half-mile. Current Series point leader Billy Decker earned a top-five finish at Eldora last year. Decker hopes to improve on that this year and doesn’t feel the challenges at Eldora are different from any other race.
“There’s nothing in particular (that makes it challenging),” Decker said. “I haven’t won at Eldora yet. I was really close one time and a lapped car got in the way. It’s quite a prestigious place. It’s fun to be involved in places that put on big events. I’m looking forward to it.”
The Super DIRTcar Series only makes one trip to Ohio each season, which means many of its full-time drivers only see Eldora and Sharon once per year. Often it’s an enjoyable trip for the Series regulars who get to break the mold of their regular New York routine.
“I do like it,” Fuller said. “It’s nice to get some variety instead of being up here (in New York) where the tracks are stagnant and you run the same old ones. It’s good to get out.”
The rarity of a Super DIRTcar Series show at either track often means a sold-out crowd is in attendance. This year doesn’t figure to be any different at Eldora or Sharon. Both Fuller and Decker are grizzled veterans of the Series. They treat each race the same regardless of attendance, but certainly enjoy celebrating in front of a capacity crowd.
“I like Super DIRTcar Series races,” Decker said. “That’s what gets me pumped up. I don’t need any more motivation than that.”
“20,000 or 1,000, It doesn’t matter to me,” Fuller said. “It only matters to me at the end of the night.”
Following the Tuesday Night Tailgate at Eldora, the Super DIRTcar Series Big-Block Modified full-time drivers and the next three highest finishing drivers from Tuesday’s feature will qualify to the all-star invitational during Wednesday’s Eldora Dirt Derby. The race will feature qualifying heat and an inversion draw to set the field with up to 14 cars inverted for the 25-lap main event. The next night, the Series travels to Eastern Ohio for the Buckeye Ground-Pounder 100 at Sharon.