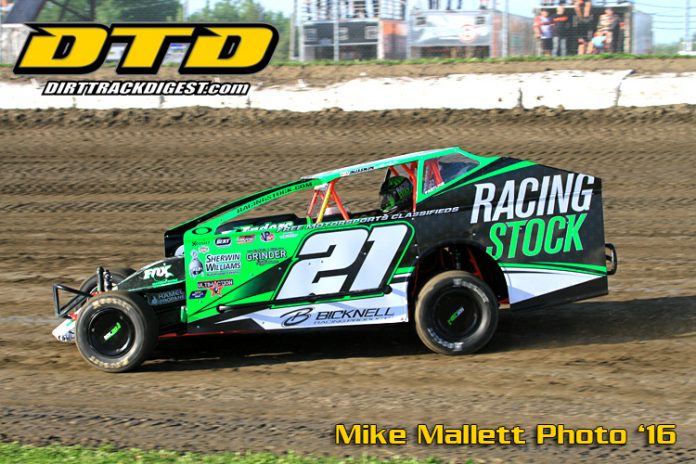 CONCORD, NC – One of the most popular stops on the Super DIRTcar Series Big-Block Modified Tour is the annual summer trip to the beautiful province of Quebec with back-to-back stops at Autodrome Drummond and Autodrome Granby with Drummondville being the first stop on Monday, July 24.

Current Drummond track points leader and 2017 Feature winner Steve Bernard is looking forward to this stop at one of his local tracks. ”We are confident in our equipment. We had our motor refreshed in preparation for Volusia,” mentioned Bernard, who ran his Nokian Tires #54 Big-Block Modified at Airborne Park Speedway last week, bringing home a solid eighth-place finish. ”We hoped to use Airborne and Cornwall [which was rained out] to get some laps on the car and get ready for the Quebec tour.”

Bernard believes that to collect a podium finish at Drummond in the Super DIRTcar Series, he must have a good start. Being good early in the night is the key to success. ”We need to be fast in time trials and our heat in order to secure a good starting spot in the Feature. If we do that, our chances are better to accomplish a good result.”

Dealing more on the promotion side of things this season, track promoter Yan Bussière will go back to his old habits doing double duty, taking his familiar Racing Stock #21 Big-Block powered machine out for this event. ”I can’t wait to get back in a car for this event,” said Yan Bussière. “It will be a busy night for me. I need to prepare the track, do promotion and drive my modifieds, but it should be an exciting night!”


Last season, we saw a great story unfold as Frank Cozze visited the winner’s circle after eight years without tasting victory in the Super DIRTcar Series. Cozze had started19th on the grid and took home the win over Larry Wight and Mike Mahaney.

With the current Series points battle being so close, the top 10 drivers still have a great chance of taking the coveted championship, with Billy Decker, Stewart Friesen, Brett Hearn, Matt Sheppard, Larry Wight, Jimmy Phelps, Pat Ward, Tim Fuller, and Max McLaughlin right in the mix. Other Series regulars, such as Keith Flach, Brandon Walters and Rich Scagliotta, will be joining the group.

Joining Bernard and Bussiere, we can expect to see several local runners with Big-Block power plants in their racing machines, among them David Hebert, JF Corriveau and Steve Bernier.

Last season a solid field of 41 cars filled up the pits, and we can expect similar figures for the 100-lap event this year. Again, the grandstands will be at full capacity with the Super DIRTcar Series visit being a marquee event.

The pit area will open at 3:30pm with the grandstands opening at 4:30pm, racing action is scheduled to start at 6pm, for more information, please visit the speedway website at www.autodromedrummond.com or at www.superdirtcarseries.com.