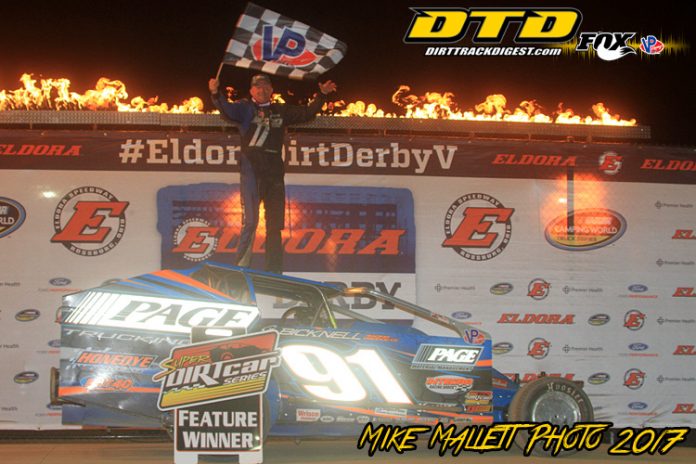 By CLAYTON JOHNS
ROSSBURG, OH – Billy Decker started on the pole and dominated all 75 laps on a very fast track to win the Super DIRTcar Series Tuesday Night Tailgate at Eldora Speedway. Decker had to outrun second-starting Pat Ward on a number of mid-race restarts and a final one with 12 laps remaining to earn his Series-leading third victory of the season. The win was also the 68th in Decker’s Super DIRTcar Series career.

“I really wanted a win at one of the marquee speedways,” Decker said following the win. “It’s big, It feels really good.”

Ward had to be strong in his own right to hold off Matt Sheppard who survived a furious and chaotic battle inside the top-five to claim the final spot on the podium. Brett Hearn and Peter Britten rounded out the top-five.

Decker was strong from the drop of the green flag and chose the outside lane for the start of the race, a rare occurrence. However, the Unadilla, NY native was tough right away and jumped out to an early advantage.

“They tilled the track a little bit, but I think (the racing groove) was going to end up there anyhow,” Decker said of the preferred groove. “When you pull a good number and…you’re going to have a forgiving racetrack and you couple that with a fast racecar, it feels pretty good.”

After Decker worked his way into traffic on lap eight, there were some tense moments. On lap 11, Decker got stuck behind CG Morey’s No.14 as he tried to put him one lap down. He got past Morey in the next corner, but lost half of the advantage he had built over Ward.


“Early on, I thought I found a line where I was gaining a little bit before we hit that heavy lapped traffic,” Ward said. “Then, I think it got so top-fast that the bottom wasn’t working and I couldn’t get anything. [Decker] started pulling away, he was running the cushion a lot better than I was.”

The first caution of the race waved shortly afterwards on lap 14 when Erick Rudolph slowed to a stop in turn two. Shaun Pangman suffered a flat tire on the restart, which slowed the race again. Pangman’s night ended when he hit the outside wall in turn one on lap 33.

“The lapped traffic was getting a little bit dicey,” Decker said. “A couple of guys would run a line and move in the next turn, which makes it hairy and I thought I fired really good on the restarts. Given that I restarted so well, I didn’t mind the cautions.”

Ward knew he didn’t have ability to get by Decker on the restart as did his best to work the inside lane.

“Once he got to the top in one and two, I could almost drag up even with him out of four a couple of times, but you lose your momentum when you try to run down on the bottom,” Ward explained. “He just started to pull away after that.”

The restart on lap 39 saw Peter Britten positioned in third ahead of Sheppard and Stewart Friesen. Britten held the spot solidly as he also found speed in the outside lane behind Decker and Ward. That changed, however, on a lap 49 restart following a caution for debris when Sheppard and Brett Hearn both got a better jump out of turn four and shuffled Britten back to fifth.

Two more caution followed on lap 56 and lap 63 and each time Decker was up to the challenge. The lap 56 caution came for Tim Fuller, who earned the Speedy First Aid Hard Luck award, after he suffered mechanical issues while running inside the top-10.

On the final restart, Hearn ducked to the bottom of Sheppard for the third spot, but couldn’t keep the same momentum in the lower lane. The final 12 laps allowed the field to fall single-file and Decker to cruise off to the victory ahead of Ward, Sheppard, Hearn and Britten.

The restart were chaotic behind the two frontrunners with drivers often ducking low to try and get a run out of turn four. The end result was often three- and four-wide battles into turns one and two.

“It seemed like row two and row three were a free for all on those restarts,” Sheppard explained. “I got up to third early there and I think I fell back to fourth and I might have been back to fifth at one point. Luckily I got a good restart on one of the restarts and I was able to stay there until we went single-file.

The track was wide, with the cushion about a half lane off the outside wall, but still heavy and fast after the track crew added water to the racing surface before the main event. It created a physically demanding task for each driver on track.

The victory helped Decker take a 26-point leader over Larry Wight in the championship standings. It also offers his team a morale boost, but Decker isn’t going to get too comfortable.

“Winning fixes a lot of things, but it doesn’t fix everything,” Decker said. “You can’t get that stuff back that you giveaway. We’ve had a couple of tough Series races ourselves, but when you come back and you win it helps you look forward rather than look back.”

Wight, however, hit the turn three wall on the first lap of his heat. He suffered right-side damage to his No.99L and has to qualify through the Last Chance Qualifier. Wight drove to a ninth-place finish in the main event.

The Super DIRTcar Series returns to action on Wednesday, July 19 at Eldora for the all-star race at the Eldora Dirt Derby alongside the NASCAR Camping World Truck Series. For additional event information and to purchase advanced reserved seating, please visit www.EldoraSpeedway.com.

The series then travel to eastern Ohio for a return trip to Sharon Speedway in the Buckeye Ground-Pounder 100 on Thursday, July 19.

“Hopefully we can build a little bit of momentum on it,” Decker said of his victory. “Maybe we can get over that hurdle too. We just look at it one race at a time. We’re looking forward to going to Sharon. We had a solid run there last year. Hopefully we can do that again this year.”