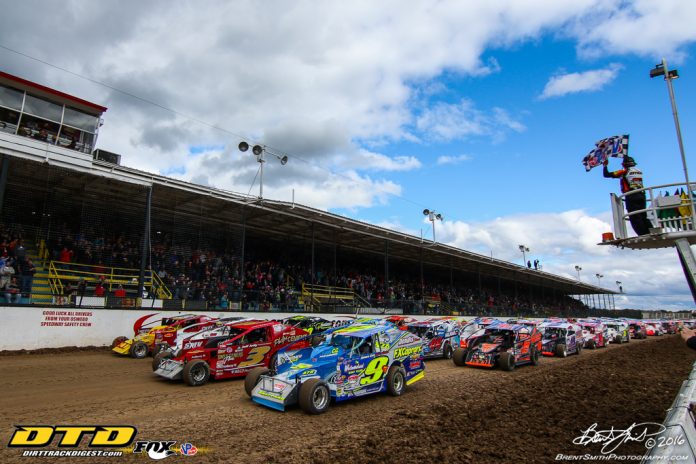 CONCORD, NC – In less than two short months, the grounds of Oswego Speedway will be invaded by with racecars, drivers, crew members, and DIRTcar Racing fans attending the 46th annual NAPA Auto Parts Super DIRT Week at Oswego Speedway from October 1-8, 2017.
Racing’s Biggest Party attracts thousands of fans and competitors from all over the country, all of whom contribute multi-millions of dollars to the local economy. NAPA Super DIRT Week at Oswego Speedway kicks off on Sunday, Oct. 1 with the opening of on-site camping. The week-long event concludes on Sunday, Oct. 8 with the running of the NAPA Super DIRTcar Series Big-Block Modified crown jewel- the Oswego 200.
Oswego Speedway will once again undergo the transformation from “Steel Palace” into “Clay Palace” as nearly 9,600 cubic yards of clay will cover the 5/8th-mile paved oval. DIRTcar Racing officials will take over the legendary speedway on Labor Day, two weeks earlier than last year to prepare an optimal racing surface.
In preparation for last year’s move to Oswego Speedway, many improvements were made to the historic Oswego Speedway: renovated grandstands, updated camping lots and new roads. This year, the team will fine tune the facility to improve on an already successful event at Oswego Speedway. Some featured upgrades for 2017 will include more on-site parking and on-site transportation improvements.
Back by popular demand, a parade of horsepower will take course through the town to officially kick off the festivities at Oswego on Wednesday. Every division on site for NAPA Super DIRT week will be represented as the racecars take a lap through the streets of Oswego, NY.
On-track activity at Oswego Speedway will begin shortly after the procession through town, tentatively starting at 3 p.m. with the Super DIRTcar Series Big-Block Modifieds followed by DIRTcar Racing’s 358-Modifieds and Sportsman Modifieds practice sessions.
Thursday’s action includes time trials for the 358-Modifieds and the Big-Block Modifieds which will determine the top-six starting positions for each division.
Friday’s racing action will take place under the lights as part of the “Friday Night Lights” show featuring 358-Modified Twin-25 Features and the Sportsman Modified 15-lap qualifiers. The night will be capped off with Triple-30 Big-Block Modified Features.
Saturday will host additional practice and Last Chance Qualifiers. Afterwards, the 358-Modifieds will have their chance to shine with the Salute the Troops 150.
The final day of the 46th Annual NAPA Super DIRT Week will kick off with the Sportsman Modified Chevy Performance 75 on Sunday.
Among the many fan-friendly events to take place during the week is the Super DIRTcar Series Big-Block Modified driver autograph session, which will immediately follow the Sportsman Modified race on Sunday.
The Biggest Big-Block Modified race is scheduled to begin at 1:30pm with opening ceremonies.

Aside from all the great action that will happen on site at Oswego Speedway, five satellite events away from Oswego Speedway will take center stage with full racing programs. Utica-Rome on Tuesday, Oct. 3 will kick off the action. Weedsport Speedway on Wednesday (Oct. 4), Brewerton Speedway on Thursday (Oct. 5) will follow. Fulton Speedway on Saturday (Oct. 7) will gives drivers a chance to earn the final starting spot in the 46th annual NAPA Auto Parts Super DIRT Week Oswego 200 with the running of the Twin-25s. Headlining Saturday nights action will be the World of Outlaws Craftsman® Sprint Car Series.