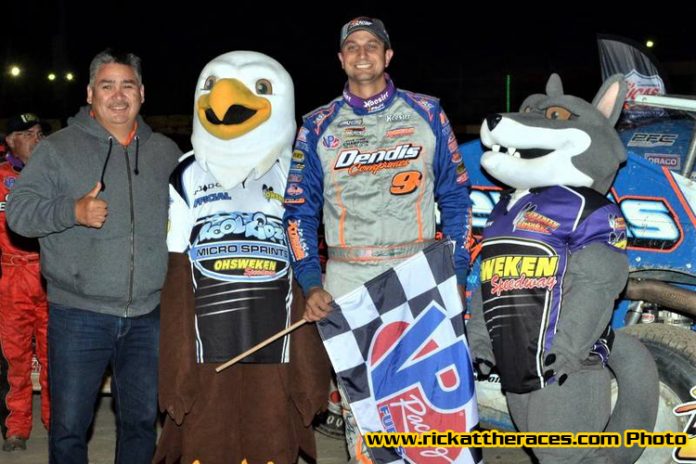 OHSWEKEN, ONT – The first 49 laps of the Triple Crown Showdown were a side-by-side battle between polesitter Larry Wight and front row starter Chad Brachmann, but the final 25 laps were all Matt Sheppard on Thursday night at Ohsweken Speedway. The reigning Super DIRTcar Series champion took the lead from Brachmann on lap 50 following a restart and couldn’t be stopped on the way to his fifth straight Series victory. Brachmann finished second after winning the Series’ inaugural event at Ohsweken in 2015.
The race provided an interesting set of circumstances for the field of 25 drivers in attendance. A late evening rain and mist after all heat race competition had been completed led to a 45-minute rain delay. The track crew kept the racing surface in order and the Big-Block veterans of the Super DIRTcar Series produced a thrilling show when the green flag waved just after 11:00pm before Sheppard drove from 12th to earn the win.
“Mother Nature didn’t want to see this race happen tonight, but I’m thankful we got it in,” Sheppard said. “It’s unreal. We saw the rain there earlier tonight and picked the worst number of the bunch in 12, but as usual these guys gave me an awesome racecar. It was a lot of fun out there. We’ve only been here once before. It’s a very wide, racey, fast track. We were running the bottom, top and middle. I’m just really thankful to be here tonight. Five in a row, unbelievable.”
Brachmann led the opening two laps before Wight retook the top spot on lap three. He paced the field through to the first caution for a big piece of debris on the front stretch with 12 laps complete. Following the restart, Tim Fuller appeared to be making his way forward as he moved into fourth and third-running Billy Decker challenged Brachmann for second.
By lap 30, it was clear Sheppard not only had a top-five car, he was a contender when he got by Fuller for fourth. One lap later, Stewart Friesen’s day ended when he slowed in turn four with mechanical problems to bring out a yellow flag. Friesen was running in the top-10 at the time and received the Speedy First Aid Hard Luck Award as a result of his misfortune.
Wight and Brachmann continued their side-by-side battle on the restart with Brachmann retaking the point on lap 37. Meanwhile, Sheppard raced to third behind the top two. Sheppard and Wight exchanged the second spot over the next four laps before Sheppard eventually emerged with the position just prior to a lap 44 yellow. It was on the ensuing restart with 49 laps complete that Sheppard used the inside lane position, after Brachmann chose to restart in the high groove, to take the lead and pace the final 75 laps for the victory.
“We had a good car, but I think that guy is superhuman,” Brachmann said of Sheppard following the finish. “He doesn’t make mistakes. I made a mistake on that restart, caught that hole going into (turn) three and it was enough to let him get by me. Then it was just chasing after that and hoping that he’d make a mistake, but that ain’t going to happen.”
Sheppard had to hold off Brachmann throughout a pair of restarts with 10 and nine laps to go and was quick to credit the Sanborn, NY driver for his strong drive.
“Chad was very good tonight,” Sheppard said. “I first got into second and I said ‘man, I don’t know if we’ve got anything for him tonight‘. I snuck by him on the restart and he was probably just as good as we were. If I didn’t get by him there, who knows, I may have never got by him.”
For Brachmann, it was his second top-five finish with the Super DIRTcar Series this season in as many starts, but it was his first race with Big-Block power under the hood of the No.3.
“My dad put his heart and soul into this Big-Block program, so I’m glad to come out here and run halfway decent,” Brachmann said. “Will see what the rest of the year brings for us for Big-Block Racing.”
Behind the furious battle for the lead was Pat Ward, who earned the KSE Hard Charger award by driving from 13th to complete the podium in third. Ward methodically picked his way through the front-runners in the second half of the race to continue his strong string of runs.
“The car was really good,” Ward stated. “I seemed to be getting through that hole in (turn) one better than anybody else, except for maybe Matt. They would slide up and I could just stick it in there and go, so the car was good.”
Decker earned a fourth-place finish, his eighth top-five result in 15 Series starts this season. Wight rounded out the top-five in his No.99L.
Billy Whittaker started the night with his first career Super DIRTcar Series Fast Time Award and followed it up with a heat win. Billy Decker and Tim Fuller also earned heat race victories. Ward earned the KSE Hard Charger award by advancing from 13th to 3rd. Stewart Friesen claimed the Speedy First Air Hard Luck Award after he dropped out while running in the top-10.
The Super DIRTcar Series returns to action on Thursday, August 31 at Lebanon-Valley Speedway in West Lebanon, NY for Mr. DIRT Track USA. For additional event information, visit https://www.lebanonvalley.com/lvs-home.
Ohsweken Speedway Notebook
Feature (75 Laps) – 1. 9s-Mat Sheppard (12); 2. 3-Chad Brachmann (2); 3. 42p-Pat Ward (13); 4. 91-Billy Decker (3); 5. 99L-Larry Wight (1); 6. 6h-Max McLaughlin (7); 7. 25r-Erick Rudoph (17); 8. 19-Tim Fuller (6); 9. 43-Keith Flach (19); 10. 21a-Peter Britten (10); 11. 20-Brett Hearn (9); 12. 109-Billy Whittaker (5); 13. 98h-Jimmy Phelps (4); 14. 37s-Tommy Flannigan (24); 15. 22-Brandon Walters (22); 16. 7m-Mike Maresca (25); 17. 96-Fred Carleton (23); 18. 88-Shayne Pierce (20); 19. R70-Ryan Arbuthnot (15); 20. 71-Mike Bowman (16); 21. 66x-Carey Terrance (14); 22. 08-Mark D’Ilario (18); 23. 11s-Steve Lewis Jr. (21); 24. 44-Stewart Friesen (11); 25. 6m-Mat Williamson (8)

For complete results from the Triple Crown Showdown at Ohsweken Speedway, click here.