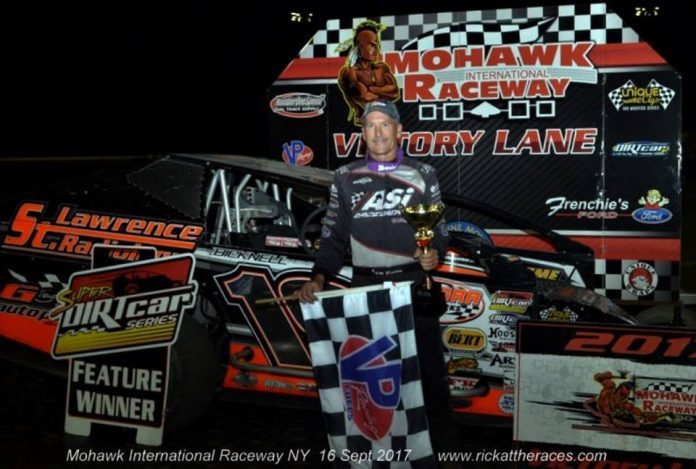 AWKWASANE, NY –  While Mohawk International Raceway regulars showed the way early in the 100-lap event, it was Super DIRTcar Series regular, Tim Fuller that was able to get by Billy Dunn on Lap 60 en route to his first Series victory of 2017.

“We gambled before tonight to see if we wanted to bring the big or small block and we decided on the small block,” said the 2017 track champion at Mohawk. “I have been struggling on the Series this season and being able to get a win with a W-16 [motor] in the car, that’s cool” added Fuller who claimed his first win on the Super DIRTcar Series this season.

A pretty solid Mohawk Nationals for Billy Dunn after securing his second consecutive second-place finish in a row after being runner up to Steve Bernard in the 358 race at Mowhawk on Friday, “I tried hard at the end but still second is pretty good,’’ said Dunn who is already gearing up for NAPA Super DIRT Week at Oswego Speedway on Oct. 1-8,2017. “When I finished second here the last time, I went on to win the big one!”

Ryan Arbuthnot rounded out the podium at Mohawk, “You always want to win but being able to finish third to these two guys it’s fun, I have been fast all year long here at Mohawk!” said Arbuthnot.

Jimmy Phelps and Ryan Arbuthnot started on the front row but Phelps took the early lead over Arbuthnot with Billy Dunn trailing in third. Arbuthnot challenged Phelps for the lead and took over the top on lap 2 with Dunn slipping by Phelps for second taking second on the following lap.

Mike Bowman collected an infield tire bringing out the first caution on lap 9.

Arbuthnot out front was challenged by Dunn on the restart as Tim Fuller and Steve Bernard were working their way into contention running inside the top four. Fuller who was fast on the bottom worked his way by Dunn for second with 17 laps completed.

Arbuthnot had a three-car length lead over Dunn, Fuller and Bernard on lap 20. The leaders entered into heavy traffic giving Dunn an opportunity to take the lead over from Arbuthnot as the top 4 were in an incredible battle for the top spot.

Traffic was a challenge for the leaders as Dunn and Fuller exchanged the lead back and forth for a few laps as the Feature reached the halfway point with Bernard, Arbuthnot and Matt Sheppard running in the top 5.

Fuller took the lead from Dunn and quickly gained a full straightway lead over second with 60 laps in the books.

Sheppard used the traffic to his advantage and took fourth from Bernard on lap 77. Bernard faded a bit as Phelps took fifth with less than 20 to go.

The bottom lane started to work for everyone as Tim Fuller was in control with 10 laps to go.

Tim Fuller led the final laps to win his first Super DIRTcar Series in 2017 over Dunn and Arbuthnot.

The Super DIRTcar Series will complete a busy weekend tomorrow by visiting the Cornwall Motor Speedway.