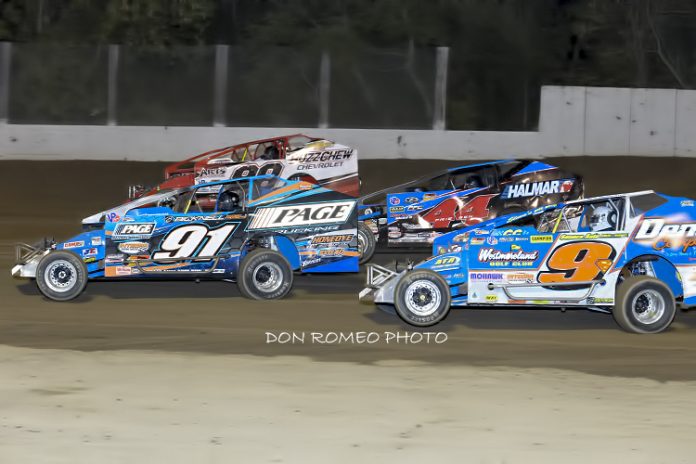 CONCORD, NC – All dirt roads lead to Charlotte for the Textron Off Road World Finals, but the road to the championship is very muddy for the Super DIRTcar Series. Among the three series in action at The Dirt Track at Charlotte Motor Speedway, the Super DIRTcar Series has the closest points battle. Two veteran competitors, Matt Sheppard and Billy Decker are separated by a mere 30 points, but only one will be standing on the top step at the conclusion of the World Finals weekend on Nov. 2-4.

While the championship battle in the Super DIRTcar Series will take center stage, and rightfully so, there is one more storyline to watch out for. Rewind to the 2016 World Finals: Matt Sheppard came into the weekend at Charlotte needing just one win to claim the most wins in a Super DIRTcar Series season. Sheppard broke the ceiling on the record by sweeping the two final events, setting the record for 12 wins in a single season.

Now fast-forward one year: Sheppard has the same opportunity, this time to break his own record. But getting to this point wasn’t an easy task. Since July 25, the Waterloo, NY driver has picked up 10 Series victories out of a possible 15 races, including his second-ever NAPA Super DIRT Week win during the the Billy Whittaker Cars 200 at Oswego Speedway, where he walked away with a $50,000 payday.

As the Series enters the final weekend of the season, Sheppard has 11 wins on the 2017 season. If Sheppard can repeat last year’s performance by sweeping the Textron Off Roads World Finals, the 35-year-old driver will raise the record wins in a season to 13 – one better than the previous record that he set last year. On top of that, if Sheppard can pull off this scenario, he will do so with two less starts after serving a two-race suspension in early July.

To give some perspective on the hole that Sheppard had to dig out of, following the Series race at Sharon Speedway on July 20, Sheppard was as low as ninth in the Championship Point Standings, and a whopping 185 points behind the leader. Tallying a 66 percent win total since July 25, Sheppard’s hard work during hot summer months paid off with a victory at NAPA Super DIRT Week, regaining the points lead from three-time Super DIRTcar Series Champion Decker, who finished a dismal 16th-place in the Billy Whittaker Cars 200.

Exiting NAPA Super DIRT Week, Decker was behind Sheppard by 46 points, but the Unadilla, NY driver wasn’t going down without a fight. The following week at Brockville Ontario Speedway, Decker made a late-race pass en route to his fourth victory of the 2017 season, closing the points gap to just 30 points as the Series enters the final weekend of competition at the World Finals in North Carolina.

A 30-point gap could be as little as a couple positions on the the track. With three nights of competition at The Dirt Track at Charlotte Motor Speedway, the battle between the pair is sure to be fierce.