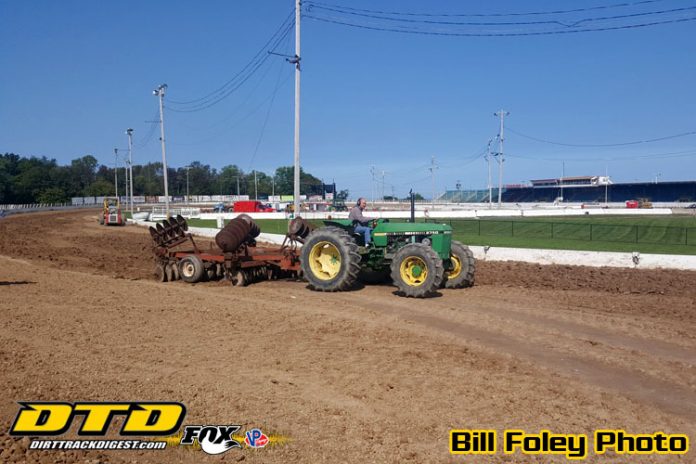 OSWEGO, NY – Work has officially begun to make the 47th annual NAPA Auto Parts Super DIRT Week better than ever. With continued support from New York State through its I Love NY campaign, DIRTcar Racing is enhancing the camping experience at the historic Oswego Speedway this year by upgrading the roadways.

“We are committed to engaging the support of New York to enhance Super DIRT Week for everyone, racers and fans alike,” said DIRTcar Racing CEO Brian Carter. “Building on the success of the racing last year, this year’s focus is to improve the camping experience for the fans.”

With just 47 days until the best Big-Block, 358 Mod, Sportsman and Pro Stock drivers in the country take the 0.625-mile oval, crews have just begun laying out new roadways around the campgrounds of Oswego Speedway and improving access to and around the green and orange lots.

On September 10, 600 truckloads of clay will begin covering the speedway for its annual transformation from Steel Palace to Dirt Palace. Transformation of the asphalt oval into a dirt track will begin as soon as the Budweiser International Classic event and the Oswego Speedway Bacon Festival are complete.

After last year’s success, the same track prep crew will take chage of laying down the dirt and prepping the track to achieve optimal racing conditions. Larry Fink of DIRTcar and Eric Kingsley of Gypsum Express will lead the track effort to lay and compact the material, preparing the track over the three weeks leading into the event.

Albany Street, which runs parallel to the front-stretch of the Oswego Speedway, will be closed to traffic during NAPA Super DIRT Week once again to make room for the event and team merchandise vendors, concessions, and sponsor displays.

NAPA Super DIRT Week will kick off with early parking for campers at Oswego Speedway on Sunday, September 30. Early Bird tech inspection for all classes and competitors starts on Monday, October 1. On-track activities will begin shortly after the procession of cars through the streets of Oswego on Wednesday, October 3 at roughly 12 p.m.