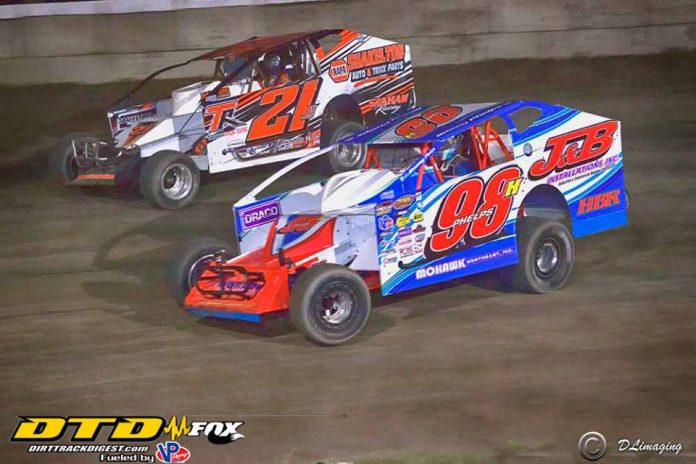 SAINT-MARCEL-DE-RECHELIEU, QUE  – HBR Motorsports veteran driver Jimmy Phelps stole his second win of the season with a late-race pass on defending Champion Matt Sheppard at Le RPM Speedway. After starting eleventh, Phelps picked his way to the front with precision moves and calculated risks. It seemed as though Sheppard would hold him off, but on a restart, Phelps went low and came out ahead of the no. 9s going down the backstretch. For the remaining laps, Phelps made his Modified very wide to prevent the counter attack. Fellow sixth row starter Danny Johnson also had a strong charge to the front and finished in second place. Defending Series Championship Matt Sheppard lead the most laps, but he could not match Phelps’ determination in getting to the front.

Two young guns aiming for their first Super DIRTcar Series Championships started on the front row for the 100-lap event. Max McLaughlin started on the pole, while Erick Rudolph took the start on the outside of row one. Rudolph currently sits second in overall Championship points and McLaughlin rides in third. As it would turn out, neither would be in Championship form on the tricky Le RPM Speedway. McLaughlin immediately lost the lead to Rudolph and faded deep into the top 10. After taking the lead, Rudolph was soon swallowed up by Matt Sheppard, who looked to have the car to beat.

From then on Matt Sheppard kept the field in check on long green-flag runs. Unfortunately for Sheppard, his car needed a few laps to come alive and a lap 90 caution flag resulted in a restart he could not recover from.

“I just wasn’t that good after cautions. It took me a few laps to get rolling. I feel like we were rolling pretty good there before that lap 90 caution. Every time we go green I felt like it was on ice for two or three laps and unfortunately that was enough for Jimmy to get by me.”

Sheppard defended against charges from Steve Bernard and Danny Johnson, but failed to hold off Jimmy Phelps. Phelps was proud to get a win at Le RPM Speedway but even he knows there is room for improvement: “One thing I don’t think I did as good as them was run the middle to the top, but I could get a good run on the bottom in turns one and two. We were just really fortunate to make some really good moves. We didn’t feel really that good early and made a bunch of changes. We made some shock changes and set-up changes and tire changes. The guys worked their tails off over there. It’s good to finally get a win here. We had podiums both years and it seems like we always played bridesmaid so it feels good to finally get one.”


Danny Johnson drove all the way to the front from the 12th starting spot, right along side race winner Jimmy Phelps. Johnson has had great finishes since jumping back into a Troyer chassis and racing for Ray Graham. Despite the strong run, Danny Johnson is never satisfied with anything but a win. “It was really great. We came up a little bit short today, but I’m really proud of my team for giving us the opportunity to come here today and run as good as we did.”

Tomorrow the Super DIRTcar Series travels back to Autodrome Drummond for their second round or racing this year.