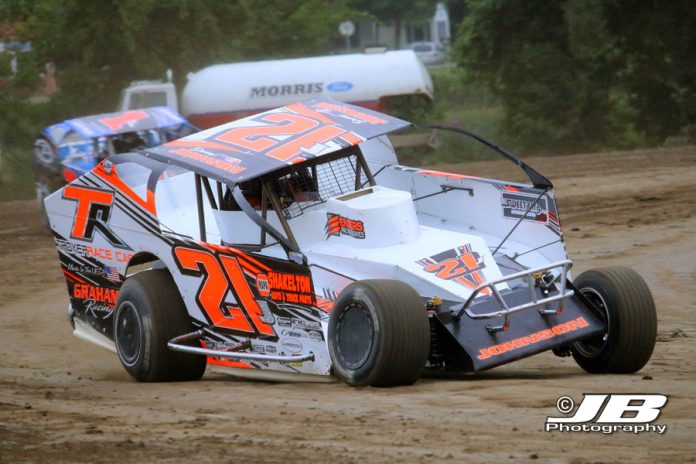 DRUMMONDVILLE, QUE – Danny Johnson marched through the top third of the field to take the win at Autodrome Drummond ahead of local favorites Mathieu Boisvert and driver/promoter Yan Bussiere. For the second night in a row, the winner came from the sixth row, specifically 11th place. Unfortunately, Johnson’s teammate Peter Britten came up light on the scales in post-race inspection and was forced to surrender his second-place finish. Max McLaughlin picked up fourth position after starting on the pole.

Max McLaughlin redrew the pole position for the second night in a row and brought the field to green in front of another massive Drummondville crowd. Outside pole-sitter Peter Britten was quickest around the top of the track right off the bat and passed McLaughlin for the lead on lap three with authority. After that, Britten put his foot through the firewall and gapped the field by a considerable distance. Lapped traffic came into play as well and the top five bunched up. Yan Bussiere got around McLaughlin as well. Steve Bernard smelled blood in the water and moved in for the kill.

On lap 15, the Billy Whitaker Cars & Trux Fast-Time Award winner Steve Bernard slowed on the track coming out of turn three to bring out the caution flag. The team diagnosed a rear end problem but were unable to make the repairs in time, forcing Bernard to retire from the race.

By lap 38, Danny Johnson had made his way up into the top three. Yan Bussiere cracked the front stretch wall and gave Johnson the opportunity to take second place. Johnson began to mount his charge on teammate Britten for the lead, but just before the halfway, a flat tire caused a dangerous accident on the front stretch. Erick Rudolph slowed down on the front stretch due to a flat tire. Matt Sheppard was just behind Rudolph and did his best to miss the stricken no. 25R. Even ‘Super’ Matt Sheppard could not avoid contact with Rudolph.

Sheppard swerved but clipped Rudolph, which sent the no. 9S into a 180-degree spin. With nowhere to go, Jimmy Phelps slammed into Sheppard, sending the car into a ditch in the infield. All drivers were OK. The rest of the race went relatively incident free, as the quickest line formed on the top and the field strung out. Danny Johnson held on to win his third Super DIRTcar Series race in 2018.


In Victory Lane Johnson said, “It’s a long-ways up here for everybody. It’ll really be great to go home with a victory. I can’t thank my sponsors enough, like Shackleton Auto Parts. I love the fans here!”

Max McLaughlin had a strong finish after a difficult evening at Le RPM Speedway. HBR Motorsports have been trying something new that does not seem to suit McLaughlin early in the race. He noted, “We trying something new right now. We were just playing around with some new stuff, testing some stuff. I just need to be better on the front side of runs. We were right there at the end but the track rubbered up and you can’t really pass when that happens. A solid fourth place finish ain’t too bad.”

Runner-up Mathieu Boisvert was ecstatic about his second-place finish. In Victory Lane he was stormed by friends and family to celebrate his career best Super DIRTcar Series finish. Boisvert comments on his huge night, “It took some teamwork. Obviously, I had some good restarts from lap one. I came close when Matt Sheppard spun and collected Phelps. All in all a super night!”