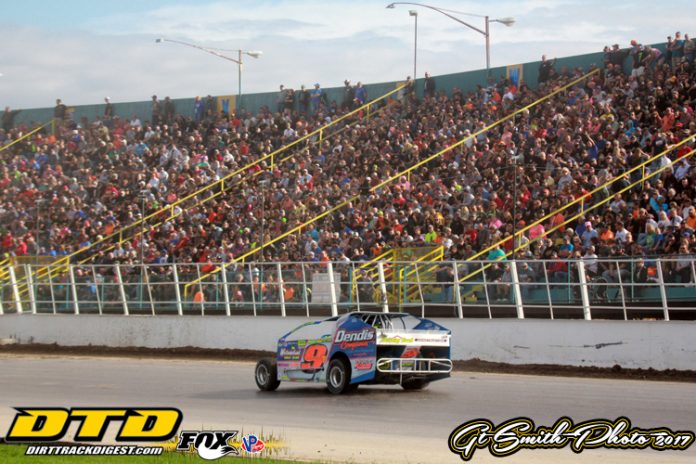 CONCORD, NC – NAPA Auto Parts Super DIRT Week is an event like no other, culminating with one of the most coveted races in all of dirt motorsports, the Billy Whittaker Cars 200. All eyes will be on Oswego Speedway from October 1-7 wanting to know who will win the Teo Pro Car Pole Award, who looks racy in practice, who will make an epic drive in the Last Chance Showdown to make the feature, and of course, who will take home the $50,000 paycheck at the end of 200 grueling laps on the 5/8-mile Oswego Speedway.

The stars and cars of the Big-Block Modifieds have battled wheel-to-wheel all season long on the road to Oswego. This year seven Super DIRTcar Series races offered a special guaranteed starter award to the winner or highest finishing driver without one. The drama and tension of NAPA Super DIRT Week started long before October 1, rather in April, May, and June as the Super DIRTcar Series set out across the Northeast and Canada.

Matt Sheppard is once again one of the favorites going into the 200. The defending Super DIRTcar Series and NAPA Auto Parts Super DIRT Week Champion is leading in points and looks poised for another Championship notch on his belt. No one will forget the last-lap pass Super Matt Sheppard made on Peter Batman Britten in 2017. It was heartbreak for Britten and triumph for Sheppard. He is a guaranteed starter this year after finishing second at Orange County Fair Speedway to Stewart Friesen, who already had a guaranteed start awarded to him. Will the no. 9s return to the Oswego Speedway Victory Lane in 2018?

With Matt Sheppard in his sites, Erick Rudolph is looking forward to having the chance to close the gap as double points are awarded for the 200-lap finale. Rudolph has had a strong, consistent year on the tour, including a victory at Weedsport Speedway in a NAPA Super DIRT Week Qualifier. A late-race wreck in turn one involving Billy Decker and others ended Rudolph’s Billy Whittaker Cars 200 chase on lap 174 last year. With two Track Championships at Ransomville Speedway and Land of Legends Raceway in 2018, Rudolph hopes to add one more Championship to the list — the biggest of his career.

Veteran Danny Johnson has raced in as many cars as he has wins in 2018. Johnson suffered a hard crash at Orange County Fair Speedway and totaled his Big-Block Modified. After borrowing a ride, Johnson has found a home with the Ray Graham team in a Troyer chassis. Since then he’s been on a tear and clawed his way up to third in the Championship Points standings with wins at Land of Legends Raceway, Airborne Park Speedway, and Autodrome Drummond.

Danny Johnson’s teammate Peter Britten is primed for redemption after losing the 200 on the last lap in 2017. Britten watched the biggest win of his career slip away on the back stretch of the 5/8-mile Oswego Speedway back stretch as Matt Sheppard got a powerful drive off of corner number 2. Britten has been inconsistent in 2018 but always shows up to NAPA Super DIRT Week prepared and focused.

Five-time NAPA Auto Parts Super DIRT Week Champion and NASCAR Camping World Truck Series standout Stewart Friesen is once again a major threat at Oswego Speedway. Friesen leads Series drivers with five wins so far in 2018. The Halmar Racing team wants to make that six with a win on Sunday, October 7. The no. 44 knocked out the competition at the Big Show X at Albany-Saratoga Speedway earlier this year to secure himself a guaranteed start in the 200.

The HBR stable of Big-Block Modifieds will once again be making a maximum attack for a Billy Whittaker Cars 200 win. Veteran driver Jimmy Phelps and young gun Max McLaughlin have put together a very good season to date and ride fourth and fifth in points, respectively. McLaughlin finished close behind Stewart Friesen at the Big Show X to earn his guaranteed start in the 200. Phelps has come close in the past and The Baldwinsville Bandit is ready to steal a Billy Whittaker Cars 200 win.

Mr. Dirt Track USA Kenny Tremont rolls into NAPA Super DIRT Week with a guaranteed start. Tremont was awarded the guarantee after cruising to victory in a thrilling 100-lap contest at the very fast clay oval of Lebanon Valley Speedway. Tremont won NAPA Super DIRT Week at the New York State Fairgrounds in 1999, and now the newly inducted DIRT Hall of Famer will look to add Oswego Speedway to his collection of wins.

The most recent guaranteed starter is Tim Fuller, who captured the win at Fonda Speedway in “The Jack” tribute race to the great Jack Johnson. Fuller has had a difficult year despite winning the Mohawk Int’l Raceway Track Championship and setting a single season win record with 10 at the northern New York oval. He initially planned to follow the Series in 2018, but suffered manpower setbacks at the race shop.

Never count out John Wight’s Gypsum Racing duo Pat Ward and Larry Wight. The Genoa Giant Pat Ward nearly won the Duel at the Demon Series race at Brewerton this year, but Matt Sheppard made a daring late-race pass for the victory. Teammate Lightning Larry Wight is a natural talent with a lot of raw speed. He’s now raced for enough years that his experience can temper his high, wide, and handsome style into a focused effort that could amount to NAPA Super DIRT Week glory in 2018. Wight finished on the podium in 2017 behind Sheppard and Britten.

An impressive list of invaders have made their intentions known to steal the win from the Super DIRTcar Series regulars. Ryan Watt, Billy Pauch Jr., Rick Laubach, Ryan Godown, and JoJo Watson will take on NAPA Super DIRT Week with dreams of a long ride home with a $50,000 check in hand. Ryan Watt brings a lot of momentum into October as he was named the Bridgeport Speedway Track Champion for 2018. Billy Pauch Jr.’s family is no stranger to NAPA Super DIRT Week, but 2018 will mark the first time that Pauch Jr. will attempt to make the field.