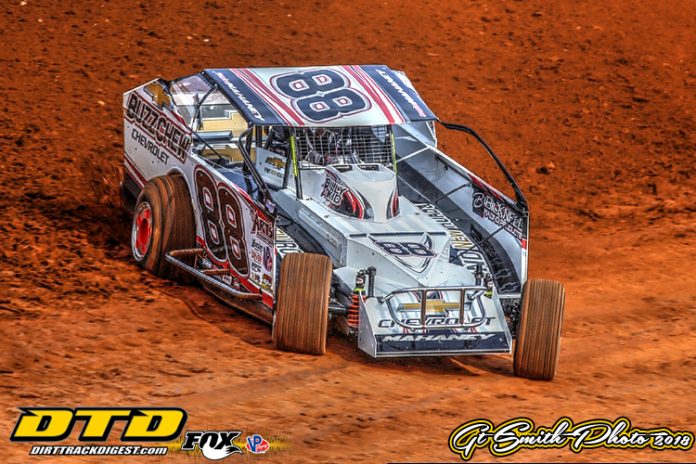 Billy Decker led the opening lap of the opening heat, but was instantly slowed by a yellow flag. On the lap one restart, Matt Sheppard shot a slider on Decker and grabbed the top spot away. The points leader led the rest of the distance to grab the heat win, but Decker kept pressure throughout and trailed Sheppard by a car length at the finish. Josh Hohenforst, Mat Williamson, and Steve Bernard completed the top five.

Keith Flach was slated to start on pole for Friday’s second heat, but a motor change send him to the tail. This handed the pole to Max McLaughlin, who jumped out in front at the drop of the green over Pat Ward. McLaughlin and Ward separated themselves over the battle for third between Danny Johnson and Tim Fuller, with McLaughlin keeping his foot to the floor and grabbing the win. Ward, Johnson, and Fuller trailed behind, with Flach rebounding for the fifth and final transfer spot.

Mike Mahaney set the pace early in the third heat, quickly putting space between himself and second-place Jessey Mueller. Peter Britten and Erick Rudolph fought for third, but their battle halted as the yellow waived for Chad Jeseo stopping on lap five. Up front, Mahaney cruised to the win, but second in points Rudolph got an awful restart, slipping back to fifth. Mueller, Britten, Carey Terrance, and Rudolph qualified through the heat, with Rudolph barely beating Tim McCreadie to the line for the final spot.

Brett Hearn used the pole starting spot to his advantage, instantly building up a big lead at the start of the fourth heat. For the entirety of the event, Hearn went unchallenged en route to the eight-lap win. Yan Bussiere rode to second, while Chris Hile held off Jimmy Phelps for third. At the end of the race, Tyler Siri slipped by Phelps to grab fourth, with Phelps claiming the fifth and final transfer spot.

Billy Decker, Matt Sheppard, Mike Mahaney, and Keith Flach scored the four heat victories for Saturday’s portion of the World Finals, locking themselves into premier starting spots for the season finale. Just like earlier in the night, Billy Decker led the opening lap of the first heat. Unlike earlier, Decker didn’t lose the lead on lap two, instead, second-place Erick Rudolph slowed with mechanical issues. With his closest competition headed pitside, Decker was long gone en route to the win, but Chris Hile went up in smoke with a lap to go to bring out the yellow. Decker wasn’t phased, cruising to the win over Britten, Hearn, Justin Wright, and Danny Johnson.

Matt Sheppard nosed ahead of polesitter Demetrios Drellos at the start of the second heat, but Drellos held strong on the cushion and took the lead. Once out in front, the teenager drove away from the six-time Super DIRTcar Series champion, holding the throttle to the floor for the next eight laps and scoring the heat win. Sheppard chased in second, with Justin Haers, Chad Jeseo, and Carey Terrance grabbing qualifying spots.

Mike Mahaney picked up right where he left off, as the winner of Friday heat race three darted out to the lead of Saturday heat race three. With Tim Fuller the only car capable of hanging within shouting distance of the lead, Mahaney kept it wide open to go two-for-two on the night. Fuller chased Mahaney across the line for second, while Jeremiah Shingledecker, Dave Rauscher, and Mat Williamson also snatched some qualifying spots.

Keith Flach outdueled Tim McCreadie for the lead at the start of the fourth heat race, but a lap one yellow reset the fight. On said restart, Mike Maresca slipped under McCreadie for second, as McCreadie got caught in the heavy Charlotte cushion. As McCreadie chased after Maresca, Flach was in another zip code out front, walking away to the heat win. Maresca and McCreadie finished second and third, while Friday heat winner Max McLaughlin claimed fourth, and Steve Bernard grabbed fifth. 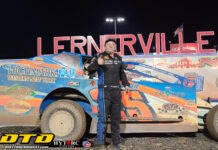 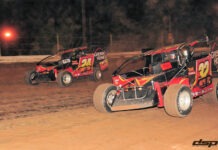 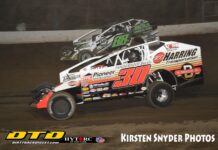