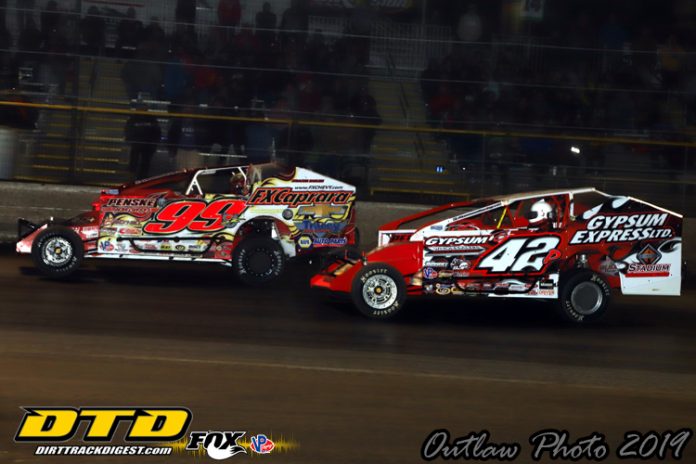 BARBERVILLE, FL – Larry Wight picked up an exciting win on Friday night at the Volusia Speedway Park over Matt Sheppard and Pat Ward.  Wight used the top of the speedway to come from his 9th place starting position to take the lead on lap 21 and never looked back, claiming his first “little” gator at the DIRTcar Nationals.

“At the beginning, we weren’t really sure what we were going to have,” Wight said. “Dave Reedy from Penske Shocks came over and we played around with the shocks tonight, and I think we finally found the happy medium for it. There was enough of a cushion to where you could really throw the car in hard, and as long as you could keep it turned to turn down off of turn four, you could make up a lot of ground. I saw Matt try it a couple times and shove the nose bad, but we were a little freer and made it work.”

Mat Williamson and Matt Sheppard led the field to the green for the 30-lap Super DIRTcar Series feature, with last night’s winner Sheppard grabbing the lead. The yellow waived on lap 2, as Yan Bussiere ended up backwards and Tim Fuller made hard contact. On the following restart, just like the initial start, Sheppard launched well and set sail out front.

Behind Sheppard, Pat Ward was working over Williamson for second, and high flying Larry Wight caught up to both. Ward snuck under Williamson on lap nine, with Wight close behind their battle. Once firmly in second, Ward found himself almost a straightaway behind Sheppard, but Ward had speed down low. As halfway loomed, Sheppard entered traffic and Ward started to chip away at the gap.

Sheppard was struggling with traffic, and by lap 16 Ward had cut the lead to under a second. Meanwhile, teammate Billy Decker, opening night winner, slowed with motor issues. On the lap 16 restart, Ward blasted around the top of Sheppard for the lead, and Wight went even higher and to second. Now, Sheppard was in third and under attack from Erick Rudolph, while the Gypsum teammates of Wight and Ward fought over the lead.

With ten laps to go, Wight blasted the cushion and got by Ward for the lead. Ward wasn’t going away quietly, rolling the middle and keeping Wight honest. As the teammates battled, the yellow flag halted the pace on lap 23 with Ryan Godown’s flat tire.

Wight got a good restart, and so did Sheppard, who went back to third and was pressuring Ward for second. Peter Britten was making ground up top, making it a three car gift for second. With five to go, Sheppard secured second, but was a second and a half behind Wight.

Sheppard was digging hard down low, closing the lead a little each lap. However, it was too little too late, as Larry Wight scored his first Volusia Speedway Park feature victory. Matt Sheppard chased in second, followed by Pat Ward, Peter Britten, and Erick Rudolph.

In victory lane, Wight had this to say about his 99L machine “Our car really turned on throttle,” noted Wight. “Since the first night, we haven’t been able to get the push out of it and be able to drive around the corner. Last night we were too lose, and tonight we backed up some and it was great. It’s good to finally get a little gator to put on the mantle.”

Second place finisher Matt Sheppard struggled to get his car to turn.  “I just need to figure out how to make this thing turn,” stated Sheppard. “I got ungodly tight there in the middle of the race and fell back to fourth or fifth, finally found a groove where it kind of steered and we were able to get back by some guys. Salvaged a second tonight. I was just kind of going wherever the heck the car wanted, I sure wasn’t driving it.”

With his second place finish, Sheppard now unofficially leads the points for the DIRTcar Nationals heading into tomorrows finale.