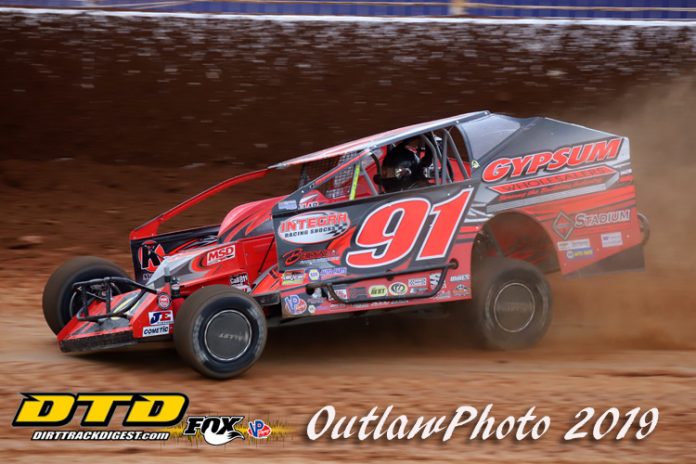 Matt Sheppard took the lead at the start of the 40-lap feature, with Billy Decker stealing second from Mat Williamson. Once in second, Decker went to war with Sheppard, pressuring him for the lead early and often. Decker took his first shot at Sheppard on lap 8, but Sheppard hung on, all while Williamson watched from a close third. With Sheppard high, Decker dropped low, leading lap 9 by a nose and securing the top spot the next time around.

Decker didn’t have any breathing room when leading, as Sheppard, Williamson, and Mike Maresca kept him honest. Heavy traffic packed the top four together, with Sheppard taking a swing at the lead at halfway, but Decker held on. At one point, the top four ran two-by-two, with Decker and Sheppard door-to-door, and Williamson side-by-side with Maresca. Keep in mind, if Sheppard won, Williamson could not let Maresca by, otherwise Sheppard would win the championship.

On lap 22, Sheppard blasted the top of turns three and four, getting the lead back from Decker. Williamson was fighting for his life close behind, but Decker wasn’t done yet. A top-to-bottom move on lap 26 sent Decker back to the front, with Sheppard now fending off Williamson. Soon after, Sheppard grabbed the cushion too hard, giving second to Williamson. With ten laps remaining, Maresca also slid by Sheppard, putting Sheppard back to fourth.

Up front, Decker was slowly pulling away, while Williamson and Maresca continued their long battle. However, Williamson and Maresca were now battling for second, as Sheppard was losing touch of the top three. Williamson eventually broke free from the rim-riding Maresca as the track started to take a hint of rubber, but nobody was touching Decker. After 40 intense laps, Billy Decker took his first points-paying Super DIRTcar Series win of the season to go along with his season-opening win at Volusia. Finishing second was the new Super DIRTcar Series champion, Mat Williamson, with Mike Maresca, Matt Sheppard, and Max McLaughlin finishing third through fifth.

Last night, Decker got damaged in a lapped-traffic incident while leading, and ultimately blew a tire. Tonight, he got revenge in the form of a win.

“This feels great, I’d like to say Charlotte has been a pain in my side lately, but my real opinion of it is even worse than that,” Decker noted. “One got away from us last night, but this is a product of all the hard work at LJL Racing. Our car was real torn up last night, but we got it back together and it was perfect. What a great racecar, it feels awesome to finally get a win here, we got our heads down last night and came out swinging today.”

This was Williamson’s best second place finish ever. It capped a storybook season with his first Super DIRTcar Series champion.

“I didn’t really know what to think when Matt got back by Billy,” Williamson said. “I just had to keep my cool, but man that was hard. I know second is supposed to suck, but I’ll take it any day with the reward of winning the title. It’s unreal, I can’t even control my emotions.”

Maresca has been fast lately, and continued his pace at Charlotte. A podium here is Maresca’s best at the track.

“I got rolling really good up top, but hit the curb too hard and popped the right rear,” noted Maresca. “Racing the championship contenders was really hard, I feel bad enough about it. I just hope to keep running good and clean and earn their respect, its tough when you know they have so much on the line.”