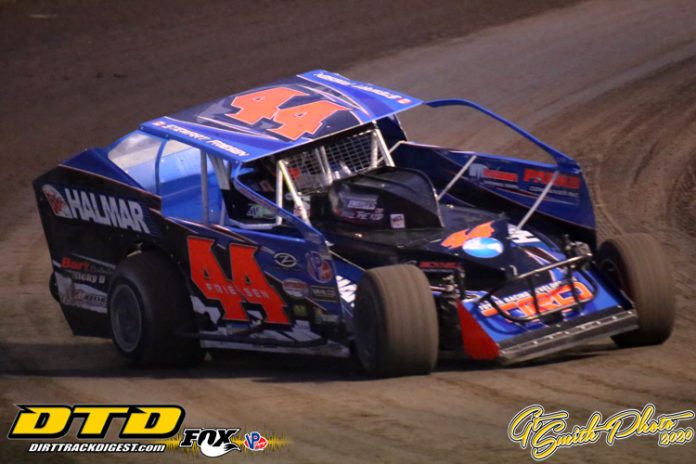 What a difference 24 hours makes.

Stewart Friesen turned a 17.606 on the world’s fastest half-mile at Volusia on Wednesday night to outdistance 34 other Super DIRTcar big-block Modifieds.

On night one he tied for quick time of his group with a 17.987 with Matt Sheppard, started deep in the field and put on a spectacular drive to finish fourth in the 30-lap feature.

Wednesday night hot laps and time trials were one in the same as groups went out for three laps on the track which covered both areas.

Friesen told DTD, “Tonight was a little better. I think we were more prepared for the surface. It was choppy a bit in turn one, but not as bad as last night. The fast time puts you in a good position for the heats.”

Continuing he noted, “You need to get track position here. It is very important. I hope we can just keep it clean tonight and have a good redraw.”

Group fast timers included Mat Williamson 17.932 for the first group while Erick Rudolph was clocked at 18.127 in his group and Andy Bachetti wrapped it up with a 17.842.

The only driver who didn’t return for night two was Danny Johnson as the Outlaw Racing team, owned by Tyler Siri, had a rod drop in the motor on Tuesday night.