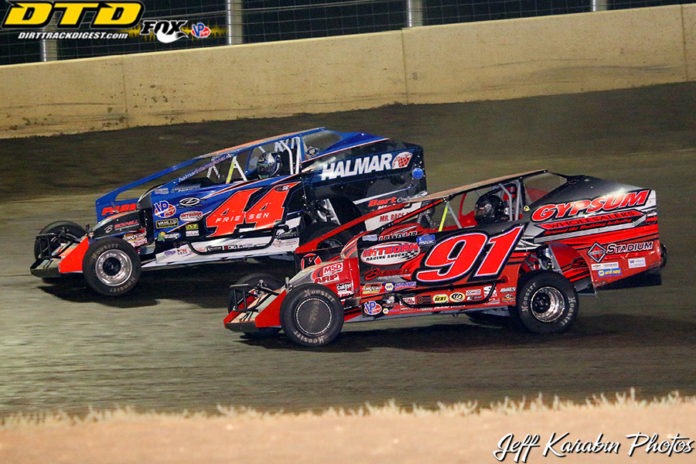 Friesen scored yet another victory on Wednesday night at the newly reconfigured Bridgeport Motorsports Park in the King of the Big-Blocks Super DIRTcar Series opener.

“This one’s for Danny (Serrano),” stated an emotional Friesen in victory lane after scoring the $7,500 win. “This was his passion. He did a lot of work over the winter. Thank you to everyone for supporting it. He was a good friend of mine and he’ll be missed. He’ll be proud of us for winning this show I hope.”

The feature started with a battle between teammates.  Larry Wight and Billy Decker set the pace in the opening laps of the 100-lap affair. Wight got the drop on Decker at the green with the pair racing away from their starting positions alongside one another on the front row.

Wight spread the distance early until he found himself in slower traffic by the 10th circuit. Once in traffic, Decker closed the gap. Decker challenged him every step of the way before assuming the lead 10 laps later.

Decker’s lead was negated when he slowed with a flat tire on lap 24 handing the lead spot back to his teammate Wight. Decker’s flat also moved Friesen up to the third position in line after he started ninth.

Friesen took full advantage of the restart to pass both Ryan Godown and Wight for the top position before another caution was necessary for a slowing Mike Mahaney and Matt Sheppard who both had flat tires.

The ensuing restart on lap 36 was all Friesen needed as he bolted away from the field with Wight now forced to fall in line in the runner-up spot. From there, Wight fell back into the to clutches of Billy Pauch Jr., who promptly made the pass for second a few laps later.

Friesen showed unmatched speed as he controlled the action. He opened the distance to nearly four seconds before another yellow just before halfway erased his advantage.

As lap 50 clicked off on the lap counter, Friesen maintained his dominance over Pauch Jr., and Godown. As they raced hard for second, Friesen was able to again pull out to a sizeable lead over the field. Two laps later Wight watched his chances of winning diminish as his No. 99L slowed with a flat tire.

There were 58 laps complete when everyone got back on the gas for the green. Friesen led as Sheppard appeared inside the top five for the first time after pitting for fresh rubber.  Sheppard wasn’t happy there, he took just five laps to make his way up to second to mount his challenge to Friesen.

Friesen and Sheppard began a classic duel at the front. Friesen was able to keep Sheppard behind him through multiple restarts and green flag runs. The two were glued together.  Sheppard showed the nose multiple times on Friesen, but he just couldn’t complete the pass.

Three laps later, Sheppard was not going to be denied. He drove by Friesen at the exit of turn two and got the top spot. It didn’t last. Sheppard drove into turn three and something let go on his car causing him to slow to bring out the caution. This gave the race lead back to Friesen.

“I figured the tire was about shot by then,” stated Friesen. “I was starting to skate pretty good. I was pretty good in three and four, but I wasn’t sure where to be in one and two. I didn’t know where I should be. I tried going to the bottom and Matt got me on the top. I don’t know what happened to him.”

Friesen received one final challenge in the final laps as Decker, who also had a fresher tire, worked his way back up to second at this point. Decker applied as much pressure as he could and nearly pulled even off of turn four as they raced to the checkered flag.

As they crossed the line it was Friesen’s Bicknell taking the win by a half car-length over Decker. The ‘Franklin Flyer’ threw everything he had at Friesen. He came up a bit short at the flag after recovering from an early race flat tire.

“Sometimes when that happens you hope you are the first one in for another tire because sometimes that wins the race,” mentioned Decker. “By the looks of Stewart’s tire, it wasn’t that far off, but he was just so smooth driving in on the right front. Our car was really good. I’m happy with our performance.”

Jimmy Phelps ran a steady race to bring his HBR ride home in the third position. Phelps worked his way all the way up through the field from the 19th spot in the order to finish just behind Decker and Friesen. Phelps was pleased considering there wasn’t much left of his well-worn Hoosier Tire.

“I think the car was a lot better than me all night,” said Phelps of his Bicknell. “I qualified like crap. I don’t think I was on the right part of the track. That put us behind. We just went a little harder on tire than most. We fired halfway decent. We were passing guys on the bottom and got up to the top 10 there and then the topped locked down. A bunch of guys got by me and I knew I needed to be up there. We clawed our way back and attrition took over. Honestly it was a blessing I got stuck on the bottom because the right rear didn’t have another five laps in it.”

Andy Bachetti worked up from 24th to finish in fourth while Michael Maresca advanced from 14th to complete the top five.