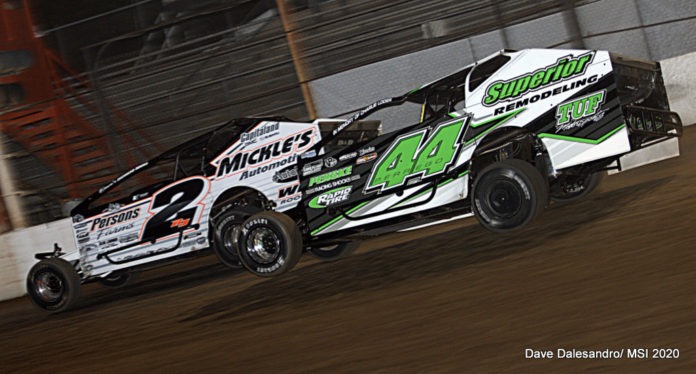 MALTA, NY – Albany-Saratoga Speedway played host to the opening round of OktoberFAST, with Ronnie Johnson and Anthony Perrego dueling nearly the entire feature for the $7,500 victory. With a last-minute slider, it was Perrego getting the best of Johnson to claim his first Super DIRTcar Series win. 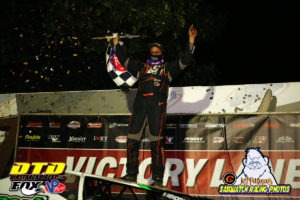 Johnson led Perrego and Matt Delorenzo through the opening stages of the first 60-lap event of the week, with the frontrunners finding comfort in their positions early on. Johnson initially skated away to a solid gap, but slowly, Perrego and Delorenzo began to inch in. By lap 20, the leaders had made their way into traffic, and Perrego had cut the lead to under a second. While Perrego closed in down low, Delorenzo also reeled in the top two on the cushion, with the top three separated by under a second by lap 25.

Lap 25 saw the first yellow of the event, with the front trio resuming their battle when racing resumed. Another quick yellow reset the field, this allowing Albany-Saratoga track champion Mike Mahaney to snag third from Delorenzo. Delorenzo’s good run was halted by the outside wall on lap 37, drawing a third and final yellow on the event.

On the restart, Kenny Tremont went after Mahaney, grabbing third for the time being. With the top two locked together, Tremont and Mahaney did the same, as the top four now found themselves within a second by lap 45. With ten to go, things only tightened up, as the Gypsum teammates of Billy Decker and Larry Wight joined the party, pressuring Tremont and Mahaney for third and fourth. As Mahaney got momentarily knocked back to fifth, the top six were separated by less than a second and a half with under ten laps remaining. Up front, Perrego was as low as he could go, hovering within a quarter second of Johnson every time by the finish line.

With a handful remaining, Mahaney got rolling on the bottom and clawed back to third. Also gaining ground on the bottom was Perrego, drawing even with Johnson at the two-to-go signal. Down the backstretch, Perrego nosed out in front, throwing a slider coming to the white flag. The slider stuck, and Johnson tried to cross over, but got hung in the middle as Mahaney stuck a nose down low. With the checkered waiving, it was Perrego grabbing his first Super DIRTcar Series win over Mahaney, Johnson, Tremont, and Wight.

“We were really good, but had no choice but to follow him around the top early on,” Perrego said. “I migrated low just looking for something, but had to be real paitent down 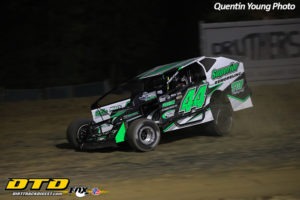 there. I finally found what I needed in the final five laps and got it done, we got some heat in the right rear tire and started to stick it better. Chasing Ronnie down, I kept overdriving, but I was able to keep calming myself down and keep it in the brown. It’s just awesome to get our first Series win, we had some big races get away from us last year so this means a bunch. Overall, we just had a great car tonight and it showed.”

Mike Mahaney went +9 during the feature, snagging second through the late-race battle for the win. Mahaney has been as dialed in as ever at Albany-Saratoga, claiming multiple wins and the track title in 2020.

“Anthony tossed that slider, and with those guys fighting for the top, I just had to pick the other lane,” stated Mahaney. “The cautions just didn’t fall our way early with an awful redraw, but we had a good piece and were still able to drive up through. Maybe if a couple things went different we would’ve been battling for the win, but overall this is an awesome start to our week.”

Johnson led 58.5 of 60 laps, but didn’t get the trophy or even second. While third against this quality field is strong, Johnson was still let down given the circumstances.

“That one was disappointing,” Johnson noted. “I was hitting the top good, but just kept getting more and more free as the laps wound down. I heard him and saw him poke a nose down low and I kept driving it harder, but just wasn’t sticking the way it was early on. Perrego had the chance to move around being in second, but I had to stick to my guns in the lead, just the way it is leading that long. We’re going to pick and choose where we go the rest of the week, but we got a solid package for wherever we go.”