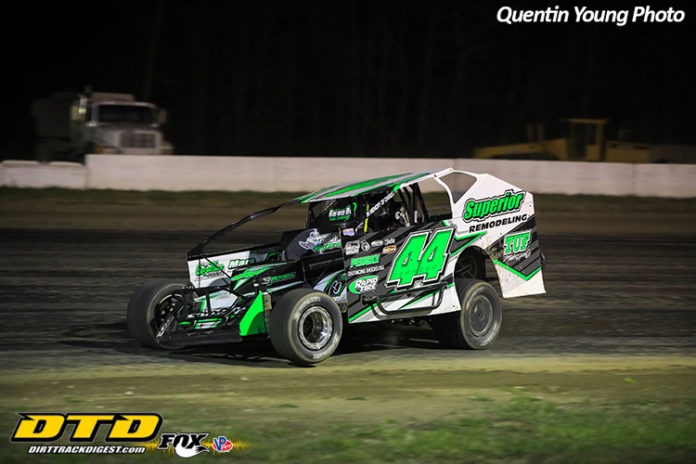 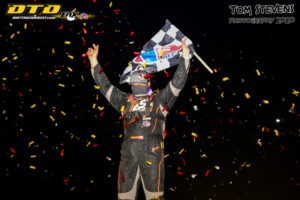 “Coming into the week, we’ve never won a Super DIRTcar Series race but to get two in one week is pretty special”, Perrego said. “Running the Small Block race, it gave us an idea what the track was going to do, and it fell into our favor”, Perrego continued.

Perrego started on the pole with “The Jet” Brett Hearn to his outside when they came for the green flag. After a pair of early cautions in the first six laps slowed the field down, Perrego would take off in the lead as Mike Maresca raced into the runner-up position. Moving up from his eighth starting position was Stewart Friesen as nearly after the lap nine restart, Friesen would enter the top five. The Halmar International #44 would then make it a three-car battle for third place by the races’ 1/3rd point, battling with Mike Mahaney, and Erick Rudolph.

Matt Sheppard pulled off the track with mechanical issues on his 9s machine on lap 19 while running inside the top 15.

The leaders would hit lap traffic prior to the halfway mark as Mike Maresca started to reel in the race leader Perrego. As the race continued to string along, everyone was fighting for the inside lane, digging their left side tires right up against the Ute tires. With Perrego well out front, Maresca was started to get reeled in by Mahaney, Rudolph, Friesen, and Billy Dunn.

Tim Sears Jr would spin in turn four on lap 51, setting up a nine-lap dash for the $7,500 payday. Maresca would “poke the nose” underneath Perrego exiting turn four but was not able to go side by side and pass Perrego. Perrego would pull away to score the win, his first at Can-Am, and second OktoberFAST win over a four-day span. Maresca followed Perrego to the line with Mahaney, Erick Rudolph, and Stewart Friesen completing the top five.

“It is good to have good momentum going into Port Royal and Eastern States coming up”, Perrego said. “The track took a lot of rubber and it reminded me a little bit of how Middletown rubbers up”, Perrego continued.

“We got to second pretty quick and rode there pretty much the whole race”, stated Maresca. “I thought I had a chance on the restarts, but we’ll take second after the week we’ve had”, Maresca added.

Mike Mahaney would be on the podium once again during OktoberFAST. “We had the best draw we had all week, and the track took rubber early”, Mahaney said. “Maresca had a nice move around me for second and I’m proud of my team for their hard work this week”, Mahaney commented. “I’m excited to go back to the Land of Legends. I raced there for a season and you never know what to expect there”, Mahaney said.

Stewart Friesen set fast time with a 20.032-second lap around “The Nasty Track of the North”, with 49 drivers taking time. Heat races were won by Friesen, Mat Williamson, Pat Ward, and Billy Dunn. The two last chance showdowns were won by Max McLaughlin and Peter Britten.