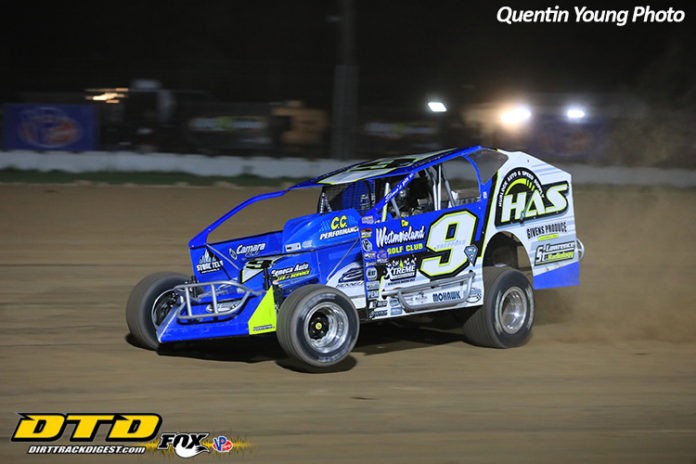 CANANDAIGUA, NY – Going into night five of DIRTcar Racing’s OktoberFAST at the Land of Legends Raceway in Canandaigua on Saturday night, Waterloo’s Matt Sheppard has had a week to forget. With an outside front-row starting position, the nine-time track champion found himself in a familiar place after the 60-lap event for the Big-Block Modified Super DIRTcar Series, victory lane.

Sheppard and Pat Ward led the field to the green flag with Sheppard using the outside groove to take off into the lead. Fourth place starter Mike Mahaney also used the outside line to take over second on the takeoff lap as well. After a pair of early race cautions, the field started to string themselves around the Canandaigua half mile.

“Mad Max” Max McLaughlin worked his way by Ward to move into third place on lap 17 and by lap 26, was starting to challenge Mahaney for second. Erick Rudolph would start to enter the picture on lap 34, as the 19th place starter from Ransomville was outside the top five and on lap 40, would enter the top five and made a challenge for third place.

With 17 laps remaining, the yellow lights would come on for a fifth time on as Stewart Friesen slowed on the backstretch and Justin Wright had nowhere to go and made hard contact with Friesen. Friesen broke a right rear brake line and lost the brakes of the Halmar International entry.

On the lap 43 restart, Rudolph would move into the top three and would challenge Mahaney for second, as Sheppard continued to show the way. Mat Williamson battled back into the podium on lap 46 and was able to get around Mahaney with five laps remaining for the second position.

Sheppard would go on to score the win, his first of OktoberFAST. Williamson finished in second and was followed to the line by Mahaney, Rudolph, and Billy Decker. Max McLaughlin, Larry Wight, Tim Fuller, Rocky Warner and Jimmy Phelps would complete the top ten.

“It felt great tonight,” stated race winner Matt Sheppard “After the last few nights, I was wondering if I remembered how to race a racecar.  Everything was spot on tonight. I committed myself to the top and when I moved to the bottom, the car felt good there as well.”

“I was vocal last night on how the tracks have been the last couple of nights and tonight, hopefully, the fans enjoyed the show and sticking it out with the delays,” commented runner-up finisher Mat Williamson. “Looking forward to Weedsport tomorrow, that track is always racey. The car was a 7 out of 10. I must thank all my crew. They worked hard all week, especially today.”

“We’ve had a fast car all week,” stated Mahaney.  “Tonight, the track was heavier than I expected it to be. We’ve been consistent all week too and have had some good draws and just need that to continue.  I’m looking forward to running Weedsport tomorrow. I won my first Big-Block race there and hope we can get another win there tomorrow night.”

The six-days known as OktoberFAST will come to a close on Sunday night at “The Birthplace of DIRTcar Northeast”, the historic Weedsport Speedway for a 75-lap affair for the mighty Modifieds.