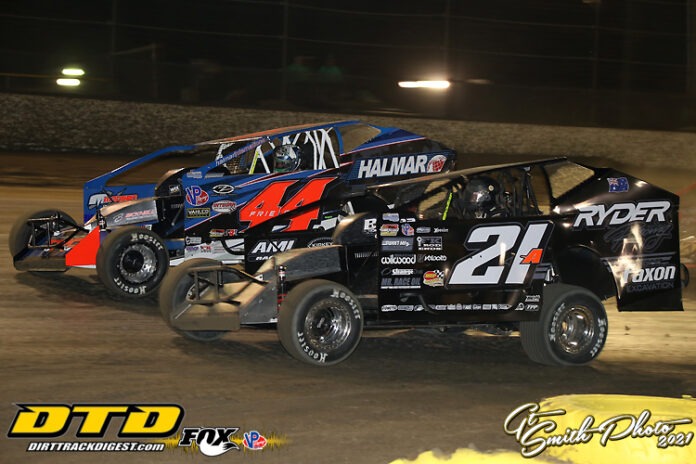 Friesen grabbed the lead from Jimmy Phelps at the start of the 30-lap feature, with Britten battling Phelps for second in the early stages. Britten stole the spot from Phelps on lap five, then quickly closed in on Friesen as the leaders hit traffic. Britten reached the back of Friesen, but a yellow on lap nine stopped Britten’s momentum.

Friesen held tough on the ensuing restart, but another restart on lap 12 saw Britten get a great launch and take the lead. At the same time, Friesen shoved his nose up the track and slid back to fourth, but the yellow waived for a wreck at the back of the field. This meant Friesen went back to first for the restart, as no laps were completed.

Once out front, Friesen went to work on the cushion. Britten held close for some time, while Max McLaughlin and Billy Decker went back and forth for third behind them. Down the stretch, it was all Friesen, as he motored away for the first Super DIRTcar Series win of the season.

“It was a very technical track,” Friesen said of the Volusia surface. “It was about the closest to a wingless sprint car that I’ve ever ran a Modified, I had no right front grip and just backed it in every lap. We had a great race car, but got so lucky on that restart, I lost the right front and was just a sitting duck from there. After that, it was all on the cushion, but traffic was tough because every time I had to get off it I just pushed, so I had to be careful.”

Britten has already made three starts in 2021, but is already on his second Bicknell chassis. A hard flip in the first lap of the first feature meant his first chassis was sent home in pieces – the remains of the car boxed up in a handful of plastic totes. Tonight was the first night with the new piece, and Britten ran well.

“I definitely didn’t want that yellow after I got to the lead,” Britten noted. “Friesen was quicker, but I felt like we were close so it would’ve been interesting to see what would’ve happened if it stayed green. I’m just tickled to be here, we destroyed one at Bubba and it was a ton of work and long nights just to be able to race tonight, so to run well and finish second feels good.”

Decker had a see-saw battle with McLaughlin for much of the race. The traffic fell in favor of Decker at the end, and Decker got the last podium spot.

“It was a tough track just blazing the outside that hard,” Decker said. “Happy to come out of that one third in the first race for the Gypsum team this year. It was a lot of back and forth the second half of that one with McLaughlin in traffic, but we scrounged up a third to end it.”