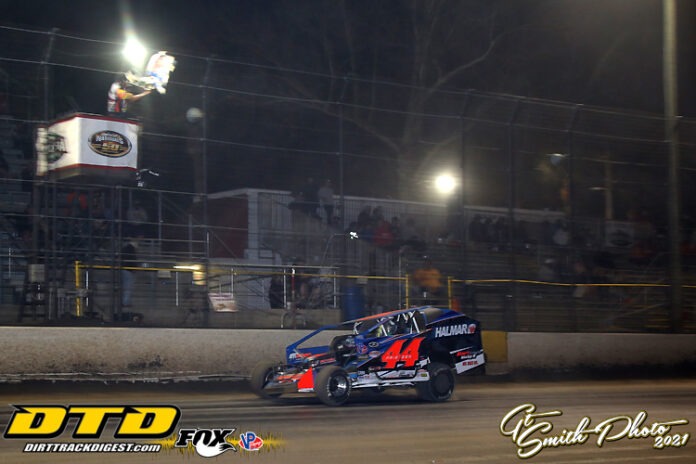 BARBERVILLE, FL – Stewart Friesen bagged his second win in two tries in the DIRTcar Nationals, taking victory in the Super DIRTcar Series feature. After starting eighth, Friesen picked his way through the field and snatched the lead from Erick Rudolph two-thirds of the way through the event to grab the victory.

Max McLaughlin and Rudolph went to battle at the start of the 30-lap feature, trading the lead back and forth through the first handful of laps. It wasn’t until the leaders hit traffic on lap nine that Rudolph solidified his lead, with McLaughlin filing into second. Jack Lehner and Friesen followed behind McLaughlin, with the pair drawing close to McLaughlin through the lapped cars.

For a moment, Friesen went to second, but then lost the spots to McLaughlin and Lehner by halfway. At halfway, Rudolph’s lead was a steady second and a half, but a lap 18 yellow erased the traffic and the lead. Lehner slipped up on the restart, Rudolph and McLaughlin got a good launch, and Friesen fired excellent, with Friesen driving to second when race pace resumed.

With Rudolph low, Friesen went to the middle and took the lead on lap 20. Friesen quickly put a solid second between himself and Rudolph, but Rudolph stabilized the gap and held Friesen at a steady distance for the time being. Behind the top two, Mike Maresca and Billy Decker were gaining ground and catching McLaughlin, with Maresca sliding by McLaughlin to snag third. Out front, it was all Friesen, as Friesen walked off to his second win in two starts in the DIRTcar Nationals.

“This one is all on my team,” Friesen said. “We had a plan coming into this one, and like we say we plan our work and work the plan. This was a technical and challenging track, you had to get the car loaded up right, and if you didn’t, you just shoved. I felt like my biggest challenge was figuring out which direction people were going, some places were slick and others looked slick but had bite. It was an awesome track, very challenging and fun to run on.”

Rudolph led around half the race but ultimately settled for second. While leading and not winning is always disappointing, it was still an improvement over the opening night.

“We started third, got to the lead after a fun battle with Max,” Rudolph stated. “We were getting through traffic good and didn’t want to see that yellow, but it made a race out of it. We seemed similar speed to Friesen after we moved up, but the race just didn’t fall our way in that one.”

Maresca made a big improvement over the first night of competition, driving forward to round out the podium.

“We made a ton of changes after last night,” Maresca said. “We totally reworked our shocks, we struggled hard last night but with a ton of support we were able to make the right changes to get a good piece for tonight and hopefully the rest of the week.”

McLaughlin had to settle for fourth with Decker having another strong run to finish fifth.