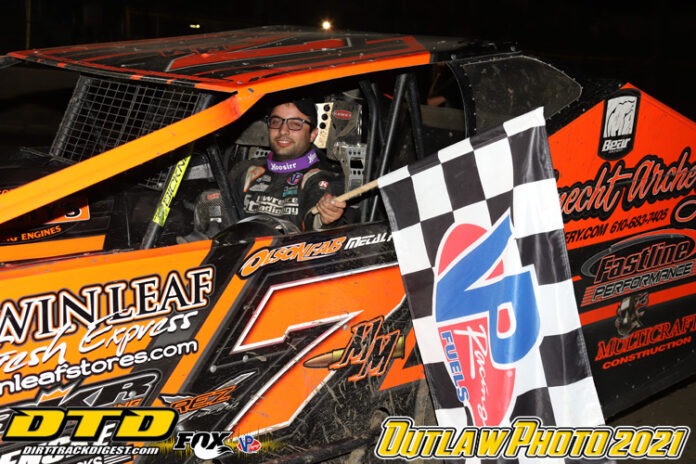 BARBERVILLE, FL – Mike Maresca held off Matt Sheppard for the entirety of the 30-lap Super DIRTcar Series feature at Volusia Speedway Park, scoring his first victory with the series in dominating fashion. 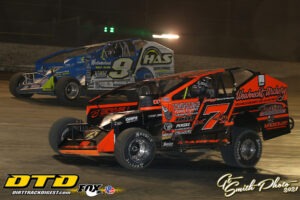 It was Maresca jumping out in front of Sheppard at the drop of the green, with Maresca low and Sheppard high. For the first handful of laps, Sheppard was all over Maresca, but by lap seven, dropped to the bottom behind Maresca. On lap 11, Maresca slipped off the bottom as the leaders hit traffic and Sheppard nearly filled the gap, but Maresca shut the door just in time to keep Sheppard in second.

As the track was locking down to the bottom, Maresca got by a few lapped cars. Sheppard got stuck, and Maresca built up a big lead by lap 20. However, a caution with seven laps to go erased both Maresca’s lead and traffic. With clean track and clean air, Maresca kept up his rapid pace and held Sheppard at a safe distance during the final laps, with Maresca taking his first Super DIRTcar Series win. Sheppard finished second, while Billy Decker, Billy VanInwegen, and Peter Britten completing the top five.

“We’ve been really close these past few nights,” Maresca said. “Our first night we were awful and totally regrouped. We got a new package from Penske Shocks, their support has been really good this week. It feels like we’ve been down here in Florida forever now, so I’m super happy to get a win for my crew for all their hard work. I know it rubbered up and all, but we had such a stout racecar we were going to be good in any circumstance.”

It’s been a tumultuous 24 hours for Sheppard, but an uneventful second is exactly what Sheppard needed.

“It was a good night,” Sheppard stated. “We tried to give Mike a run but couldn’t clear him those first few laps. Overall, I think he was a little better than us so when it took rubber, we latched on to the bottom and just kind of hung on.”

Decker has been a model of consistency all week, notching another podium.

“We like parking on the frontstretch here, but would like to be a little further down,” said Decker. “We’ve been consistent all week, qualified hit or miss, but have raced real well which is the important part. That has me excited to get the season going for sure.”