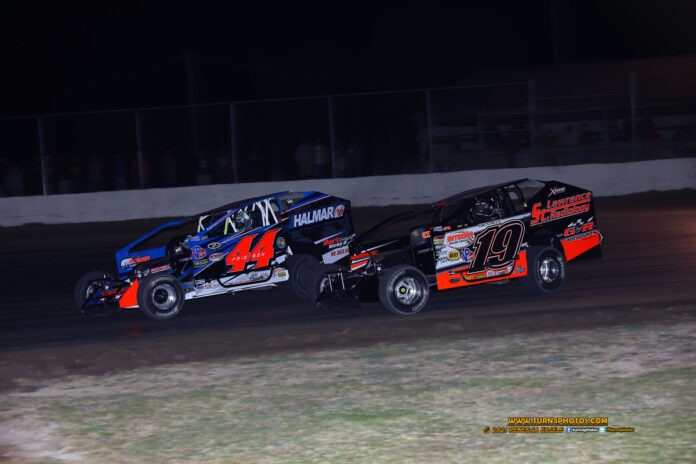 LAFARGEVILLE, NY – Stewart Friesen came out on top of a late-race duel with Tim Fuller to nab the W at Can-Am Speedway. Friesen snuck by Fuller on a restart three-quarters of the way through the feature event, then held off all of Fuller’s advances to take home the $7,500 paycheck.

Fuller grabbed the lead from Max McLaughlin at the start of the 100-lap feature, with Fuller instantly proving he would be contender by quickly building up a comfortable lead. Erick Rudolph slipped under McLaughlin for second on lap 12, while Larry Wight filed into third soon after. By the time Rudolph reached second, Fuller was up by over a half straightaway, but a lap 17 caution negated Fuller’s lead.

Rudolph didn’t let Fuller run away on the restart, holding a steady five to six car lengths back. Wight fell off the pace of the top two, watching their battle as Friesen closed in on him. While the leaders caught traffic, lapped traffic seemed to be of minimal concern, as the front duo of Fuller and Rudolph ran the top, while the lapped cars chose the bottom. Rudolph began to apply pressure to Fuller, taking a swing at the lead on lap 38, but Fuller held him at bay.

As Rudolph hounded Fuller, the third and fourth place cars of Wight and Friesen slowly closed in. Eventually, Rudolph couldn’t keep pressure on Fuller, and Fuller began to pull away, but that only meant Wight and Friesen were closing faster. With Fuller’s lead growing to roughly two and a half seconds, Wight and Friesen had caught Rudolph.

On lap 70, Friesen snuck under Wight for third, but at the same time, Rudolph momentarily lost power. This allowed both Friesen and Wight to get by, but Rudolph could only get the car back to full speed for a moment, as he slowed and retired to the pits by the time he reached turn three. With the caution waiving, this meant Friesen would restart alongside Fuller on the front row.

While Fuller did not want to see the caution, he really did not want to see the restart, as Friesen beat Fuller to turn one to snag the lead. From here, it was Friesen’s race to lose, but Fuller wasn’t letting Friesen walk away with it. Fuller hung within striking distance in the latter stages, but in the final circuits, Fuller hit the afterburners. However, it was too little and too late, as Friesen crossed under the checkered half a second ahead of Fuller to win the Super DIRTcar Series points opener. With Fuller second, Wight, Billy Decker, and Tim Sears Jr. completed the top five.

Can-Am Speedway was in an odd situation, fighting a soft, sinking springtime surface, but also the sun of an 80-degree day. To avoid rearing the ugly head of the springtime conditions in spots of the track, the track was prepped conservatively, but dried out quickly. This meant a full and total rework after heat races to create a racier track, and a track night and day from what was seen in qualifying.

“They totally reworked and graded the track after the heats, but luckily I’ve been here enough to know how this place races and what it was going to do,” Friesen stated. “It was kind of a wildcard track with some spots being soft and the majority of it being rock solid, so some laps you’d hit the soft stuff and get a good run, but other laps just bounce and lose your momentum. The track did start to lock down a little at the end in one and two, but overall the work they did on it worked and we were able to move around and race.”

Undoubtedly, the defining moment of the race was the lap 74 restart where Friesen took the lead from Fuller. Both cars were extremely equal, which meant any advantage for either needed to be capitalized on. In Friesen’s case, this advantage was found on the restart.

“Tim is always strong here, this is his backyard,” Friesen said. “I just needed to get the best launch I could, and luckily it was an even slick from top to bottom. We were able to start right together and pull a little pinch on him, which got us the clean air and control of the race. With us being so equal that’s what we needed to hang on.”

Fuller led an unofficial 73 laps, but didn’t get the trophy. While Fuller was disappointed, he still left the track with a solid hunk of money.

“Once we got into traffic, we all were starting to file into a similar lane,” noted Fuller. “That gave a big advantage to me and we we’re able to make a run at him, but it all just came back to that restart. I was even with him but he got the jump and that was that.”

Shadowing the battle of the top two was Wight, who ran a quiet race at the back half of the top five much of the event.

“I definitely enjoyed coming up this far north and have it be this nice in early April, track included,” Wight said. “Lots of times I’ve seen a track get reworked that hard and turn into a total dustbowl, but they got the water in there well and it wasn’t dusty at all. It ended up being an enjoyable race and something to build off of.”