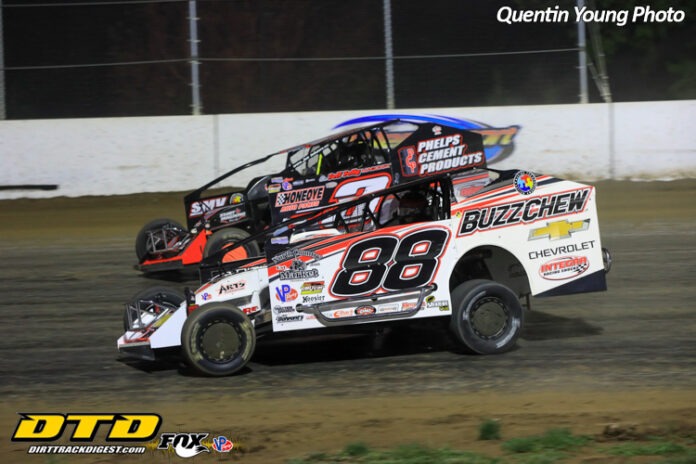 WEEDSPORT, NY – Mat Williamson surprised himself Sunday night by turning his Super DIRTcar Series season around with a win at a track he’s traditionally struggled at.

Williamson, from St. Catharines, ON, hasn’t hidden from his recent struggles on the tour after notching only one top five in the first four points races of the season.

“We’ve been disappointed with our start,” Williamson noted. “I haven’t had a good year. We struggled in Florida and then had a big win in Pennsylvania. We had passed Stewie [Friesen] and we felt like we were on top. He sets the bar very high. Then we came back up north and got our rear ends handed to us.”

Like the 2021 season, Weedsport has not been particularly kind to Williamson and the Buzz Chew Racing team.


“We’ve had success here in the 358,” Williamson said. “We’ve had some top threes and top fives. But we always struggle here. When we run third in a Series race it’s because we started on the pole and that’s not good.”

But tonight, Williamson reminded himself why he is among the elite drivers in the Super DIRTcar Series.

“Tonight we passed Stew [Friesen], Matt [Sheppard], Billy [Decker] and Jimmy [Phelps]. Those are four very good cars so we’ll take that any day of the week,” he said.

Williamson was on a mission throughout the 100-lap Feature in his #88 machine, battling tooth and nail for both position and to get through lapped traffic.

The first 83 laps of the Feature went caution-free. During that time, outside pole-sitter Billy Decker took the lead from Jimmy Phelps and proceeded to lap the field up to 10th position, leaving Williamson, Friesen, Phelps and Haers just trying to keep him in view.

Decker outdueled Phelps in the opening laps running side-by-side. Then it was all lapped traffic for 60 straight laps. Few could navigate the pack like “The Franklyn Flyer.”

“It was a lot of fun,” said Billy Decker, driver of the #91 Gypsum Racing Big Block. “It looked like it was going to be a one-groove race track but it was wide, racy, and fun. I hope the fans enjoyed it. We’ll take second and go on to The Valley.”

“Money Mat” Williamson benefited from having a different setup than Decker to claim the $7,500 check.

Decker knew when the late-race caution flew that he was in the sights of some hungry, talented drivers. If the race had gone 100 laps without a caution, the #91 may have won by more than half a track length.

Unfortunately for Decker, the Lap 83 caution was the last thing he needed.

“The times picked up after that restart,” Decker noted. “We picked up three-tenths of a second but Williamson picked up a full second. It was a little strange there but we had a great race car nonetheless.”

An exciting last-lap pass awarded driver Stewart Friesen, from Sprakers, NY, third place. The #44 found its way to the top lane early on but more out of necessity than design.

“We were halfway decent but we just missed it a little for the Feature,” Friesen said. “We were fast out of the box tonight but we made some changes and I don’t think we went in the right direction. We’ll put that in the notebook for next time. We were lucky to get that last caution which scuffed the tires up a little bit to get the seal out of them and get rolling on the top. We salvaged a third.”

Friesen started fourth and was in constant battles with the rest of the top five. However, he could not get the Halmar Racing Big Block Modified to hold the bottom to put pressure on the top two.

“We weren’t able to roll the middle like Decker and Williamson,” Friesen said. “When I went down there I would just skate and slide. I didn’t plan to run the top because I overheat the tires and the seal over and I dropped back. Which is what happened. I had to live and die by the top.”

The early going showed Friesen fading a little after getting around Matt Sheppard for third but he never fell completely out of reach.

“It was awesome to be back here at Weedsport with fans in the stands,” Friesen said. “It’s a great event for the speedway and we’re happy to be New York racing.

Justin Haers, in the #3 Big Block Modified, had an epic battle with Friesen in the closing stages while racing on a flat left front tire.

“I noticed my left front was flat with about 30 laps to go and that was not a good feeling,” Haers said. “It was my fault. I got too low and clipped the jersey barrier with the left front.”

Haers was a threat to win but with a flat left front, it was all he could do to hold off the #44 and did so until the final lap.

“Before the flat, I thought I was coming back to Mat [Williamson] in second,” he said. “I could have raced with the top three. Who knows if I had been on the outside for the last restart maybe I would have been in contention at the end. We’ll take fourth.”

Friesen nearly knocked the walls down trying to find a way around Haers.

“I knew Friesen was back there,” Haers said. “I figured he was trying to set me up. Going down the backstretch I had the wheel turned all the way to the left and I had to be really careful to not drive in too hard or not hard enough. The car would either shoot left and spin me out or shimmy right up the race track. It was doing a lot of weird stuff. Every single guy in the pits has driven with a left-front flat. They know what it’s like.”

Mike Mahaney had a mix of good and bad fortune. First, he placed second in his Heat Race and made the top 12 redraw. Then he drew 12th, which comes with a free Hoosier Racing Tire. From there the #35 Adirondack Auto Big Block was on the move and possibly even coming for the leaders late in the race when a battery cable failed while pacing under caution and forced him to settle for a 23rd place finish.

Matt Sheppard was the Billy Whittacker Cars Fast-Time Award winner after clocking the fastest lap out of 43 Super DIRTcar Series Big Block Modifieds at Weedsport. He ended the night seventh.