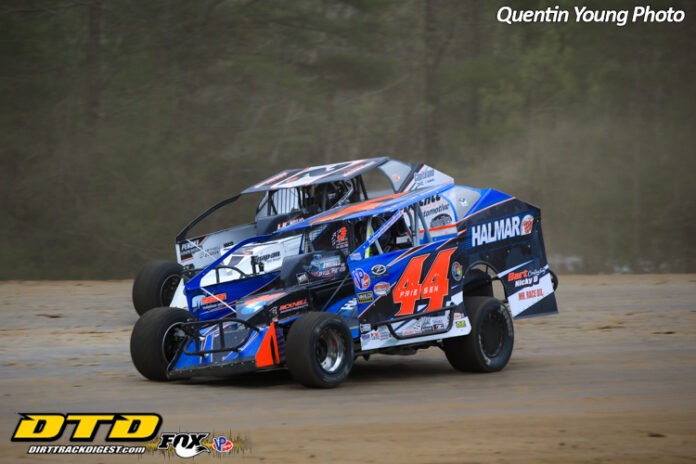 Call them what you want – Syracuse qualifiers, Schaefer Qualifiers, the CRC Series, the Advantage Auto Parts series, the Super DIRTcar Series – they bring the best drivers in the Northeast to the historic track on Route 9 in Malta and always produce crowd-pleasing, on-the-edge-of-your-seat racing.

That tradition will continue on Tuesday, June 22, when Albany-Saratoga Speedway will be the site of Horsepower 100, the first of two Super DIRTcar Series races to be held in Malta this year.

The relationship between former Albany-Saratoga promoter C.J. Richards and the DIRT organization was sometimes prickly, but DIRT was well aware that Richards’ Shootout Series, which was first held in 1977, drew many of the big-name drivers from New Jersey and Pennsylvania to upstate New York, and that’s the type of field they wanted for their Schaefer Qualifiers.

The first official Schaefer Qualifier at Albany-Saratoga Speedway was held in 1978, with Tommy Corellis getting the victory. Win Slavin finished second and Jack Johnson was third. Because Corellis already had a guaranteed starting spot for the Schaefer 100 in Syracuse, Slavin became Albany-Saratoga’s representative.

Then the big man took over. For the next two years, Kenny Brightbill, the legend from Sinking Springs., Pa. hauled into Albany-Saratoga, and walked out with a guaranteed starting spot for Syracuse.

But he didn’t dominate either race.

In 1979, Johnson, who would go on to win the Schaefer 100 in October, had the lead in the qualifier at Albany-Saratoga, but blew a tire on lap 72, giving the lead to Brightbill. He stayed out front the rest of the way, leading C.D. Coville and Corellis across the finish line.

Brightbill needed even more luck in 1980. In the 100-lapper. Dave Leckonby, driving the Helwig No. 37, grabbed the lead on lap 16, and appeared on his way to an easy win, opening up a half-a-track lead over Brightbill. But everything changed on lap 86, when Don Kreitz Jr. blew his motor to bring out the yellow.

That gave Brightbill another shot at Leckonby, and on lap 92, Leckonby bobbled in the first turn, opening the door for Brightbill to get the lead.

“I just pushed it too hard and it drifted too far,” said Leckonby after the race.

Leckonby’s slip-up also allowed Coville to move into the No. 2 spot, but on the last lap, Coville got caught behind a lapped car in the third turn, enabling Leckonby to nip him at the finish line for second.

“I couldn’t see anything out there,” said Coville. “I had used all of my tearaways and with the shield I’ve got, it scratches like crazy when you wipe it.”

The 1980 race was tough on equipment. Johnson, who went into the race as the CRC Series points leader, got into the loose stuff on the backstretch on lap six, and was the first car out.

Will Cagle started 25th and made his way up to sixth by lap 25, but went out shortly thereafter with overheating problems. Lou Lazzaro started losing his brakes on lap 47, and dropped out seven laps later, when he was in the third spot on the track. Jimmy Horton, who started on the pole and chased Leckonby for about 50 laps, dropped out with power steering problems.

Johnson would get his redemption in 1981, when he won his first Schaefer Qualifier at Albany-Saratoga, outrunning Brightbill and Will Cagle.

The next time Albany-Saratoga hosted a Syracuse Qualifier was in 1984, the only year the track was sanctioned by DIRT. Horton won that race, with Johnson second and Dave Lape third.

Richards’ decision to do away with big block motors prior to the 1985 season brought an end to the Syracuse qualifiers at Albany-Saratoga until 2009, when Billy Decker won the 101-lap Advance Auto Parts Series qualifier.

Beginning in 2012, Brett Hearn’s “Big Shows” brought the Super DIRT Series back to Albany-Saratoga on a regular basis. Bobby Varin drove his Andy Romano-owned Glen Ridge car to a huge upset victory in 2012.

Stewart Friesen had one of the most memorable wins in 2019, when he rocketed past Hearn coming out of the fourth turn on the final lap to get the win. Because that was “Big Show 11,” Hearn had extended the race to 111 laps. He had been leading the race on lap 100, but could only watch as Friesen earned the winner’s prize of $11,111.

Friesen also won “Big Show” Super DIRT Series races in 2016 and 2018, making him the only three-time winner of the qualifiers at Albany-Saratoga.

More recently, Demetrios Drellos led all 100 laps to win his first Super DIRT Series race ever in 2019 that highlighted the three-day Massive Malta Weekend in September, and last year, Anthony Perrego won the 60-lap OktoberFAST race to kick off the six-race season-ending series after most of the original Super DIRTcar Series schedule had been wiped out by the COVID-19 pandemic

Although many of the original stars of the Schaefer Qualifiers at Albany-Saratoga Speedway are retired or have passed away, you can be sure that a new chapter of the rich history will be written on June 22.