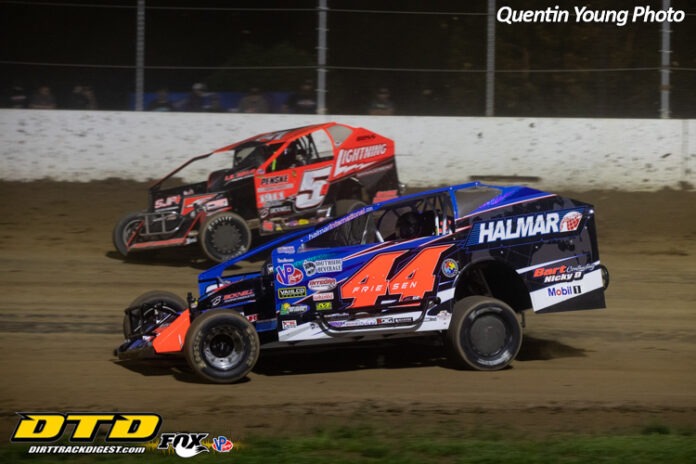 WEEDSPORT, NY – Stewart Friesen continued to bolster his Super DIRTCar Series points lead with his third win of the season on the tour in the Hall of Fame 100 at Weedsport Speedway. Friesen started fifth on the field and marched forward early to take the lead by mid-race, taking a dominating half-track lead over the field to secure the win.

37 Super DIRTcar Series Modifieds filled the Weedsport Speedway pit area on a warm and muggy evening. The sun was hot, but a welcome change of pace from the nasty weather that has kept racing limited during most of July. World Racing Group CEO Brian Carter paid a visit to the event tonight, speaking to the drivers in the drivers meeting. Notably, Carter announced that the 150-lap 358-Modified race at Oswego for Super DIRT Week will move to an evening time slot on Saturday.

When the feature rolled onto the track, it was Tim Sears Jr. and Max McLaughlin leading the field to the green flag. McLaughlin quickly found pace on the top side of the speedway as the field took the green flag and promptly stole the lead from Sears as the field completed lap one. A heavy track surface greeted racers at Weedsport, and McLaughlin used the cushion to his advantage early on. Stewart Friesen was doing the same, as he quickly worked his way around Chris Hile and Mike Mahaney to claim third in the early stages of the race.

Lapped traffic became a factor on lap eight, as McLaughlin already had to work his way around lapped cars. Four laps later in traffic, Friesen caught the Sears Jr. No.83x, starting a multi-lap battle with Sears for second. Behind them, Tim Fuller was charging through the field, as he worked his way around Hile to take fourth. Billy Decker wasn’t too far behind, as the Franklin Flyer had muscled into the top five after starting 12th. Friesen completed the pass for second on Sears Jr. on lap nineteen.

Friesen quickly set to work on reeling ‘Mad Max’ in, and he was hot on his heels as lap 21 clicked off. Friesen looked low in lap traffic but could not get enough of a run to pass McLaughlin. On lap 27, Friesen seemed to have the top spot in the bag, but a pick-and-roll by McLaughlin with the lap car of Demetrious Drellos propelled McLaughlin back into the race lead. Behind this battle, Matt Sheppard was on the charge from his 11th place starting spot. He drove past Hile, Fuller, and Sears Jr. to take third. Sheppard worked his way up to the top two tango at the front of the pack. As he came within striking distance of the battle, Friesen finally made his pass for the lead on McLaughlin stick on lap 37, taking the lead away.

A yellow on lap 44 bunched the field back up for a restart after Jack Lehner broke in turn four. On the lap 46 restart, Friesen did not let McLaughlin get such a good run into the first turn, as Friesen powered away from McLaughlin into a comfortable race lead. The race quickly went back under yellow, however, as the No.9x of Tyler Trump found the outside wall in turn two, which broke the rear-end. Trump was towed back to the pits, and the field restarted once again on lap fifty-three.

On the lap 53 green, McLaughlin fired off very well and was able to pass Friesen as the field worked into turns one and two. Sheppard, looking to capitalize on the situation, tried to dive under Friesen in turn two, but the No.9s caught the inside wall, doing damage to the front end and forcing Sheppard to stop on the backstretch to bring the caution back out. Sheppard returned after a trip to the pits, but saw his race practically end as he restarted dead last because of the incident.

Friesen would not let McLaughlin take the lead on the ensuing restart, as Friesen drove down into turns one and two to re-assert his lead over the field. Behind the top two, Sears Jr. and Fuller started a small battle for third. Sears Jr. lost the spot to Fuller at first, but claimed the last step on the podium back for himself on lap 59. The top three pulled away as the battle raged on for forth and fifth. Larry Wight and Chris Hile traded places on multiple occasions, but both lost a spot to Erick Rudolph. Rudolph, who had to start the race from the parking lot in 24th position, worked his way around both Wight and Hile to take fifth. With five laps to go, Rudolph improved to forth after passing Fuller for the spot. At the checkered flag, Friesen took a commanding win with a half-track lead, over McLaughlin, Sears Jr., Rudolph, and Hile, who nabbed fifth at the line over Fuller.

“The track was awesome,” said Friesen post-race. “We were trying to keep the car balanced tonight, and make sure we didn’t lose the tires over the 100-lap distance. I saw the packer trucks making ripples in the track and knew that the track would be fun tonight. When it builds the curb up top you can move around and race up top and down low. It was right up our alley, the Halmar team did a good job, and its part of a great weekend for us.”

Of the battle with McLauaghlin he said,

“It was tough racing Max in lap traffic.  We were good on the bottom, and I could keep pace with him early, getting up top when I needed to. It was a gnarly race. We were able to move around a lot to get through the traffic and it helped us big tonight.”

“It’ll be interesting to see what happens at the end of the year with the points”, added Friesen, who is currently leading the Super DIRTCar Series points. “We have a few conflicts with the series; namely the Fonda 200 and a race at the World Finals I’ll miss because I’ll be racing the truck at Phoenix. The weather could play into that and help us out. We’re going to keep running the series and get all the points we can, and hopefully it works out for us in the end.”

Despite being the points leader, Friesen technically cannot win the Super DIRTCar Series championship as he is not a full-time ‘Platinum’ driver with the tour. The title would go to whoever is in second place in tour standings. Coming into tonight, Matt Sheppard holds the second spot and is in line to ‘win’ the title if Friesen is leading the points at the end of the year.

Max McLaughlin had a strong car early, but just could not hold off a hard-charging Stewart Friesen.

“We were really good early,” said McLaughlin. “We had a really good car that was a touch too free in the corners. We’re still looking for some drive out of this car, we needed to go more aggressive on the setup and tires tonight. We’ve been struggling lately, so it feels really good to compete for a win with Friesen.”

Mclaughlin was able to move around throughout the race with his No. 32c.

“The outside worked really well for us,” said McLaughlin. “The bottom became the better groove later, however. On the restart mid-race, I was able to find some bite in the middle and shoot around Friesen to get the lead. I don’t know if I could have held him off. I didn’t want to see that caution come out. Friesen had a better car than us tonight. Second is good for us though, good for the points and hopefully we can take this momentum into Orange County on Thursday.”

Tim Sears Jr. snapped a skid of struggles on the Super DIRTcar Series tour with a third-place finish.

“I figured McLaughlin would be fast on the top at the start,” said Sears Jr. “The top was really good at the start, as long as you overshoot the turn it was fast. I decided to run the bottom to save tires and try to stick with him so we could have something for them at the end.”

Sears was coming off a win at Weedsport the last time the Modifieds were in action and a win on Friday night at Brewerton Speedway.

“The last race here was similar to tonight in how the track was,” said Sears Jr. “We won that race and ran good again tonight. We didn’t even make a single adjustment on the car all night. We raced Brewerton Friday and ran well there, and we didn’t touch it there either. We’ve got something going here. We’ve been hit or miss so far this year in the big races. We started off good and got into the top five in series points. We struggled here and there, we’re always somewhere in the mix. Some nights we’ve had a lot of speed and other nights we’ve had none. We keep plugging away though, and we are getting faster. I think the amount of seat time we get has helped us a lot as well.”

Gary Tomkins had a solid run in the Beyea Headers 121. After losing the engine in the Rauscher-owned 84 at Ransomville, Tomkins ran the 121 in the top ten for most of the night. He finished 14th.

Pat Ward was inducted into the DIRT Hall Of Fame this past week. The journeyman driver has enjoyed a lot of success throughout his career, but he found himself in a consolation race to try and make the show. Ward held a transfer spot right up until the checkered flag, when Danny Johnson slid in front of Ward to take the spot away. It was assumed that Ward would get to start the race via a provisional, but surprisingly Ward did not receive one. It was a perplexing move to not provide a provisional for Ward, who despite not technically making the race deserved to be out there at a race event that is designed to honor him and other legends of the sport.

Two freak accidents marred the night’s racing action. Nick Guererri took a violent ride down the front stretch after contact with Cody Manitta sent the No.25g into the black steel rail that protects the catch fence. Nick climbed out on his own but went to the hospital where it was found that he has a concussion. The bad night for the Guererri’s continued, as Matt Guererri’s night ended in the turn three pileup that collected Tim Lafler and Tyler Stevenson. Hopefully it is a speedy recovery for Nick Guererri, a driver that has shown speed in the sportsman class all year long. Major accidents in the sportsman class have been more common than usual all year long. Regardless of what factors are causing these accidents to occur, something should be done to make sure no more sportsman drivers visit the hospital after a wreck this year.

The second accident occurred in the vintage race, with Loren Lincoln and Jim Hillmire making contact. Lincoln rolled his car violently, which happens to be owned by Hillmire. Lincoln was fortunately alright in an accident that did severe damage to his No.111 Antique class car.

On a more positive note, 33 vintage cars filled the pits of Weedsport Speedway. The Mohawk Valley Vintage Dirt Modified Series and Classics on Dirt fielded one of the most diverse and impressive lineups of vintage cars ever assembled to race.

The Super DIRTcar Series rolls into Orange County Speedway on Thursday, July 28th for the Battle of The Midway 100 during the Orange County Fair.