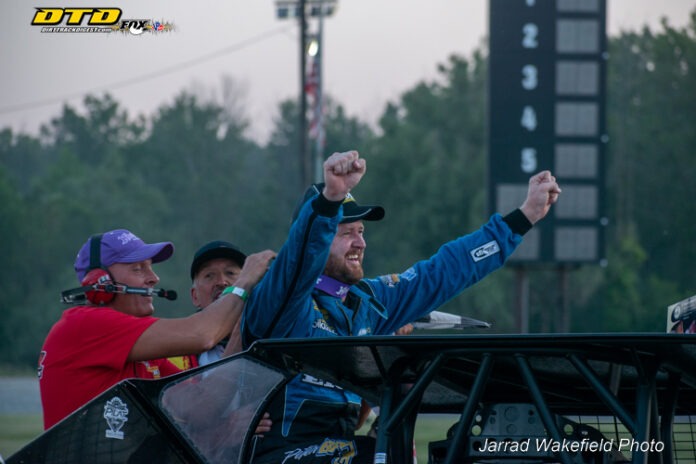 CANANDAIGUA, NY – The Super DIRTcar Series returned to Land Of Legends Raceway on Wednesday night in a rare double-features night for the tour. Two sixty lap feature events were put on display for a large crowd at the historic speedway. It was fitting then, that one of its’ most beloved regulars took the first feature win. ‘Batman’ Peter Britten took his first series win in 2021 at what many would call his Gotham.

“Our track time helped us a lot,” added Britten, who calls the Land of Legends Raceway his Saturday night home. “You can’t beat track time. We’ve had nights where we’ve been good and nights where we’ve been bad. We’ve taken everything we’ve learned from those nights and applied it here. It’s cool to get the opportunity to race here twice in one night. I’m super stoked to get back into victory lane with the tour.”

39 cars rolled into the Land of Legends Raceway for both features on the night. Five drivers did not return to race in their last-chance race; the most notable driver missing out of the bunch was Derrick McGrew Jr. However, the series gained four drivers in their place, with Jack Lehner making the trip to Land of Legends. Lehner missed the first attempt to run the race in July after destroying a car and getting a concussion in a violent crash at Albany-Saratoga Speedway in weekly action.

Britten and Tim Fuller led the field to the first green flag of the evening. Fuller jumped out to a modest early race lead over Britten, as the field fanned out two and three wide behind the pair. As the field raced into lap five, the yellow flew for Stewart Friesen. The series points leader slowed with a right-front flat on the No.44 ride that has been the car to beat all season long. Friesen changed the tire and return to the race at the tail of the field. Justin Haers also pulled into the pits under the yellow. He was able to rejoin the field before the green flag.

On the restart, it was Britten getting the holeshot into turn one. He drove around the top side of Fuller and slide back down to the bottom to claim the lead by the time the field completed lap nine. Behind them, a battle for third was brewing between Larry Wight and Mat Williamson. Williamson held the No.99L off for a few laps, but ultimately ‘Lightning’ struck, as Wight moved into third around Williamson by the completion of lap ten.

A few car-lengths behind the top four, Tim Sears Jr. was making a charge early. Sears Jr. had worked his way up into seventh from his twentieth place starting spot in only twelve laps. He was far from the only driver making an impressive charge through the field. Jack Lehner, who had to take a provisional to enter the race, was slicing through the field in a hurry. Lehner started twenty-sixth and had cracked the top ten by the time the race was halfway over. On lap thirty-two, Lehner passed Sears Jr. and Matt Sheppard to move up into seventh, and his charge was not done. He passed Wight and Williamson to move into fifth, which is where he’d finish in an impressive twenty-place romp through the field.

As Lehner was cutting his way to fifth, Erick Rudolph was on the move in the top five. He passed Williamson to claim fifth on lap thirty-two, and it did not take long for Rudolph for close in on the battle for third between Wight and Jimmy Phelps. Rudolph powered around the very top of the racing surface to pass both in the closing stages of the race. Rudolph used the lap car of Dave Rauscher to pick-and-roll Wight on lap forty-five and was able to carry the momentum on the top around the ‘Baldwinsville Bandit’ to get onto the podium by the time lap forty-six was completed. It only took six more laps for Rudolph to run down Fuller and drive by him up top to move into second.

Despite Rudolph’s best efforts, no one had anything for Peter Britten. Despite heavy lap traffic, Britten was unchallenged in the fifty-two-lap green flag stretch that ended the race. Britten pulled a considerable lead of nine and a half seconds to claim his first Super DIRTcar Series victory since the series visited Sharon Speedway in 2018.

Britten’s win has been a long time coming. The Australian has been strong all year, with a recent finish of second at Ransomville being his best on the season until tonight. His season has been one of consistency so far, always finding a way to be competitive on the tour, but tonight seemed like a bit of a breakthrough for the No.21a team.

“I knew we were good early,” said an elated Britten before his heat for the second feature. “I could feel the car getting good drive, we weren’t spinning the tires much at all. I thought I was going to get [Tim] Fuller on the start but he got away from me. He was really good, though, so I got in line behind him. Restarts are always a good opportunity to pass someone, and I got a better run than he did and it worked out for us.”

Rudolph struggled at the start of the year, but the mid-summer months have been good to him. ‘The Firestarter’ finally seemed to turn small embers of success here and there into a raging fire. Rudolph ran well at Ransomville, charged from twenty-forth to forth at Weedsport in the last Super DIRTcar Series event before tonight, made racing headlines after Post Malone wore one of his shirts at the Lollapalooza Music Festival this year, and brought home a second place in the first twin 60 at Land of Legends.

“We haven’t changed a lot honestly,” said Rudolph after the first feature. “We’ve gained a lot of confidence though. At the start of the year, we were running tracks we hadn’t raced a lot or tracks we historically struggled at. History kind of repeated itself in that aspect for us. At this point in the season though, we’re going to tracks where we have been good at in the past and we’ve been running well. Even the next few races after this, we’re going to some tracks we are familiar with and we look forward to running well in those races.”

Like Britten, Rudolph also calls Land of Legends home on Saturday nights.  He was the 2019 track champion at the speedway.

“Seat time is everything here,” added Rudolph. “It never hurts to have more time on a track, whether it’s a practice day or a touring series race. We felt pretty good in the first feature, we went quick time out of everyone in time trials for the second feature, putting us on pole for our heat. We are going to make a few minor adjustments, but this is a really good start for us today.”

Fuller started his night on the pole, but the long-time veteran still ran a strong race to finish third, continuing the consistency that has been synonymous with Fuller throughout this season and his career.

“I thought we could get back to the lead after Britten got us on the restart,” said Fuller at the end of the night. “As the first race went on, we kept getting looser and looser. We needed to tighten the car up, but the car was still pretty good.”

Fuller equated the track on Wednesday night to his home track on Friday nights.

“This place is not much different from Can-Am”, added Fuller, who is a regular at the Can-Am Speedway. “Both places get to a dry-slick surface, which is something we’re familiar with. It’s been dry up here, it was nice that the track was smooth and pretty racy most of the night.”

Jimmy Phelps finished in the fourth position while Jack Lehner charged from 25th to fifth.

The second show at Land of Legends promptly followed the first. The Super DIRTcar Series races at Orange County Fair Speedway in Middletown, NY next for the Centennial 102.