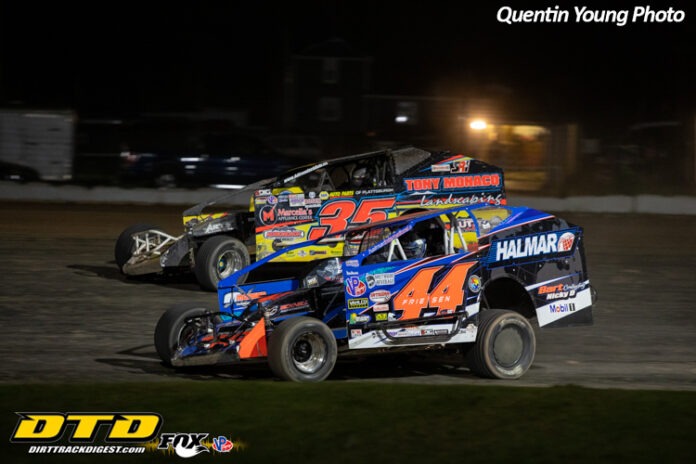 CANANDAIGUA, NY – The sun disappeared from the sky at Land Of Legends Raceway and was replaced with a starry sky, as the Super DIRTcar Series prepared for race number two on the night at Land Of Legends Raceway. The second event of the night differed from the first in a few ways, but the dominance of the winner was not one of them. Stewart Friesen wrestled the lead away from Mike Mahaney early and set the cruise control to win by five seconds over Tim Fuller and Mahaney.

“This place has been a thorn in my side for a lot of years,” said Friesen. “We won here a lot early in my career, I remember winning with Madsen here in 2005. It’s been tough since then; I haven’t raced here a lot since that time. We’ve got a really good package now, so tonight we just stayed on top of our wave and we’re looking forward to racing at Watkins Glen this weekend and keep the momentum rolling into Middletown next week.”

Mahaney and Friesen led the Super DIRTcar Series field to its second green flag of the night with Mahaney taking the early lead, but the race was red flagged as the field completed lap one. Larry Wight was turned exiting turn four, and the No.99L came to a stop right in front of the back of the field. Daniel Johnson basically had Wight fall in his lap, as a heavy impact with Wight sent to No.27j flipping down the frontstretch. Wight’s car was then thrown into the path of Justin Wright and Jordan McCreadie, sending Wight into his own violent flip with Wright landing hard on top of Wight. Fortunately, all four drivers walked away from the accident in a testament to modern safety equipment. All four cars suffered a severe amount of damage, leading to a lengthy but efficient cleanup effort to clear parts and fluid from the front stretch.

On the restart, Mahaney again claimed the lead with Friesen hot on his heels in second. Ronnie Davis III held third off the start, but quickly was challenged by Matt Sheppard for that spot. Despite many attempts for Sheppard to clear Davis, Davis held onto the final step of the podium in the early stages. The battle for third allowed Mahaney and Friesen to pull a considerable gap between themselves and the rest of the field.

Eventually, Friesen started to gain on Mahaney. Friesen started showing a wheel to Mahaney as the field completed lap ten and was full alongside Mahaney by lap thirteen. Mahaney pushed up the hill in turns three and four, allowing Friesen to clear Mahaney and take the lead for good. The racing action shifted to the midfield after the pass for the lead. Mat Williamson and Justin Haers swapped sixth and seventh numerous times throughout the race. In front of them, Sheppard not only caught back up to Davis again, but managed to pass Davis for third on lap twenty-five. Erick Rudolph followed Sheppard through, passing Davis two laps later to take fourth.

The yellow flag flew on lap thirty-four as Dave Marcucelli broke off the top of turn three with the rear suspension collapsing on the No.m1. The field was tightened back up for a lap thirty-seven restart. Friesen continued to lead after the restart, but the restart put Tim Fuller in the perfect position. Fuller charged his way into the top five on lap thirty-eight and continued to march forward. Fuller jumped to third in one move on lap forty-one and took second from Mahaney on lap forty-two. Rudolph pounced on the opportunity, following Fuller around Sheppard to take fourth on the same lap. The field settled in as the track started to lock down late, allowing Friesen to claim his fifth win on the year by well over a straightaway.

Friesen has been the car to beat on the Super DIRTcar Series tour all year long. Despite not technically being a full-time series regular, Friesen has been very consistent when he is not winning, allowing him to take comfortable points lead over Matt Sheppard.

“I was discouraged at first in the first twin 60”, said Friesen post-race. “I didn’t realize how good the car was until we started rolling back through the field after the flat tire in the first feature. This place was tough tonight, but the Halmar team was great. It’s a tough and busy stretch for us and our partners and team members have been putting in the work. We’ve been trying to dot our I’s and cross our t’s and just not miss anything.”

If there was an overall winner on the night, Fuller is at least a strong candidate. His third place run in the first feature was backed up in the second feature with a late race charge up to second to claim his second podium of the night.

“The team is what it was all about tonight,” said Fuller post-race. “Having enough guys to make the right adjustments quickly and get the car ready for another feature is a huge deal. On a night like this, it’s about being as perfect as possible. You can’t have car problems or tear up equipment, especially early in the night. It was a really demanding night for us, we knew it would be tough, but we prevailed.”

“We’ve been running well”, added Fuller. “We’ll see how we do at Middletown, we’re not entirely sure what to expect going down there.”

\Mahaney had a roller coaster of a night. Mahaney struggled in the first feature, finishing unusually far down the order in sixteenth. However, the second feature was a different story. Mahaney finished second in his heat and drew the pole, setting him up for a good night. While he couldn’t hold off Friesen or Fuller, a third place was still quite an impressive turnaround on the night.

“I was pretty down after the first feature,” said Mahaney post-race. “The car was just flat out not good. We were basically lapped traffic the whole first race. We got through that and kind of reset ourselves. We didn’t have a lot of time to change the car, but our changes worked. Mandee drew us the pole for the feature, which really helped turn our night around. It’s awesome to turn around and finish third after how bad our first race was. It changed our whole night.”

Mahaney, like everyone else, battled ever change track conditions throughout the night.

“The track changed quite a lot all night”, added Mahaney, who is a former regular at the Land of Legends Raceway with plenty of laps under his belt. “It changed a lot more in the second race than it did in the first race. It was hard to chase it, it hurt us a bit in the end. After the top went away and Stewart [Friesen] got by us, I had to move down a lane. I don’t know if we had a fast enough car to win, but I would’ve liked to see what would happen if we moved won sooner. It’s one of those things we’ll learn from and take note of next time we come here.”